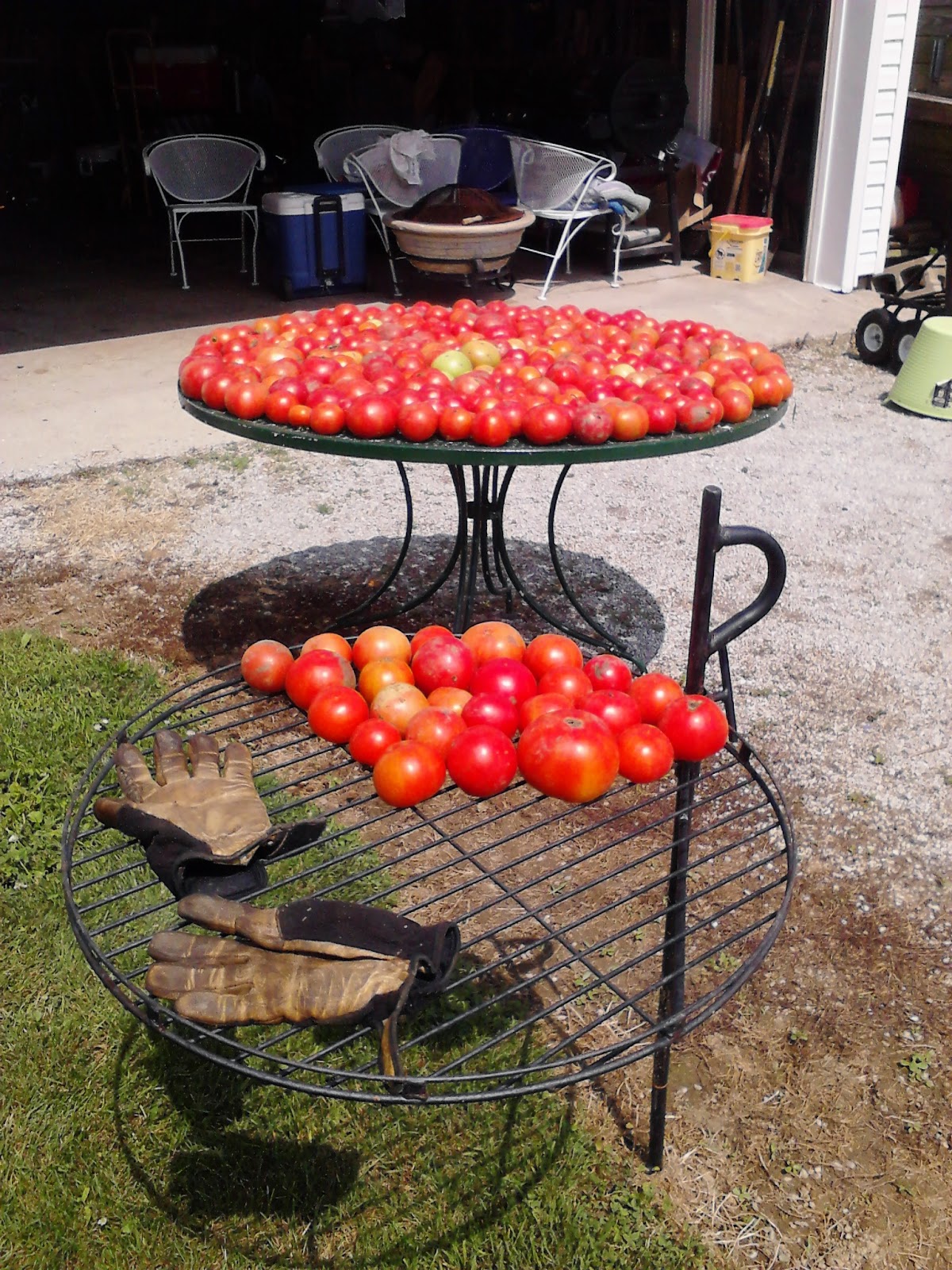 The tomatoes have started coming in on a daily bases of this amount. I have the blisters inside my mouth that shows I can't control myself with constant eating them or the cherry tomatoes. I finally got myself to at least drink water between them :) . A lot of the plants are starting to die off. That's okay as I have tomatoes that I canned last year still in the pantry. Just filling in the holes so to speak with this years.

The zucchini, yellow squash and cucumbers have died. I might get a couple cantaloupe yet, they are small but don't seem to be growing much.

The yellow wax beans and the first planting of state green beans are pretty much done. I will pull them this week and plant something for this late fall/winter harvest.

The second planting of state green beans and the KY wonder beans are starting to need picked every third day.

The Italian beans are just coming on but haven't started filling out.They were mislabeled as bush beans but are viners so I have a bit of mess of them.

I have some small heads of cabbage that will be ready in a few days. They are from the heads I cut instead of pulling the root out.

I downloaded to my kindle pc "Winter Harvest Handbook" By Eliot Coleman. To the dismay on my Hubby I have decided to try my hand again at a winter garden. The second year here I did one 4x4 (Square Foot gardening) and it was decent until Jan when the winds took it out. We have a lot of high winds here so I think I have figured out how to deal with it.

We have lots of doctors appointments and testing for Pat this week besides my own is going to be a juggling act to put meals on the table between those appointments, soccer practice (almost forgot that one) and the canning that I will be doing.

We will be spending Saturday at our oldest daughter's home to help them finish putting the fence up.

I would like to get some bread baking done but that keeps getting shoved to the bottom of the list. Going to have to suck up the heat and the time...maybe Wednesday when I have to keep Pat up later than normal due to the test the next morning . They want him tired...that's find except I don't do well at staying awake that late and then getting up earlier. I wonder which one of us is going to be the grumpy one.

I have some mending to do that I need to pull out the sewing machine for. Haven't gotten to that either.

Best get back to it, dinner needs to be done so we can get to practice.

Posted by Chef Owings at 3:55 PM No comments:

When there is a major loss.... 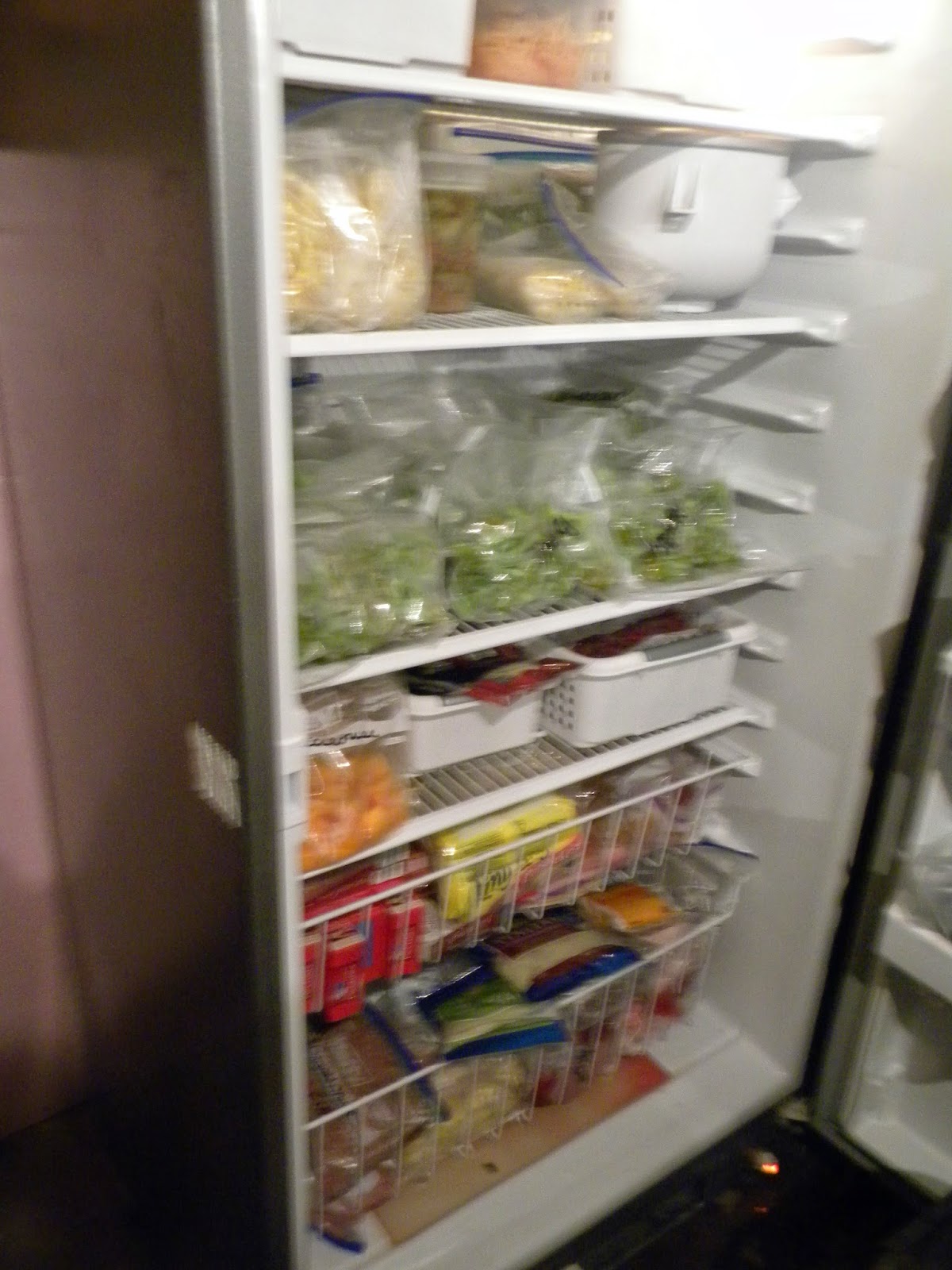 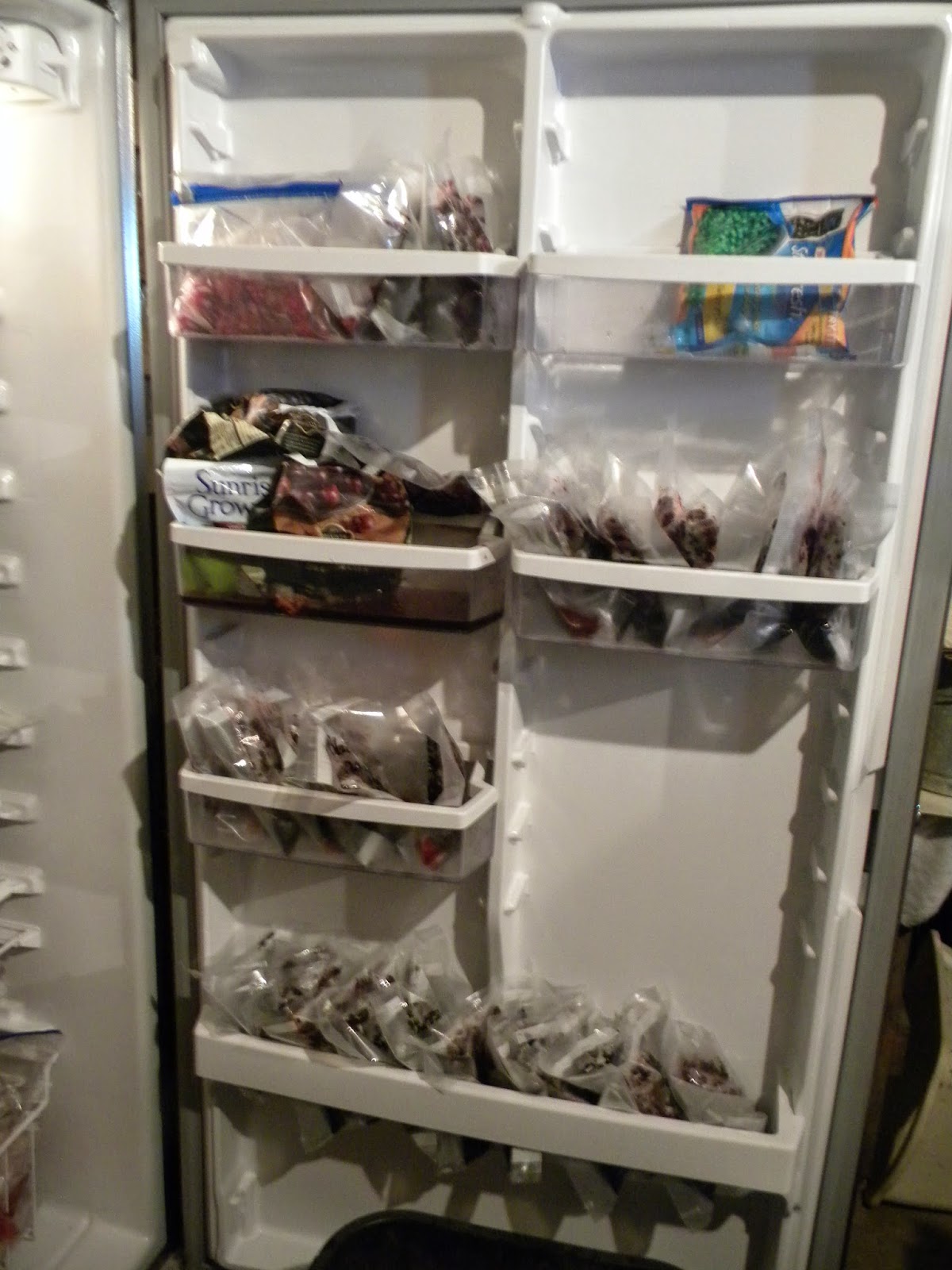 trauma trauma trauma...
what you are looking at is our main deep freezer that died and everything thawed and was very very warm when I found it.I am usually in it every day even if just to check on it since it's in the garage. Monday I wasn't and Tuesday morning I found it a very warm mess.

All of the broccoli, cauliflower, cabbage, zucchini,berries and melons etc. that I had harvested and preserved this year for this coming winter gone. All of our large roasts that was in the bottom drawer and the last of last year's corn gone.

This is a very serious set back for us.

First, that just wiped out 60% of our winter side dishes and 100% of the desserts. Second, those 10 large pieces of meat were a month's worth of entrees for lunch and dinner. Third,I won't be able to replace those veggies and fruit as they are not in season now and fourth...we can't afford to replace the freezer until late fall or maybe even next spring. So fifth, I don't have a place for turkeys,hams and prime rib roasts (I get it for Hubby for his Christmas present when it's on sale)come this fall. That is our main meat supply for the rest of the year.

We have already priced a new freezer so I know what we need to save.

I striped the old freezer of the shelves and drawers. I will use the shelves in the root cellar since I definitely will need to get that done asap so I can at least have some root veggies for fresh veggies this year.

My Daddy called because he had me on his mind and probably wished he hadn't after I downloaded my pity party. He reminded me that both him and Mother grew up with less, that Mother even went hungry and they both were fine and healthy. I needed to be thankful for what I do have, focus on what I can do (root cellar like my childhood) and take those steps.

I am also planting a fall garden, something we had decided against due to other commitments but now putting food on the table is the priority.

I an thankful that it was NOW and not after I loaded it with 6-8 turkeys, 4-6 hams and the prime rib roasts(depends on price and money flow on how many). 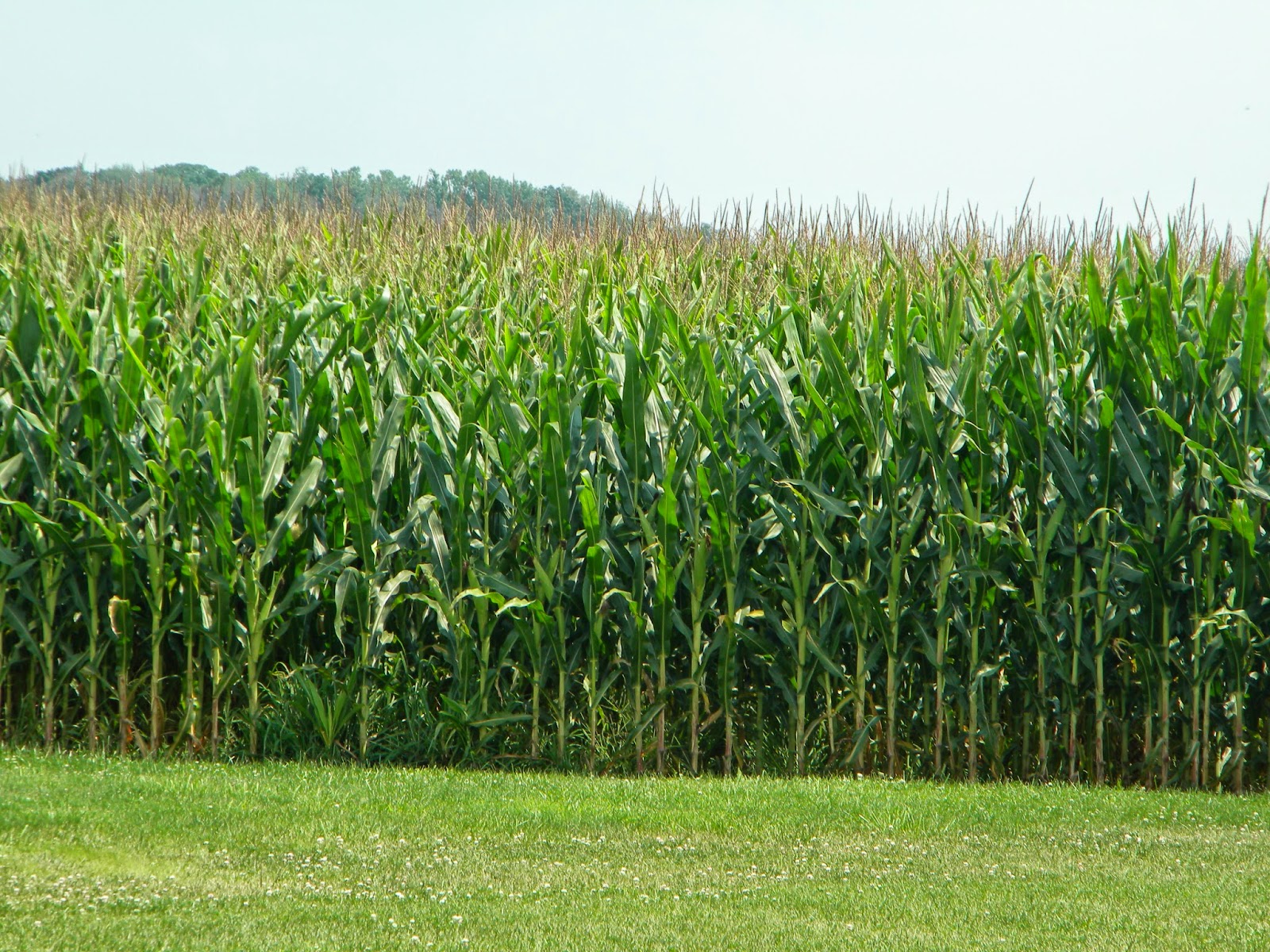 Row after row of field corn ripening in the warm sun of an August day.

This is my time of harvest and preparing for our home for the coming winter.

This year on top of that normal heavy work load we have custody of a young grandson and with us he has a totally different lifestyle and a lot of  counseling and doctor appointments to get through...with me right along beside him each step of the way. We have adjusted better to our changes in our routines then we thought we would.

The last few days I've been laid up from a procedure so I took this time to think about what needed to change to get it all done (yeah right) and smooth things out so I am not running in crisis mode (HEAVENS PLEASE).

First I did a Control Journal (www.flylady.net) for him. Broke down morning, afternoon, evening and bed routines as he does better with being able to read it as he doesn't do well trying to remember things even after doing them for the last 4 months. I also broke his room done into zones so he isn't trying to clean it all in one day, wasting his Saturday of play time.We set times as he has problem with time management. We are strict with that Sunday is the Day of Rest and Church. Even with me down today, he immediately asked if Granddad and him were going to church...YES!!!!!

Now I am working on my own Control Journal, a menu plan that has covers the entire day and lists the sides and adjusting the grocery budget as it almost doubled with having a person in the house with a sugar issue. Can't just fill that empty pit up with bread or grains when it sends sugar up. Already had to change my nightly glass of milk because he can't drink milk at night or his sugar is through the roof even with exercise....bike riding...for at least 30 min after. :(

I started updating my Christmas/winter holiday Control Journal...21 weeks to that as there will be extra "celebrations" and  more gifts under that tree including from Santa....another increase in the budget that has to be worked in.

I need to let some of it stew in my head of what days to do what with acknowledging soccer practice etc that is now in my life.

Posted by Chef Owings at 4:05 PM No comments: