I found 2 gift cards we had bought 5 yrs ago... didn't completely use... $24.64 lost due to cards out of date. I need to put gift cards in a different spot in my wallet so I see them when I get in my wallet.

I hung laundry on the line even though the day before was not dry yet. Now I have laundry hanging on shower rods and drying racks. Told Hubby I was not washing until it dries. We had 2 fogs back to back that didn't go away until almost noon and then no sun until after 5 pm.

Hubby needs a "lift" to finish the chimney and he wants it for the weekend (E is helping) that wont' happen until the end of this month or going into next month between their work schedules and when the lift is available. WHICH is okay as Hubby found he was short 4 pieces of the connecting pieces. Won't rent lift until those are in. BUT he at least has the price.

While out he checked at 3 places about his hauling.

We bought 2 meals from our small local store. Scalloped potatoes and ham with a roll. Fed us lunch and dinner. Hubby added a bit of the ratatouille to get more veggies in. Owner told him that she sells out on Wed (meatloaf) and Thurs. (beef and noodles) and Sat is always some sandwich (buyers choice) but the rest of the time she almost has leftovers to figure out what to do with.

After eating I wiped down the pasta sauce jars and Hubby took them down to the pantry. My cerebral palsy is flaring so I am stumbling.

We dropped off the propane contract for winter fuel. So that's off the to do list and to pay list.

Then while he went to deliver messages to Amish ( he now charges for that) I harvested. The chimney bill will be in by Saturday for Hubby to pick up. He asked if it could be ready Friday as he would be in that area then... they were okay with that so he wasn't making a special trip for it. 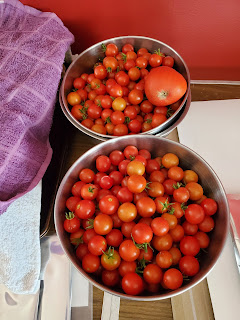 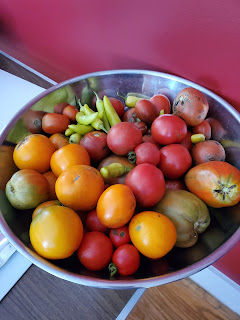 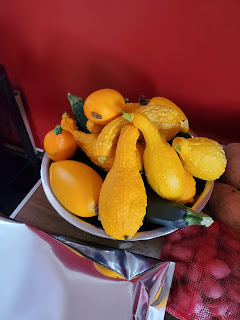 Hubby also harvested 6 tan pumpkins. AND there is at least 6 more out growing in his compost garden.

Cherry tomato vines are breaking when you bump them.

A&W called about the stove not coming in until Nov. But the coal was in and the next load would be more expensive. So Hubby arranged to go get it after supper as A isn't home until after 6:30  our time. We ordered 1 ton... A had extra come in and was expecting another semi to come in with more next week with more expensive coal. Asked if we would be interested in taking 2 tons if he gave us a discount, took 15% off. Yep we took 2 tons (4000 lbs.) of coal. Then had to unload it off the pallets on the trailer BY HAND as our tractor will not lift over 500 lbs. REALLY need a small pallet jack. Especially when the stove comes in. A offered to loan his as long as Hubby brings it right back.

Wasn't bad until Hubby dropped a 40 lb. bag of coal on top of the back of my right hand. He thought I had already adjusted the bottom bag and was in the move up pick up, turn and drop. Terrified he broke my hand... just really smoushed... not even a bruise, just tender this morning. He told me to make a fist and then decided he didn't want me to do that because I might use it on him LOL.

Since A got us a discount on the stove since it's not delivered like promised ... we have the total saved for it.

SO the only things we need to save for NOW is the 2023 medical and down payment (or total payment ) of what ever we buy to replace the truck . Everything else is either paid for or the money is in savings.

To keep from spending money I shouldn't... When we ordered something on the credit card that is off the grid item,  I wait until I see it has been sent, then I go in and transfer the money to the card as a payment. No worries of getting hit with a high credit card bill and no worries of spending money on one thing when it should have went for something else.

Plans for today.... shred squash for freezer, make eggroll filling for freezer. Might make egg rolls if I make the dough up. Can red cabbage and apples, start pizza sauce as I have enough tomatoes to finish that and what ever is left I can add garlic (the only difference between my pizza sauce and pasta sauce) and can more of that.

Back to work for me. Have a blessed day

Prayers for peace (and common sense would be nice also)