I haven't been to the store to buy any groceries.

I used a volunteer lettuce plant from 209 and lettuce from the neighbor to make Kevin Jacob's lettuce soup. I cut the recipe in half, served it hot the first night, Hubby said it tasted like green potato soup to him, and cold the next day.I could taste the lettuce better when cold but liked it both ways.

I fried a green tomato a friend gave me and potatoes and served applesauce for a light dinner.

Made potato presse (recipe from Home Chef that son2 got as he is using that service and LOVES it)  double the recipe son got (his service is for 2 even though he is single,uses the other serving for his lunch). I doubled it so I could have leftovers for Wed as we will be on the road between doctor appts and ordering the windmill for the pond. Son2 said it reheated nicely in microwave on 50% power for a minute or two.

I found a box of 30 dinner sausage patties that was froze solid together. So I cooked them ALL and then refroze the leftovers after dinner on a cookie sheet so I could bag them and then pull what I want for fast meals.

I have to make a grocery list tonight, basic produce is needed, chicken as Hubby wants some chicken salad, bread and milk, not sure what until I finish making the menu.

As for 209... we walked through on Sunday, crossing our T's and dotting our I's and found 2 switches and 6 outlets were not installed...Got a hold of the head contractor by email (he has his email on his phone) who forwarded to the sub contractor who admitted he just ripped his son's head(co owner of business) BECAUSE he was there on Friday and was suppose to check and make sure everything was correct. Son admitted he forgot to take the paperwork but did look around and noted 3 of the outlets weren't done.  HEAVENS.

They already got a guy there (not the son as he is now doing crap duty.instead of one of the employes SNICKERING..unplugging a customer's sewer line as they do electric/plumbing and HVAC) and the guy at 209 that is no longer on the crap duty job also noted to Hubby that he thought he could do all of it if Hubby could help him run the one line. We have no problem helping.

We cleared an area (again) for us to take stuff over that was packed...and the contractors took over it for their painting and building odds and ends. SIGH. Can't complain as they moved it to the barn so the ones sanding the floor wouldn't have to stop and wait on them. 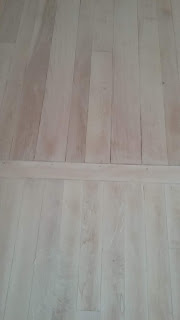 This is where the maple (came from our land)meets the pine.

Can't wait to find out what the two rooms over the front room are. I am willing to guess the hall and the bedroom are pine since the original owner, a young man of 18 when he built the house, put the kitchen in.  The front room was put in by an Amish owner. He cut down oak trees in the pasture and made the floor boards. 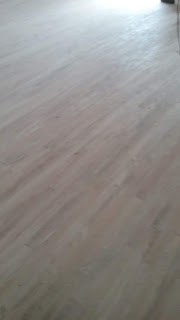 This is the wood that the north loft skylight is being boxed in with. 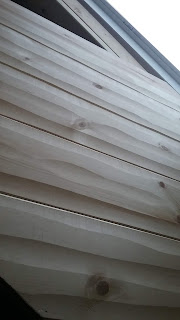 It will also be the bottom of walls in the south loft. 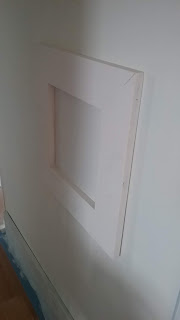 and finally.... so floors,ceilings and walls can dry... the AC is in and running when needed. 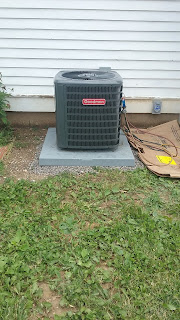 The contractors are turning it on when they leave and then off when they get in. They set it at 74 which is a good temp for paint and polyurethane .

We put a portable AC in the loft where the carpenter is working on the skylight as he needs it during the day. Said it was a good thing we did as he got stuck in the tresses while boxing in the skylight (he said his size 14 feet got caught) and one of the other contractors went to see what he was banging on so much. They got him out and then stayed with him while he finished that area (they joked he was building his own casket but they didn't think we wanted to pay for it for him.)He said it wasn't bad because he at least didn't get over heated and pass out or have heat stroke which can happen in those areas because we had turned the AC on the night before so it would be cool when he arrived in the morning and wouldn't have to wait for it to cool that area.

I started putting polyurethane on the bathroom doors and then had to take it off the first door and drag both doors in the house in the AC due to the wood had drew so much moisture from the air the polyurethane wasn't not drying at all. House stunk for a couple days until the humidity dropped enough I could get the house opened up and the first door back out the garage to get it finished. I will start the second door later this week as I see rain in the forecast tomorrow and it takes a good 3 days from start to finish on the doors of dry weather.

They keep telling us July 15th if everything dries and the kitchen counter gets in.