Filling the pantry for a year FRUGAL

Living around farmers you get to hear how the price of corn is down, how it's too wet for the beans to be harvests and the price of meat is going to go up.

We already have a good pantry but when the man who used to own this house offered us free tomatoes because they had fell off the vines (he called them seconds) and he doesn't sell them at the auction , we went to glean them... 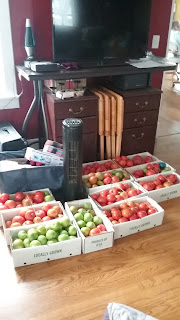 110 lbs of tomatoes with a possibility of more when he cleans his hot house if his helper doesn't take all of what is left.

Hubby on his tractor with the new tiller preparing the south garden (the one that will have seasonal plants) He already did the north garden which is perennials and the garlic. 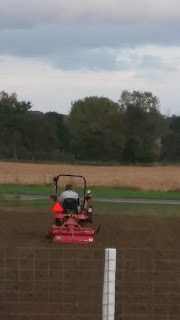 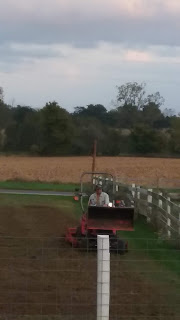 After we was done gleaning the tomatoes Hubby mentioned the freezers are pretty low on meat. I told him Kroger's had a sale of roasting chickens (7-8 lbs) for 69 cents a pound. Don't see it lower than that anywhere around here. So we decided to go to Kroger's before home.

We had decided the other week over our morning coffee to have 730 meals in the pantry. That is lunch and dinner for a year.

We save 1/3rd of what we bought... they had other meat on sale but it wasn't listed in the weekly ad. I now have an additional 75 meals of meat (not meat, I list things by how many meals it will make us to make sure we have enough food to go a solid year)

We got 10 dozen eggs (for less than $1/dozen) which is not counted in the meals as I will use part of them to make noodles,2 pork butts, 1 boneless rib roast (for Christmas as the price was cheaper than I have ever paid at Christmas) 2 racks of ribs (one for New Year's),3 roasting chickens, 2 pkgs of rib eye steaks (for when Hubby craves a steak after so many casseroles and soups)2 bags of frozen thin chicken breast, 2 pkgs of fresh chicken breast,3 pkgs of ground pork,12 lbs of ground beef, 2 pkgs of chicken thighs, and 2 pkgs of chicken wings (for when we miss our favorite wing place)  I cut the wings in 3 pieces and bagged the tips for broth. I broke the pkgs down to meal size and vacuumed them. What is already in the freezers is 4 prime rib roasts(from Christmas) a pork tenderloin, a pork loin, 10 meals of pork chops, 2 roasting chickens, 2 hams, 40 meals of pepperoni, 1 rack of ribs, 1 qrt of beef cubes for stew or noodles, a bottom round roast, 1 pkg of thin chicken breast, bacon, bulk sausage, and smoked sausage. Total meals in freezers are now at 117.

I have red lentils and green lentils

I have 28 varieties of pasta all bought on sale

We figured out after buying what is on this list we would be short 213 meals... that we decided to have them be vegetarian. So we listed 54 meals we enjoy that have no meat/beans(though might have scraps of what ever meat was leftover aka ham bone, or eggs) so we can rotate through those meals. Hubby doesn't care much for soup but I added 7 soups (ThePrudenthomemaker.com has several) so we can rotate through the soups 4 times in a year. He will do better not eating the same one a lot.

I baked 2 loaves of bread and froze one for when I don't have time to bake. Hubby didn't realize that baking bread takes about 4 hrs. Told me I needed to buy another bread pan so I could do 3 loaves at a time. Considering he already ate half the loaf I might agree with him though I know he won't eat the same bread all the time, something both of us don't care for. I baked Amish white bread this time. I plan to make oatmeal bread (Owlhaven.net) then a potato bread (simplyrecipes.com), and my favorite English muffin toasting bread (Kingarthurflour.com).

Back to canning tomatoes
Blessed Be