June 9th, frugal week with a refrigerator broke down 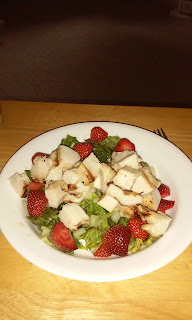 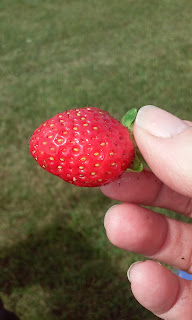 Strawberries are coming in about every 3 days, about 2 cups at a time. Nice amount for the two of us to eat up but not to put any in the freezer.

I had a shoe insole come loose, since I wear a size 3 it's hard to find replacement insoles, so I put the insole back in as best as I could and used a hair dryer to heat the insole up , hoping there is enough adhesive to warm up and attached the insole back in.

I sewed a button on Hubby's pants.

I run the dehydrator in the late evening so I don't heat up the house.

Our refrigerator went out and we lost over 2/3rd of the perishables (shredded cheese with poof up the bag when it's had too much heat) and  half of what was in the freezer by time we figured out it wasn't going to be fixed right away as the parts were hard to find and we got another (Thank you Rent a Center that allowed us to rent for 2 wks) frig to transfer to which was smaller, a lot smaller than we had.

Hard hit as I had to use June's grocery money to fix the frig (repair man warned us to save up because it's going to die probably within a year)and rent the other frig. I plan to limp us until July without robbing Peter to pay Paul.

Taking some advice from Brandi over at The Prudent Homemaker, I scrubbed out the frig while it was down while waiting for parts to come in . For what ever reason a nice clean frig even broke down made me feel better than one that was sitting there needing a wipe out and broke down.

I called a doctor's billing to find out what was going on, we haven't gotten the bill in 3 months and the office said it was still pending ins and ins said it's paid. Ins didn't pay all of it and the billing office was appealing the lack of payment instead of just charging us and then having us appeal it...NICE .

I also had to call another doctor to find out if my procedure was preapproved and the answer was NOT yet....sigh, the ins did say it's in the final round and the hold up is because the procedure is changed from what I've had done the last 4 yrs...last year I didn't have to have preapproval...change in all ins (not just mine) in this procedure.

Hope you all have a frugal week.
Posted by Chef Owings at 3:40 PM 1 comment: