We are both dragging butts. BUT we knew this week we would be under a heat warning so hauled butt last week through the weekend to get the outside work mostly done. We can work inside the house this week since we are moving furniture around due to wood stove coming in during August... figures crossed as you never know is something is going to come in when they say it will.

Hubby bartered the use of his small trailer for a cord of seasoned hard wood.

I only bought what was on my wish list (actually it's a need list but not immediate need) when it came on sale and I have points I could use.

I pulled the snow peas and garden peas that were dying. I have 4 more varieties of peas yet blooming.  I harvested strawberries... we might have one more round to pick it the bunny and birds haven't gotten to what few were left over Sunday. Lettuce leaves are daily now, a few radishes left and we have plenty of scallions. I don't have tomatoes but the Amish around the corner does so I will be pit stopping there to get some for this week. I have blooms but not tomatoes at this point.

I finished planting the summer crops and most likely will run myself over at harvest time. I do have 6 square pots I want to plant with "salad" stuff to try to keep it on the table through the heat of the summer. I just need to figure out where I am going to put it. I am watching the sun light in the area between the house and the deck ramp thinking it might be a good place.

I checked the IRAs, check where we were for saving for grid down stuff. Checked about replacing the garden boxes that are falling apart and got our propane contract early and was pleased to see it less than $3/ gallon. I decided on 1500 gallons for winter contract and will pay for a summer fill if we need it.

I am really trying to limit the propane use from the main tank by using the electric water kettle for hot water instead of running water until I get hot water. We don't pay for water as we have a well but we do pay the electric to run the pump to get the water. I was still able to drop the electric bill another $10. I think it's mostly that we are outside  so not running the ceiling fans. Curtains open in the evening so not turning on lights. I imagine it will go up when the AC is on this week with 110 heat index.

Then I had a sit down with Hubby over finances. I pointed out how much his IRA has lost (mine hasn't that much as I am more conservative than him) and that at this rate he would be through his IRA in a couple years (I had this talk before). I SHOWED him what we could do to not draw as much (like 1/3rd of what he is drawing now) and be okay.

No we would not pay extra on the mortgage for the remainder of this year or any next year.

No we would not be buying willy nilly. Like the whole house insect system he just wanted at $1500.

No that does not take in any income from his business or me earning it from the gardens or work. It's not something we can count on.

We would have to use the slab wood for making new garden beds or save it from extra income if it is there. We would be sifting a lot of dirt to reuse, I have some fertilizer that we can add to it to improve the soil. I am sure E would give us manure if needed.

BUT it would give time for his IRA to recover since he is changing how it's being invested this month. 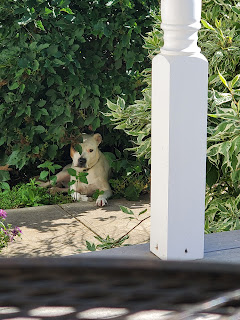 One way to stay out of the sun , is to lay under the lilac bush. 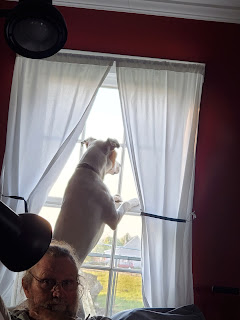 Spying on the Amish neighbor while he runs his saw mill just incase he has his dog Pepper with him that she hates. She is standing on the back of the old love seat that we call the dog seat as all the dogs used it to either sit on or sleep on. Hubby is sitting at his desk doing paperwork. 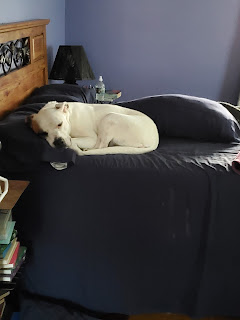 Sweet baby needs a nap and made herself a bed on my bed AFTER keeping me up half the night due to rain (not storms) coming in. I think if I had a cot and slept with her in the basement she would settle. Wilbur used to do that with her.