one handed frugal $20 grocery for Aug 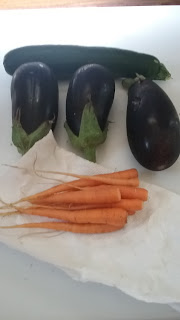 when you look forward to harvesting the gardens just to get out of the house that isn't concerning medical issues. I already found out walking outside in high humidity will help a sling rash under your arm to flare even bigger. Frugal side.I already bought stuff for it at the dollar store.I didn't buy all the gadgets that I was told I would need to survive with one hand for a month or so...maybe because we have several one handed family/ friends that get along with all that stuff? 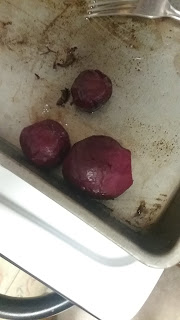 There was 6 beets that I roasted,then realized I was hungry so ate 3 of them before this picture. Since hubby doesn't care for beets it made him happy and neither of us had figure out what I could eat for lunch. 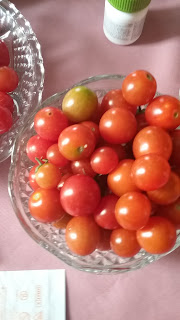 Cherry tomatoes are starting , several had busted due to downpours. 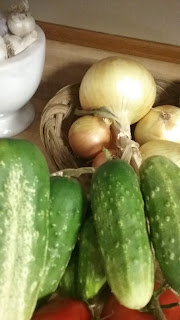 large onions aren't mine but the small ones along with the cucumbers are. I'm thinking refrigerator pickles might be the easiest for Hubby since I'm stocked for dill pickles but don't have any bread and butter pickles. 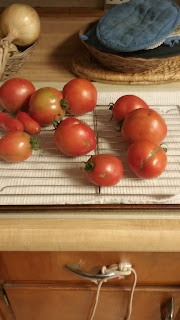 These tomatoes aren't very big,there are some that are size of baseballs or bigger that are still green in the gardens. I mentioned fried green tomatoes to Hubby and watched his eyes roll...rough when your wife is a chef and down to one hand LOL.


The now deceased mole destroyed my scarlet runner beans. I don't think they will recover in time to get beans off them.

We have August bills paid and the rent,electric and this coming winter's propane ( price right now is $1.29/gal and we use 900 gals to be paid in full at signing of contract this coming week) sitting in the savings until due.

The bad news is my car that I was going to sell to my youngest has a broken drive shaft. She's now looking for different car and I'm looking at a repair bill.It's still good enough for driving, just not the 2 1/2 hrs a day she does to work. Our mechanic, bless him and his, is willing to use used parts if they are good enough to put in his own cars and lets people make payments without holding the car until paid in full.

We know we have 4 outings that will cost us some money so I put that money back also added a bit more to it as we will be going to a friend's summer cookout and I'm not sure what I'll take.

Monty..the 27 cubic ft chest deep freezer (Montgomery Ward) is full to the point if you don't put things just so the top won't close. Mostly meat but the veggies have crept in.

Newbie the 21 cubic ft chest deep freezer (new freezer) is full of veggies, fruit and cooked meat.I could get some sliced cheese in there...maybe.

Baby the 7 cubic ft chest deep freezer(it's the littlest) that sits in the mudroom has some of everything but mainly it's breakfast or soup food. It holds this year's amount of corn as the one bin is the perfect size. I don't think a sheet of paper would fit. I really need to make chili but Hubby isn't thrilled with canning it.The meat for it is in Baby.

The kitchen frig is full,it's freezer has enough room left for 2 boxes of ice cream sandwiches,my ice packet for my shoulder and 2 ice pack refills for my shoulder.

The mudroom frig is seasonal fruit (local produce)and produce from the gardens.The freezer must be full as Hubby told me to NOT open it.That's usually the sign he put too much in it and it falls out when the door is opened. Since the door is held shut with tape, has been for years, it's hard to look and see with only one hand and not worth possible set back if I get hit with something.

The dry goods of the pantry are in good shape until Thanksgiving and will be wiped out by time Christmas/Yule is over with. I'll restock during the holiday sales.

The canned goods (home canned and store bought)...I would like more especially meat and fruit but right now I could easily stretch it for a year.Longer by eating the fresh as it is in season.

I'll restock pie filling,pumpkin,apples,winter squash,sweet potatoes in Sept.at the Amish produce auction and Hurley Farms. I also noted on my calendar to call the local produce farm that grows potatoes next month as they close the first week of Oct.

I'll restock ham,turkey and roasts this fall.Maybe pork loin as last year the prices were a bit too high.

We need personal items and some household items like water softener salt that costs $72 plus tax per fill but we will wait until there is a sale.I also want to add to the emergency  fund (and pay off car repairs). I figure $20 for the month of Aug for the day to day groceries.

We need to eat from the freezers so I have room for the fall meat.
Posted by Chef Owings at 3:02 PM No comments: