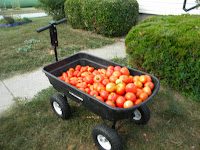 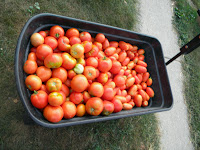 My son calls me almost daily on his drive to work to make sure I am doing okay. Then he calls me at lunch time and see how I feel and what I have been doing that day and what else will I be doing and then on his way home he calls to see how it went and what I fixed his dad and me for dinner..for the last couple months the answer has been .I am in the tomatoes and I am canning tomatoes in some form.Tomatoes has been on the table in some way pretty every night.

At the beginning of the season I had one of these every day or no later than a day and half. then it was every other day, then every third day. It's been 5 days since the last load. The weather has turned unusually cool for us and this time of year. The tomatoes aren't turning red as fast but I am still pretty well loaded with green tomatoes. Guess fried green tomatoes are going to start being on the table a lot also.

On Monday during my son's lunch call he was silent for a few minutes when I told him we had went to the produce auction and then stopped at a farmer's market on the way home. I could tell he hated to ask what we picked up but just couldn't help himself.Probably so he knows what to tell his sisters so they know what food they can ask for later.

The freezers are full. The pantry is almost out of shelf space. Will be long before I finish for this season. I have started dehydrating things I normally can such as pumpkin just to have room for other things.I got the chili soup made and canned but not the veggie beef soup.I haven't made my dried noodles either.That's also on the to do list.

We know if things turn bad like they did a couple years back , that the food I put up (ha ha old term ) is money in the bank for us and our adult kids . I am becoming my grandpa more and more each year.If he didn't grow it,hunt it, fish it,barter it or raise it , he didn't eat it. We don't hunt or fish (hubby drowns plastic worms) and I will buy meat and some other things but most in the pantry is home grown.

I need to go check the canner and the dehydrator.