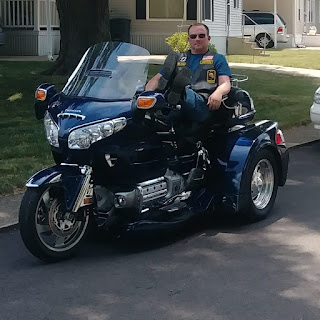 had a nice day and went for a ride with his combat vet buddies. He was nice enough to send a photo. BRAT.

Our local little store that also sells cooked lunch special is back open after a year. She's had it hard as she was also fighting cancer a second time. She had to increase her lunch prices. No one batted an eye over it and told Hubby when he stopped and got a snack for the road that she sold 50 dinners (totally out) of meatloaf and had to go take the sign down as the meals were all call ins for pick up. Said if she could have 3 months of selling 75 % of her lunches she would make a good dent on the loss she had. We will be trying to do at least once a week if not twice to help her.

We have a busy week ahead. Hubby is now answering calls with " hectic for the week". Seem like everyone was wanting him to driving them to Holmes co.

Monday we were supposed to be having taxes done. We got a call that the appt was canceled and it would be drop off only. So we are dropping them off on Tuesday and not making a special trip just to drop off.

SO instead of taxes on  Monday Hubby is calling to see if he can get in for his physical for the business. It's usually just walk in but they haven't always had someone in the office he goes into for it.

Tuesday we will drop off taxes and get our covid (Moderna) shots. First round. We have been checking and not seeing anything available near a hospital in case I have a reaction (has happened). I said something to my ortho doctor (which is not in my county) and he told me to watch the hospital scheduling he in with. I had checked yesterday morning... nothing open... checked yesterday afternoon and 4 appts were open. We grabbed 2.

Wed and Thurs. are full days for Hubby to haul. It's supposed to be decent temps so I figure to be in the gardens cleaning up from winter. Suppose to SNOW again following Monday.

Friday is still open. If he doesn't haul anything we might go get the supplies for the gardens.

He said except going to an auction or something he won't be doing much work with the business on Saturdays. I will not hold my breathe on that as he will get to thinking about the slow time through the summer and haul anyways.

I ordered 2 of this type of planters

through Brandy The Prudent Homemaker's Amazon link. I got one in lime green (or it looks that way) and one in purple for the deck. I also got 2 of 30 inch tall rectangle shaped black planters to put at the front steps of the porch. I need some roll saucers for some of the other pots to keep the deck from getting ruined.