When I loath cooking 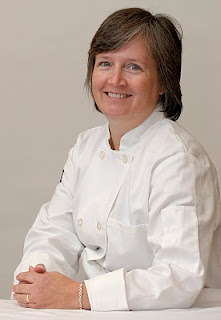 Yep, 2005 when I was in Philadelphia  for a convention and got a free photo of me in my chef jacket. Grew my hair back out to my waist as I got tired of fighting it to stay up inside my hat.

It sometimes surprises people when they mention I must love to cook everyday being a chef... as a self employed chef that answer depends... for work , love a good solid 5 days a week which usually ended up at least 10 plus hrs a day..at home, I am always looking for plan overs vs left overs and how to slap a good balanced meal on the table in 30 minutes or even better in the oven where I can do something else, like read a book and drink tea.I never have been much at crock pots  At work I love working with different ingredients (great in Atlanta GA) at home here in Ohio, not going to get that variety unless I travel 3 hrs one way to Jungle Jim's. though there are a few things I could order from Amazon if I really wanted to...I loath to order produce or fresh herbs online.

Right now, I am sitting here fighting bronchitis, as Hubby shared his (GRR) and for the first time in 25 yrs we are both sick at the same time and both are not really wanting to cook, let alone clean up.

Keeping with that theme HA HA...I fall back on old stand by's of when I was a widow with kids... Breads, pizza crusts etc were 98% of the time homemade.It wasn't that I did not want to spend time cooking , I was working 3 part time jobs and being single mom...not a lot of time or energy left.

Tuesday enchilada casserole (made either the night before or in the morning) with lettuce, tom and onion

Saturday mac and cheese with peas or peas and carrots mixed in with hot dogs.

Sunday Roasted turkey (yep all year around),sweet potatoes and green beans (next round of turkey would be white bean chili followed by shredded turkey sandwiches, might be a pot pie or blue plate special)

Friday Aunt Dolly's oven meal casserole (what ever was left from turkey, a layer of veggies topped with slice potatoes and what ever cream soup.

Monday blue plate special AKA sliced pork on stuffing with mashed potatoes drowned in gravy with green beans or corn and cole slaw.

Saturday. Breakfast for dinner... each kid took a turn  at choosing what would be served. Waffles, Belgian waffles, pancakes,French toast. sweet rolls, syrup or pie filling, bacon,sausage or ham, fried apples or cobbler, grits, cream of wheat or oatmeal.

Monday  Meatloaf, mashed potatoes and corn and green beans because there was NEVER leftover pasta LOL. (I will add here Daughter 2 makes meatloaf first and uses the leftovers either in spaghettie with meat sauce or in chili)

Saturday eggs , fried potatoes, biscuits and gravy(gravy was made from what ever fat I had saved and be milk gravy if I had extra milk, in good times it was sausage or bacon gravy)

Sunday Roasted chicken, baked potatoes and corn (followed by chicken dumplings and then chicken and noodles the next round)

Tuesday mac and cheese , peas or peas and carrots and smoked sausage

Saturday Appetizers...might be pigs in blanket, cheese and pepperoni and crackers, sweet and sour or bbq meatballs... Kids choice.

Tuesday...leftover soup has mixed veggies and rice(or small pasta)added to it and served over homemade bread.

Thursday chili with cornbread and salad

Saturday Cincy Chili (chili over spaghetti) and a salad

I used to rotate through these every 6 weeks with the change of what was served on Monday's. Sunday was when I had time and didn't mind as much the clean up as much so that's when the meal that took time was. I also baked bread on Mondays, Wednesday and Saturday...3 loaves every time.