On the not frugal side BUT

could go under the "grid gone down" budget since it is wind up.

When we had decided  to buy a house we decided to have rewards when the mortgage hit certain goals we would buy something that we wanted instead of needed.

First one was a restuarant that is expensive (we ate leftovers for 3 days from it).We usually go either for Hubby's bday or our anniversary one or the other not both.

Second one was buying Son2's used motorcycle and sold ours which actually paid for Sons'2 we bought as he only wanted what the pay off was and gave us a bike 10 yrs newer than we had. I guess we shouldn't have counted it as it was a break even purchase/sell LOL.

This is the third one. 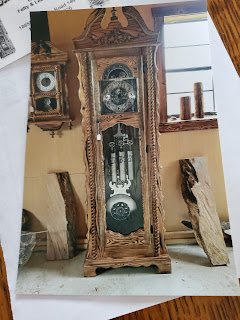 I've priced what we wanted (Hubby picky over the wood and I am over the chimes). The prices were running $5000 to $8000... way more than I was willing to pay at this time. Figured we would just get something else CHEAPER on the buy list.

Hubby found out a young Amish man "F" that just got married and moved closer to us this spring is building clocks so he stopped in thinking maybe a "mantel" clock even though we have no mantel. It's not quite like this one but this was the one he had a paper of. He wanted $2500. The chimes alone are $1000 as he shows the receipt he has so those ordering know he is not padding the bill and it will be exactly what we want, not settle for.  We will be moving furniture to put it in front room around and since we will build a closet in the wheel chair bathroom.

While there Hubby asked if he clear coated other furniture. He said yes. COOL. As the other Amish guy "H"  that just finished redoing Son2's cabinet that had fell apart needed to have a clear coat and the other Amish "N" that does spray clear coat is the one whose barn burnt so he is already WAY behind on his other work.

We went back to "H" and picked up cabinet. He mentions he had enough wood left over from repairing the cabinet that he could make a bread, onion, and potato bin and he was willing to do it for $20. He is putting a food grade sealer on it.