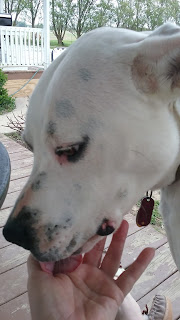 This is Charlotte. She will be 2 on June 17th. She is trying to get me to move out of my chair on the kitchen porch which she now has decided is HER chair. 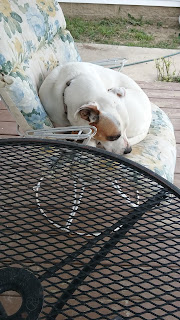 Then it was fine, I will go over here and sit in Daddy's chair and pout. 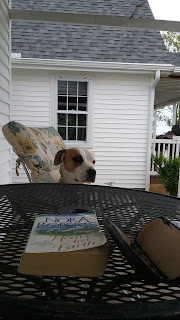 I shifted in the chair and she was looking to see if I was out of HER chair yet.

The temp is 60 and that is the warmest it is getting today as we to drop in temp all day until it's 45 tonight. Furnace is back on.

I have laundry rolling and I will clean out the frigs and some more of the pantry as trash goes to the road tonight.

I pinned a sheer curtain that will go on the French doors. I will have to sew them by hand as my sewing machine hates sheer fabric and I don't care to fight with it. I can do the hand sewing while watching cook shows on tv in the evening.I don't usually watch more than the news but Hubby started watching them and asked me to watch some with him. We get a kick out of Nick Stellino as he reminds me of my brother. British bake off is interesting also. Others he watches are Simply Ming, Martha Bakes, Patti's Table, Lydia's kitchen,and Rory O'Connell if he is on.

I really really just want to go  back to bed and lay there. Don't care if I sleep, just lay there. Depression and I are old friends, I think he is a cousin to Crohny (my Crohns).

Even with everything we did in the garden to help bring the soil back up, I don't think it was enough. Rain coming in every 2-3 days isn't helping. Neither will this cold snap.  In GOD's Hands is what I keep repeating to myself, I do the work, keep the faith and leave it in his hands.I only have half in which is a concern,I don't have the flowers planted at the windmill either. I told Hubby it was going in this week even if I have to mud it in. E and M don't have anything in and E said over half of their church (180 families) don't have anything in or what was in has flooded and rotted.

Deck isn't getting done due to the rain also. We did go out and mark the area. Which was good as after I mentioned we would be standing in front of the door trying to grill like we did on 245, Hubby moved the deck 2 feet so that wasn't going to be going on. It will allow us to change the down spout to drain farther away from the house also. E is going to put an awning on for me and he is doing it so when it rains I can still have the doors open if we ever get the deck on.

Can't get to the dog house, it's a muddy swamp where it is, chicken coop hasn't been moved for the same reason. Can't clear the garden shed until AFTER we take furniture to Son 2, Daughter 4 and maybe Daughter 2 as she is thinking of taking the last of the furniture as that's where the garden stuff goes. I have 4 boxes of Daddy's stuff left to go through.

Hubby's schedule and Son's 2 schedule has not worked out as Hubby wants to haul the furniture down and do the odd jobs at the same time. Daughters have kids in and out so someone is usually home so they don't care when we bring it down to them

Hubby trims the day after rain and tries to mow the entire area the following day.

Last week he got slammed with work even with having one person cancel 2 jobs...actually turned out better as he picked up 4 jobs for the same time and now has plenty of money for his fishing trip. He said his goal is to have one of the 3 trailers "paid off" meaning the money is back in the investment accts. He also was able to give me money to give to our grandson that is graduating. BUT because he was "working", he wasn't able to do all he wanted after yard work and garden work..

I look at all that is NOT done and don't see what is done....

I don't see that I cleared the southeast corner of the front room and moved the radio Son 2 got us for Christmas into the dining room where we will actually listen to the local news in the mornings while having coffee like we did growing up. Which now allows me to bring in another small table to sit my computer at and take it off the bfast bar in the kitchen. I can then use that section for canning supplies when I am canning. Hubby said I need to paint the table before bringing it in.

I don't see that I moved all the grow light cart plants out to harden off. Have 2 that is going to end up in pots as they aren't doing well out in the wind and sun. I want to declutter a basement area , (the last area in the basement to declutter) and move the  grow cart there for next winter.

I don't see that the pile that is commonly at the basement door is not there.

I don't see that I have my sewing area set up except for the sewing table that Hubby found me last night. Wednesday and Thursday are suppose to be rainy days so that's a good time to be sewing. SO he is planning to have the sewing table put together by tomorrow.

Son 2 called last night to let me know he would be bringing friends up to see us probably this coming weekend... figured I would like a week's notice as he already knows the house isn't company ready. I do like to dust and clean the floors of fur before I have company. THEN he mentioned us feeding them and he would pay for the groceries...  deep breath... okay.I will watch the weather after Thursday and see if we will grill out or cook inside before making the decision of what to get.

Washer buzzing, next load to the line.
Posted by Chef Owings at 9:57 AM 5 comments: