on my basement door... 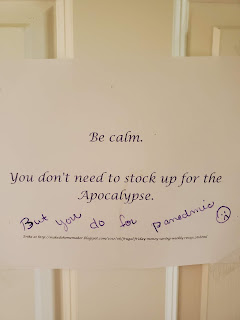 looking to the future and why I garden like I do

When this started I had several people ask me how long I thought it would go on... my answer, 2 years... why did I answer that way?... because Covid 19 (true name of this crap) mimics the Spanish pandemic (which did not start in Spain... https://en.wikipedia.org/wiki/Spanish_flu). I also knew that jobs lost causes recession... big enough one that last long time  and we will have another Depression. Weather gets nuts on us and flooding or drought can make things worse.

SO I am preparing (as I was raised to) to do what ever it takes to make it through these times....

When we decided to retire and move,we made up our minds to be as self sufficient as possible. When we bought this house with no heat, running water , and an outhouse (it was Amish) we knew the first year we would be working on the inside of the house to handle me (or Hubby) but mostly me as I know I will be in a wheelchair some day as my spine will give(it's twisted like a cork screw). We still need closets and one room needs finished. Supplies are here to finish it. I sometimes wonder if we should have had 2 furnaces until I remember the propane bill.

We also knew we would be adding fruit trees and maple trees (neighbor taps for sap to make maple syrup) and a garden that we knew where the veggies and fruit came from and what was used on them.

Last year there was 1,041 recalls on food and drink.... 1,041 times what you ate, what you fed your families could have caused you to be sick, even die. With my Crohn's already causing problems I don't need the extra sickness and I definitely don't need the worry that comes with those recalls.

I was asked on my last post if I knew what it costs me for dirt, seeds, plants etc... YES, right down to the last dime. This year will be high.... fruit trees, berry bushes, dirt, building material for the sq ft gardens will increase that. and was put in the budget when we bought the house.But next year it won't be like that.... I will add fertilizer just like I would every year, etc... that will put the cost down to where organic fruits and veggies is in the stores. I also buy veggies and fruits I don't grow (and won't ) from the Amish. They pay property taxes just like the rest of us.

SO starting with the the gardens... yes, I will be putting up at over a thousand canning jars of food. I will take care of us, and most likely at least 3 of my kids... if not 4. The other 2 either have a garden or are in an area they can get garden goods.Those 3 rent and have either no place to put even a pot or not allowed according to their lease. If the season it good I will be more than that. I already know that the season will on average have 2 to 3 back to back below average harvests. Then we get 1-2 above and then it slides back down. I would rather have too much than not enough. I swear M got gray hair when she started running low and it wasn't fit to grow anything. Her brother has a greenhouse and grew some salad stuff for her. I gave her 2 cases of tomato juice (seemed right since E's brother gave me the tomatoes) and 2 cased of green beans.  We got pork loin when she sent the jars back.

My Amish neighbors (on each side) has offered to supply meat .They also told me of the butcher shop that buys the animals from the Amish to butcher. I can barter or pay for what I get. They know where their meat comes from and how it's raise... mostly grass fed during the summer and corn they grew them selves in the winter.

I have my buy list that I usually pick up from the store. I am going to learn to make more of it myself aka sour cream to start. Wait...it might be an almond chocolate bar. I am craving chocolate.

The business right now can carry it's self 3 months. For the 1st year of starting a business, that is unusual. So Hubby isn't looking for work to pay this week's bills but bills 3 months from now.

Land and Garden budget is funded( from when we bought the house) I am spending it now instead of later. I am getting some great deals with how I am buying things right now. I am growing my own paste tomato plants which I will harvest the seed from when the tomatoes ripen. Will bring it down pretty low with the four projects we are doing this summer.

We are putting up a green house next to the barn. We were going to put up something like this 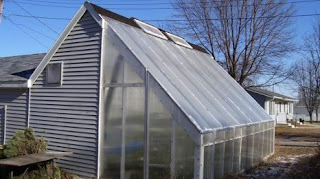 THEN Hubby found he could put a greenhouse plastic on the old garage frame that we had over the basement ramp. SO we will only need to buy greenhouse plastic and he knows the Amish guy that sells it. IT's still going at the barn so the north side of it will not be hit by the colder weather.

I looked at where I can cut the household budget

I will drop the full coverage on my car to what we have on the dog truck we just bought.

We can just order enough propane to get us 2 additional tanks as we should have at least 1 tank left at that time. We use 3 1/2 tanks a year so if I just need to watch how I use my gas cook stove. Use the turkey fryers to do the water bath canning instead of the cooks stove. Multi dishes in the oven or use the air fryer (which is really nice in the summer as I sit it outside so it doesn't heat up the house..

We can change going to the chiro (when the stay at home goes away) every 3 wks instead of 2 or me go alone if Hubby is working.

We cut the grocery budget to $75, we was going to do $50 but I will need pickling salt , vinegar and spices for canning. I won't buy ice, there is room in the barn freezer with E's ice to put ice I make myself for blanching.

Our OTC and meds has dropped due to me coming off 3 meds, dropping to half.

We dropped the household maintenance to half. I have what we need for 6 more months I can buy them on sale instead of "OH we need to change this"

We are not saving for next year's bdays  or Christmas. We have 2 graduating next year (We have 2 this year also) so I will save for that. IF we have money at Christmas they will get that or baked goods. I think they would like baked goods more this year since it has been mentioned. Bdays will be decided later.

Non food... I hope we have enough tp to last until fall. Geeze. Son 2 who never has stocked more to than what he uses in a pay period since it's just him, bought a 24 pack just because he is closer to his 2 sisters than we are and they might need a couple rolls. Other wise he has enough for 4 months. I have 4 months supply of cleaning products and personal products. I have bar soap when the liquid soap runs out.

We have no eat out money, no spending money and no clothing money. I do have money put back for Hubby to get new boots. He no longer needs steel toes and would like the next pair to not have that. That will probably happen when the stay at home goes off and he can go to the store in Sidney that carrys his style of boot.

Eighteen months of this roller coaster can be smoothed out by you in your home.

Think of this
It was during this time that Calvin Coolidge was quoted as saying “Eat it up, Wear it out, Make it do, or Do without” (Later, the phrase became more popular with, “Use it up.”)

I spotted old sq ft boxes behind the garden shed that we could use in the north garden.

Hubby pulled them out and fixed what needed to be fixed (I get to remove the string as I will be using them for strawberries and onions. 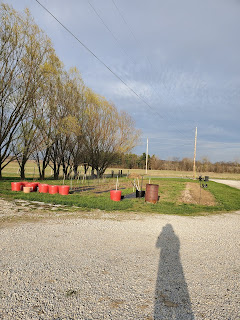 This is from the house, 4 of the red pots has blueberry bushes, one doesn't look like it's going to make it

The red pot towards the burn barrel has flowers in it. I have a couple smaller pots over by the blueberries that have a maple tree started from seed from the old farm. The tree had been started by landlords grandfather and given as a gift as a young tree when landlords Dad started building the house. The tree had been hit by lighting and they knew it was going to come down so I started seeds from it. I kept one for myself and gave him 6 when they got about a foot tall. I also have a lilac bush that was started for me. 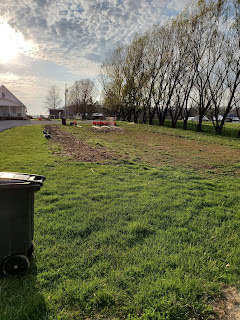 This is that garden from the road . The patch on the left side is the asparagus... about 80 ft long and 5 ft wide. Thankful it's not over flowing at this point. We have 3 people that are wanting to take crowns next spring.If it does any better than last year they will find asparagus on their doorsteps instead of the zucchini LOL.

Hubby pulled out the boxes to the north garden. We walked what I thought I wanted then I changed it as soon as I mentions I was putting trellis on the strawberries this year to grow peas and beans... had to move the boxes as I didn't want to shade the rhubarb that grows the length of the garden... 18 patches. Good thing we like it. 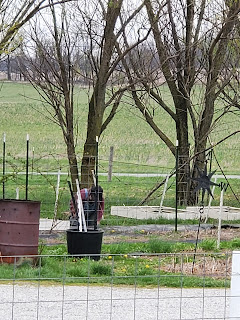 He hates getting his picture taking LOL. The stakes are holding the trellis to the blackberries.. He is putting weed barrier down for the sq fts that bunts up against the barrier that is there for the berries. NO TRIMMING this way between the boxes or between the boxes and berries. 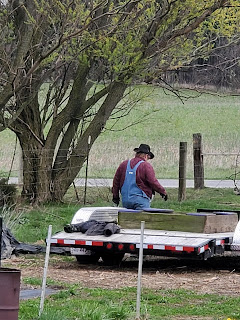 This is the sand box we had for Pat when he lived with us for a year while his mom (Daughter 4) went through recovery (clean and sober almost 6 yrs and got her Lupus and bipolar under control). This box will be for the strawberries that are already here... about 10 plants. They are in the grass so I want to move them.

The nectarine, peach, and apricot trees are in. Too bad of weather to plant right now so they are protected on the front porch. Hubby priced stone to put in the bottom of the pots.Planting them in pots for 1-2 yrs until we know for sure where we want them. Local place wants $15 for what would be each pot...Menard's is $3 for the same stone per pot. SO Hubby is going to Menard's. Not today as the high winds would make it hard to drive in. He wished he had already ordered the gravel for the driveway.

Since he is going to Menards, I asked him for a list for all the projects we decided to do. A trip to Menards wipes at the morning or afternoon. If we go ahead and get the stuff(money already set aside) then it's here, no running back and forth, no waiting until we are in that area anyways. Saves gas and time.