In the kitchen. Mirepoix etc WARNING FRIG TOOK A CRAP 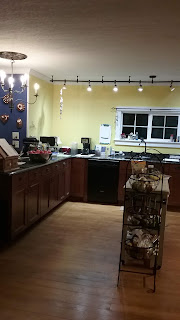 I enjoy the way my kitchen is laid out. It works well unless we both are at the coffee pots which both are at the corner where the silverware drawer is also. Since Hubby goes to that drawer automatically for silverware I put it there even though I wanted it at the end closer to the table. He usually sets the table so I let it be his choice.

We are having more waste then either of us like. Not that any waste is okay but things are getting shoved to the back of the kitchen frig and not being used. I do pretty decent with the basement frig .Hubby admitted he asked me where something was the other night and I told him where I put it but since he couldn't find it he didn't use  it up and I found it yesterday and it's not good.

SO today is change the kitchen (and my cooking practices) to not waste, be able to find what we are looking for without digging through the frig and have my different mirepoix where I can use it. To get back to cooking healthy flavorful foods.

Okay... let's start with yes I am a chef, a personal/private chef. I do have some culinary education/training not cordon bleu.

I am going through both frigs today. Combining condiments, tossing what isn't being used and organizing things. I will be grouping things together that are used together. AND finding room for my Mirepoix

I was raised by parents that grew up during the Great Depression with a great grandmother that was Cherokee, the other Amish and my Nonna (great uncle's mother in law that adopted me)was from Northern Italy. Between them and my culinary classes I use a lot of different mirepoix ...

Mirepoix is what you start the dish you are making with and it doesn't matter what the dish is.

Spanish call it sofrito also but use olive oil to cook the onion, garlic, bell peppers and tomatoes

Suppengrun is Germany... my granddaughter speaks German fluently and her uncle on her Dad's side lives in Switzerland so she passed this to me as it's carrots,celeriac and leek

Nonna from Northern Italy (at base of Alps is all she would ever say) always started EVERYTHING with a battuto ... onions, carrots, celery,rosemary, garlic, thyme, parsley and a little of bacon or Canadian bacon to replace the pancetta, prosciutto or speck she used when in Italy. When this blend is COOKED it's called soffrito.  Really it didn't matter what she was cooking... eggs, it's in there, fried potatoes, it was in there. When she fried chicken she would brown it in the skillet then put it in the oven, add the battuto to the skillet and make sauce/gravy of what was there.

SO I want in containers prepped onions, bell peppers, celery, and carrots  I will also prep mushrooms and black olives, I often toss in also,  so I can grab and toss in the pan. I figure prepping twice a week as I don't want anything to go bad.

I organized the cheese drawer. Hubby is bad about using something up and not mentioning it's needed and also opening more than one of the same thing.SO I keep extra cheese in the freezer.

The kitchen frig is good now so I can prep mirepoix.

The basement frig is making noises again... so it needs dealt with..of course Hubby isn't home so appliances act up. Tuesday it was my coffee pot. Wednesday was my Toshiba laptop and the plug to my Kindle.

OH CRAP..... basement frig took a crap... yes I know it's 10 yrs old, Yes I know we have had it worked on repeatedly to the point the repairman (a friend of my kids) actually showed me how to get it running again and again and again. It's the bigger of the two frigs and really nice for holding produce from the garden while I can or sale items. Condiments, extra dairy so I am not running to the store every week... We went without a second frig for about a year a couple years ago... that was a big pain as I ended up using a cooler and ice a lot during the garden season and then apples in the fall.

Thankfully the freezer in the barn only had ice in it so all the frozen stuff that was still frozen solid is there. I have the dairy and the fruit I just bought in the kitchen frig now. I still have condiments, cabbage etc that is okay and in a cooler with ice.

I lost the produce SIGH... I unplugged the frig, let it set over night and we'll see if it will start working again (have done this more than once) but now is the time to get a new frig to replace this. Hubby said when he got home we would check out what I was wanting and see about getting it.

We both want French doors, freezer on bottom. At least 26 cu ft. Which is part of the problem with the one we have in the kitchen is it is too small.  You would think after all these years we would know better than to buy a smaller frig.Son 2 is still reminding me of what I told him when he bought his, better to have a little bigger than a too small frig.

Son 2 did some research at his go to review sites while I checked mine.  I am leaning heavy towards LG LFXS38968D (black stainless steel) 27.9 cu ft... for the kitchen and moving the kitchen frig to the basement. I think Hubby will like it as he gets a bit tired bending over to get ice and this one has it on the door

Frig working... but I don't trust it, so what goes in it is condiments etc. NO produce or dairy. I am glad it's working. I hope it holds until we get a new one.

Got to go clean the home, Hubby on his way.... 13 hrs before he will be here... the first 4 hrs he is the passenger so he is cat napping.