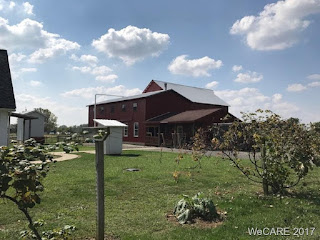 We close Friday at 2 pm and leave with keys in hand.

We paid for the house ins a year in advance , pretty big bite but we were expecting it as our ins agent warned us before we made an offer on the house.We have a vacant policy to be in place until we get moved in which is also expensive but covers things just encase the worse happens.

We will make a stop to check on everything but the main thought is to figure out how to fence the dogs in so they can get out but can get in the barn and not get loose until we get the major fencing around for their area because we want to take them with us when we work on the house .They can't be in the house with contruction crew etc. Plus we need to decide what is going to be their area. I want the gardens blocked off from them as Wilbur is well known for using garden plants to hide his business in.Not the type of manure I want in my gardens. 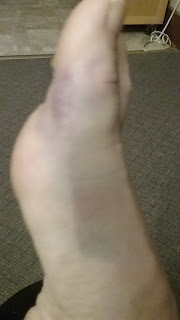 I fell coming up the outside steps to the back door and I broke my big toe in 2 places...the base is where I had a stress fracture 2 yrs ago... LUCKY it was Sunday the day AFTER we did the massive move for Daughter2 and maybe if I stay off it a bit it will be healed enough when we start working hard on the house 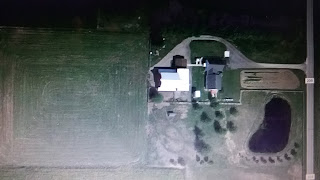 This is our land. YES it looks like big foot has stepped there.It's the pond(fenced according to insurance) with everygreens planted around it. The back 3 acres is still unknown about what we are going to do with it. It's planted in hay. Hubby is going to ask the Amish gentleman that is selling us the house if he would like to harvest the hay in exchange for mowing if for us this year since we aren't doing anything with it and don't want to have to start mowing it to keep the weeds down.The barn looks to have a white roof. We think there is part of a fence south (bottom of picture is south. Driveway is north, barn west and pond east) of the barn that we could finish off that would let the dogs run but let me use that area for gardens outside that fence ... and then when we move in just connect the fence to the fence that runs to the side of the house.The thoughts right now is letting the dogs out the back door or patio doors and keeping them south of the driveway and only in the back and not in front so when someone is coming up the driveway  to deliver something I don't have to hurry to haul them in or have someone worry about Rascal clawing up their car like we do here.

I plan to read OLD WORLD FARM GARDENS Raised Row gardening (Jim and Mary Competti) book that I bought and is on my kindle on how they did their gardens without using a tiller. Something to do to keep me off my foot?

I measured the cabinet area of the china hutch I bought last year and need to refinish and fix. I have a 2 tier organizer for my plates now and want to continue to use it. I found I can use a 2 tier on the bottom and 1 tier on the top of each of the cabinets of the top part of the hutch. My silverware drawer is built in here so I also  measured what I needed to replace for the silverware. I ordered what I needed from Amazon using the last of my swagbuckes and Pinecone research gift cards. NO out of pocket

The Hoosier cabinet I will have to refinish will have my mixing bowls and the baking pans I use the most.

I know there will be areas I will need to figure something out... I know I am going to have to find a cabinet for my spices and herbs.Those might be stored in the mudroom in a cabinet there when I find one.I do have a shelving unit Hubby built that could be enclosed (I keep my spices and herbs in the dark) with little or no cost. I need a place to my oils and vinegars and I plan to make a shelf out of the porcelian table top I got when I bought the Hoosier.

We went back through the to do list of extra projects and decided what needed to be done BEFORE we move and what we actually could do later or even next year. SO we are on the same page. I have a lot of furniture needing refinished, fixed, what ever LOL , that is going into this house so it's a priority that I need to list and then start on what is the most needed...like china hutch and Hoosier.

Daughter2 gave us some twin beds for the loft bedrooms, one of them needs fixed and it's a simple fix plus matresses . She thought I might want a place to take a nap while working .

Back to propping the foot up

moving day for daughter SORT OF 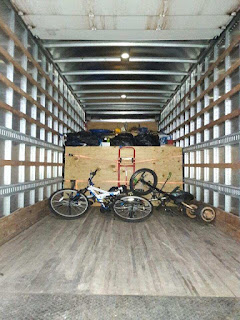 The sort of is the person that lived there more like stored stuff in the rental but lived elsewhere did NOT have the water on so instead of reading a meter and transferring water to Daughter2, they have to come out and turn it on at the street  and read the meter and make sure the meter is working etc which is a different dept.So she won't have water until Monday or Tuesday (WHICH IS NOW WED and there is still NO water) which means she can't stay there without working bathroom though thankfully there is a gas station within 3 blocks of her we used while moving her stuff.

But it ended up a dump and go type of move as she really couldn't put anything away before it was cleaned and couldn't clean until the water is on... BUT the weather was going to turn nasty this week so it's was do it now. Now her OCD and depression are running full force, we all just keep reminding her to think about WHAT is done and not what is left to do. As of today Hubby was helping her remove appliances (Daughter4 taking) and a cabinet (us to convert to "closet') and the trash to the garage where landlord is going to have it hauled away next week... she's okay with where the stuff is as long as she gets the water on by tomorrow.

This is 1/3rd of the 26 ft truck we rented which thankfully had a lift so we aren't hauling stuff up a ramp. This is also 7 hours of us ...Hubby and me, loading her stuff that was here. She still have the stuff in her bedroom but if she is sleeping here there is no point moving it yet.  Hubby picked up all her stuff in the 10X20 ft storage unit and part of the stuff at Daughter4s before he ran out of room. I went in the pick up and got the vacuum Son2 was holding for her and the rest of the stuff from Daughter4s. Bad enough dealing with a 12 inch curb and stairs EVERY WHERE in the house.


What have we learned so far...to keep in our minds when we go to move.

A dump and go only works if you are really super organized like Daughter 3 (4 kids also) Daugher 4 (3 kids) and Son2 (single, no kids, his computer crap makes up for at least 1 kid LOL)

Make sure the 2 wheel cart is in good shape. Last move of Daughter2 in downpours and tornados around us the old cart broke. I had my small folding one that wasn't the best but we were down to boxes so it worked out okay.New cart was a blessing.

DO NOT count on anyone to show up and help. 4 friends didn't show up, two of her sons had other things to do and had to leave after a couple hours and then SHE had to leave to go get one of the sons because her ex's wife got sick (flu) and was in the ER. END up just Hubby and one grandson and myself for the last 3 hrs...he asked how we could do it as he was struggling to keep up...mentioned something about us pushing 50 and then we let him know we are pushing 60. He almost fell .. except he was already sitting on the floor exhausted.

Trash bags are great for blankets, bedding, pillows as you can fill in the empty places with them. BUT paper grocery sacks and trash bags for breakables NOT good.I ask who packed it and my darling Daughter2 admitted she did and which I made it clear she was NOT packing anything of mine except CLOTH items. HEAVENS.

MEDIUM cardboard boxes. Large ones weigh too much if you fill them up (unless with soft light stuff) and are bulky to lift even with light stuff and your entire body will let you know it the next day.

You don't don't need every single keepsake your four kids have had since birth.You also don't need to find what you gave them when they moved out back in your storage area buried under your own stuff which I shoved right back into her home because I found it before I left to go to her house.She hasn't spoke to me in two days even though she is still living here which is actually Sleeping here.At least we are not fighting which was her teenage mode so she has matured ?? LOL

You don't need 20 pairs of pants (actually there was 50)and 50 shirts (100) when you wash every day and basically wear the same clothes during a 2 week period. NOR do you need 60 pairs of shoes,especially the ones that are missing it's mate...all of this was just ONE SON.Grandson not really happy with his Nonna (ME) at the moment but he did love it that he could find his favorite clothes right off the bat when he was looking for them. AND I put his dress clothes on hangers and hung them up and the rest that he does not even wear was left in the bags for yardsale this summer by his Momma. AND she told me she buried them under other sacks for the garage sale as he is not one to go dig for ANYTHING ... LOL

LABEL LABEL LABEL... I even have color coded the labels. Unless I flip the purple color for the dining room and blue for the bedroom the colors match the rooms, you will be able to look at top or sides of boxes and know which room it goes to.She had nothing labeled where the boys did label all of the boxes they packed for their rooms. Guess whose stuff is already put away and who is digging through the rest.

PUT THE CELL PHONE AWAY. Check it on breaks, not everyone should take a break at the same time unless it was meal time. Breaks are less than 15 min not 30 when you get sucked into Facebook, snapchap etc

Have food and drink... lots of water Daughter2 did get a lot of pizza (had coupons and lunch time special combo) had 2 slices left but I didn't eat at all and some chips for the kids but didn't have enough drink. Grandson grabbed more when he went to gas station to potty and we even ran out of the water again. It was in the low 50s so it's wasn't really hot.