Tuesday, I put the last of the green tomatoes in the freezer. Cleaned the pantry and moved some things around so it makes better sense... also will allow me to focus on what needs used up first and what we are low on. I had 10 jars of green beans. Forgot we lost 16 jars to bad lids, daughter 4 still has some of her's here and offered for us to keep them and use them as she has enough to go a few months. Her pantry is only 6 months. I caught the laundry up as I usually do that on Mondays and we went to visit parents instead. All loads were on the clothes line to dry even though they forecasted a freeze this morning we got nothings. I took leftover beef roast and broth and mixed it with leftover chicken and noodles my cousin made that I had shoved in the freezer and had plenty for dinner and enough for my lunch tomorrow.

Wednesday
Hubby is working today for a neighbor. He packed his lunch and we both mentioned at the same time it was weird for him to pack a cold lunch instead of leftovers that could be reheated. He was working outside with no place to to warm anything. He did take a thermos of hot coffee as he does drink it black. Said it wasn't bad even with the winds though the temp never got above 55.
I ate the leftover noodles for my lunch and spent the day washing the fall bedding and blankets . All loads were dried on the line except the last , it's a heavy blanket but is still damp. I'm okay with the dryer running for one load as I turned off the furnace when I started the laundry since I have realized every time I open the kitchen door the furnace was kicking on. House never dropped below 64 but it will warm up quick enough between the dryer, furnace back and the oven when I bake biscuits after Hubby comes in from mowing the pasture and around the pond that he plans to finish tomorrow. I pulled pork chops (cut from the pork loin I bought at the beginning of the month) to go with pears (on sale with coupon). I will also make a salad with a pear and walnuts (from freezer that was a gift from a friend) and sweet potato (gift from neighbor for going after kerosene for them) to go with the biscuits. I have homemade strawberry pie filling (neighbor again) to go with vanilla ice cream if we decided we want a sweet.

AND THEN IT WAS A SLIDE DOWN HILL 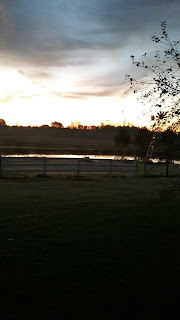 we got the frost THURSDAY  morning so Hubby didn't want to cut anymore around pond , wasn't sure what was weeds and what was flowers since the frost killed the blooms.

I went to make waffles with the new waffle maker and it just kept ripping it apart(on line reviews say use thick batter with 2 eggs so I'll try that the next time.) I didn't want to waste the batter so I made funnel cakes 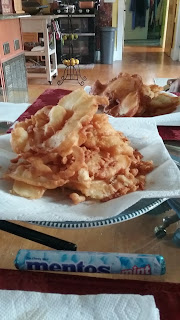 Friday we decided to hit the produce auction as I was still looking for onions,potatoes and sweet potatoes... 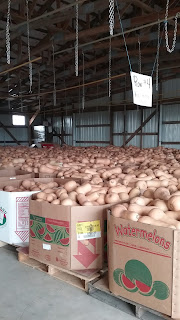 Wasn't advertised as butternut squash auction but that was pretty much all there was. I got some onions, a pie, candy for Hubby, maple syrup and a angel food cake in the area off the auction. SO since we didn't stay for the actual auction we went to Wapakonta to Walters Meats and SCORED. They had my sausages I had on my list, plus we got, hamburger patties, pizza burger patties, cube steak (for less than $3/lb) minute steak, round steak (that isn't paper thin), 10 lbs of hamburger, potato hash brown patties ,shoe string French fries and candy for Hubby. Adding 49 meals to the freezers. Cost is about $2 each meal.

We get the turkeys and hams in Nov and will have a total of 369 meals plus in the pantry. Then it's just milk etc to be bought during the year. 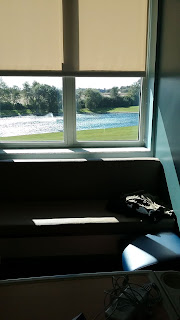 At least I can see the hospital pond out my window and Hubby is home (not visiting me ) with his crud. We now have some more answers of why I keep getting blockage. I have scar tissue from my appendix exploding and it stops my intestines from working correctly.

We will see when I get to go home... but at least Hubby is home with the babies 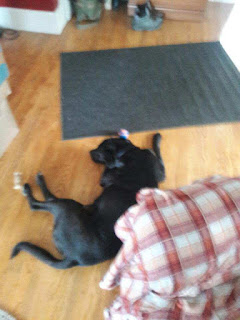 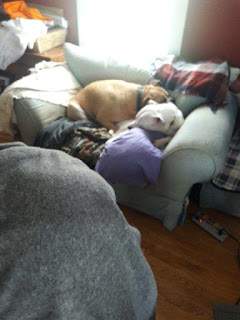 Rascal is pretty much laying at Hubby's feet most of the time and Wilbur and Charlotte are sharing the love seat behind Hubby. Usually Charlotte is laying on Wilbur