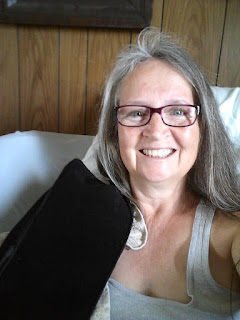 the black thing is the ice pack the hospital provided.It's almost as awkward as the cradle sling

It wasn't the nightmare others told. Maybe because I was in better shape, wringer washer, clothesline and 1200 sq ft of gardens is a lot of exercise.OR maybe it's because I actually did the exercises they told me to do after the surgery until I got into the physical therapy. Still looking at 11 more weeks unless the doctor changes the orders when I see him the 10th. I have a love hate relationship with the cradle sling.It's too big to fit me correctly and causes some raw spots from rubbing along with pinching nerves in my back shoulder area.

Due to the mess up of my therapy not being ordered until after surgery,my twice a week is scattered instead of the same days each week.Also the time is bounced around so a couple are in the afternoon when Hubby sleeps. A couple of friends had offered to transport me but can't due to other conflicting things.. So the doctor cleared me to drive myself. Still because of the bouncing of days and times we will be spending more on gas than I would like as there isn't anything else going on to combine with..

I would say the lack of decent sleep by having to have the cradle to my side is the biggest issue.The rash that started under my arm I was warned about was pretty much stopped because I had the meds here at 2 am when I woke with it and didn't have to wait until the local store opened at 9 am.I can do more than I thought, just slower and not some things like eat jello without issues.

My physical therapy is stretches right now as they didn't think I would be in as good as shape as what I am. My baseline testing put me closer to the beginning of 3rd week instead of the end of 1st week . I am hoping that advancement continues and I get out of cradle sling sooner.

Blessed BE
Posted by Chef Owings at 7:18 PM No comments: