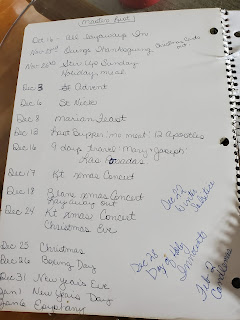 I was going through a lot of papers that I kept in the Christmas notebook This is from 1995 .. Kt (daughter 2) was in 10th and Blane (son 2) was in 7th.  Blane called it hoarding and Kt thought it was funny I would have something over 25 yrs like that. Hubby asked why I had it all listed. Because there was more than one faith in our family and I listed them all.

You know how some families point and say I am the same faith as my great grand parents.. Not my family. I am not sure if ANYONE was the same faith while living in the same house.

Daughter 4, Son 2 and I have been struggling with menu... so Daughter 4's daughter is now in charge of sharing HER menu.

We had 123 pasta Saturday with cheddar biscuits

She usually does menus on Wed. Last week she had goulash, Son 2 thought it sounded good but definitely made too much as he ate it 4 meals in a row. Had no freezer room as he had just bought a couple roasts LOL. I have been pulling from the freezers and pantry. Daughter 4 doesn't go to the store until she get the "menu".

My to do list is down to 25, I have 7 phone calls to make tomorrow, (hubby has one and has to go make the truck payment) and counted a 10 different veggies and a fruit that need processed in the next week. It was up to 32 but I did some things that were on the internet to get it down. Today, I planted over 100 bulbs of flowers part of them were in real bad shape but they were free so I planted that was on the list for a couple weeks from now. We'll see how it goes if they grow or not. Total now is 42 divided by 11 days left to get it done is 3.8 a day. I get the phone calls done and I will have done 2 days LOL. There is one day of appts so I won't get anything done on that day.

We needed humidifier filters (2 per humidifier) I found them on sale so ordered enough to get through this heating season.

While looking for that I found adjustable window screens. Hubby had priced new screens made for our windows at $65 each. We need 9. we decided to get the old fashion ones that we will be sticking in the windows until we replace the windows. I got found them for $12 with a $3 off each code. Then got another $3 off total order and 5% cash  back on my credit card. Well worth looking for something else since we plan to replace these windows in 5 yrs.

E let us know last night that his daughter's appendix burst when they started surgery BUT since she was already in to the surgery it wasn't bad.  We checked on the older kids that was home and the eldest let us know they had an older cousin staying with them to help with chores. They spent today at the cousin's family (E's oldest brother).  Hubby just left to go get E and M and child from hospital. I sent 2 pillows, a light blanket (she had no coat when she went) and a small trash can just in case. Hubby took water bottles for every one. Hubby went and told E's family , his family was going to send a message to M's side through a Mennonite. I hope the families go help E and M to play catch up on chores and getting ready for winter.

Hubby installed a solar charger for the electric fence we have between us and the pond. One of E's horses likes to lean over the wire fence and play nip on Charlotte. Only took one zap (both got zapped and she raised up to touch the fence in same area) and both now stay off the fence but it's not costing us anything. They still race each other down the fence line. Pretty much a tie according to E.

E &M child is home late Sunday night. The 4 little ones came home Monday afternoon as B thought it would be better for M and child to have some quiet. M's brother sent one of his older girls (he has 6 girls and 6 boys) to help this week.

Monday: I cleaned all 3 frigs, Hubby took trash to the road for Tuesday 5:30 AM pick up. I hemmed 4 pants of mine, mended 1 shirt of Hubby's and he has already tore another shirt, 2 bras, 1 dish cloth and 1 wash cloth. I made 12 meals of taco meat and bagged the mushrooms into paper sacks (they will last longer.) Got 4 phone calls done. Checked on daughter 1 who had wrist surgery. She's doing fine except it's her dominate hand LOL. Hubby got one of his calls done, second one to call back and has to go to hearing aid place to get his hearing aid cleaned.

LORD what a week... it's only Tuesday and it feels like it is been a month instead of a few days.

Hubby's one hearing aid is not working so they sent it in for repair or replacement. So he's down to only one...we should have realized it wasn't working as I kept asking him if he had them in when I was to the right of him which is the one that isn't working. It's under warranty so it's free.

I got my IRA dealt with over the phone so I don't have to drive 30 miles one way to deal with it. That's done for this quarter. Mine averaged 20% earnings.

Hubby got his IRA dealt with over the phone (60 miles one way). That's done this quarter. Hubby's averaged 12% earnings.

We will have to go in person in Dec.

I got my Humira ordered, sharps container ordered and 2 doctors offices to call me back when they can figure out when to schedule me. One actually had their "scheduler" program fail, just totally fail. They don't know who is coming in when at this point. No back up system at all.

I canned 12 pints of butternut squash and 2 pints of acorn squash.

Hubby went to 3 different Menards to get the last of the stuff for the kitchen porch, 4 outdoor timers for Christmas lights and some new roller handles and paint roller fills. I should have had him get brushes also as we are done to just a couple.

We are having pigs in a blanket for supper. It's what is in the frig LOL.

How is your week going?