not even a week... pantry update.

I sent Hubby down to get a pound of the unsalted butter and he came back up with his Hard cider (forgot the butter)and asked where I put the food from the black refrigerator ....we ate it or I took it to the Christmas party and I froze the prime rib. The eggs were behind the prime rib roast. 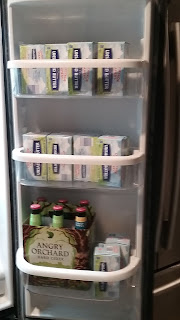 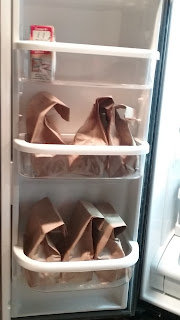 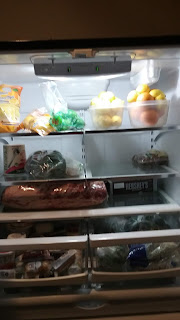 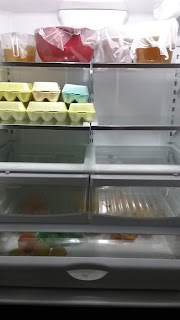 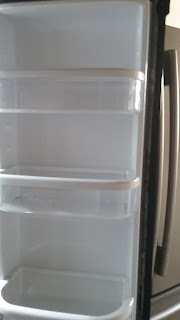 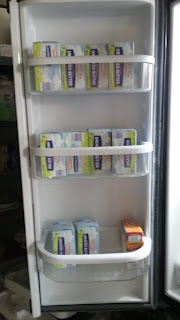 The citrus is now in the bottom drawer.  The veggies have been ate, what cheese was left after the Christmas party is now in the other refrigerator drawer combining all the cheese. The brown sacks are mushrooms, they last longer in a paper bag. These didn't have a chance as four of the bags went in the cauliflower stuffing(dressing),half on the 5th one went in a casserole. What is left is in the hole that was in the kitchen refrigerator.I will be going without fresh mushrooms until Jan.

That is beef scraps and broth on the top shelf from me dealing with the prime rib. That's on the to do list for tomorrow so by tomorrow that shelf will also be empty.

I had a good hole in the barn freezer but since we brought home a ham bone with enough meat to make to good meals and the broth and put the prime rib in it.  My hole is small again. I could get about 6 lbs of meat in it.

Normally I would be looking to fill in the empty spots in this frig but I know this coming week there will be lots of cooking so I will need places to put the leftovers.  Also I want to get the gray refrigerator down so I can transfer most of the stuff to the black on as the gray one is the one that has issues with freezing up and shutting down about once a year.

I have realized I under estimated how much dishwasher soap and dish soap I would need since I am cooking from the pantry. Two to three times with the dishwasher and at least one load of the big pans in the mudroom sink.It has one huge bowl so it's easier to wash big stuff in it.

When Hubby decided to change the 2020 budget

to include 15 months of medical instead of 12

a new to us "dog" truck.  I am willing to sell or trade my car for the truck as the car is definitely too small to transport my 3 dogs. ALSO it would take a car off the car ins.

he decide to not file for Social Security this year.

I told him that a couple of the chosen projects might not get done but he needs to price out the ones he has chosen for himself.

The big question was is there going to be battles when I mention he is wanting to buy it's not in the budget? OR that he hasn't done something and it's costing us money? His answer... Probably.

I am okay with these changes. I really struggle to see us saving all of that and replacing the truck but if you don't plan it don't happen.