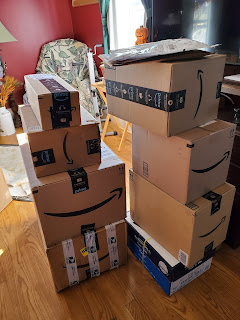 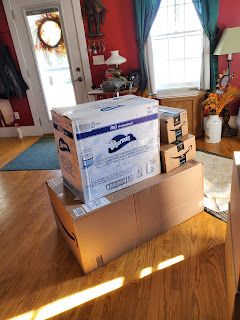 I placed 6 orders. They were scheduled to come in on separate days. SIGH. I got 5 of them yesterday within 30 minutes. No way I could deal with it as  I was canning turkey broth and apple jam.

I have 5 canners worth of food to take down to the pantry now.

I said something to Hubby about should we turn on the heaters in the pump house(pump house has a thermometer so we can see how low the heat is) and barn (1st bay) . He quickly said no but then admitted he forgot to buy the pipe to install the heater let along install it in the barn. But he didn't think it would get that cold in the barn.

So today I am now moving anything that would be ruined if frozen . I might end up spending a week moving stuff around but I would rather be safe than sorry.

Hubby went down to the pantry then yelled up wanting to know where the corn beef hash was.  Answer "Canned meat section". "Where is that?" West wall, north end of shelves ( do you know how tempting it was to yell back same place it's been for 4 yrs?).  He yelled back " Why is it with the beans? then a quick "Never mind, it's protein area." He did notice that was where the broth was now also . I was putting it with the soups but the soups have "grown" since I canned soup this year.

Guess I need to get back to figuring out where to stash this stuff.

Have a great day

PS. Charlotte is spending the day tracking birds that keep flying around the barn. She should sleep well tonight.