How our childhood affects our adult lives. 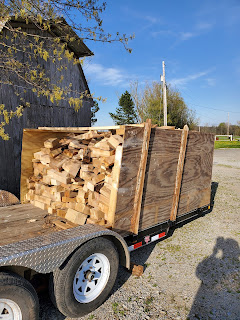 This is the small trailer we used to move everything here 4 yrs ago. These are the sides Hubby built for it to protect our furniture. This is  1.5 cord of wood, maybe a bit more but it's not 2 cords. He got it for $30 because the Amish guy wanted it hauled away or he was going to burn it in the field as it's scraps from his pallet shop. Hubby gave the boys that loaded it with him $10.

Hubby grew up on a sharecropper farm. I wouldn't have called it that but that's the term he used. Their bills were paid by the owner and they were able to write checks for what ever else they needed. The "money" came from a loan. IF there was not enough money from the crops to cover the loan in the fall, the owed amount just got rolled over... but it did not affect their lifestyle. The owner they worked for  was the one that had to cover the debt. When Hubby was about 25, he was working for the same owner. It all went down that year. He not only lost his job, but his home. The owner actually moved in to his parents house, as theirs was auctioned off and they moved in with his grandpa. He got married to his first wife at age 21. For the next 10 yrs he continued to get loans and run up credit cards. When we started dating he owed almost a half of a million and was losing the house his ex and him still owned together. (She had the same upbringing).

I was picking up glass bottle and lose change to help pay off the mortgage at age 4 so we could save for my brother (age 14) to be able to go to college (grants etc weren't common then). At age 6 I was still doing that and doing odd jobs to save for his college. We did it as a family. Daddy and Mother always paid in full for a car.

We come from opposite ends. Twice Hubby has had to file for bankruptcy because he did not learn as a child to think about the long term cost of something.  The second time was during his divorce and I went with him to the hearings. I had mentioned to his lawyer he needed counseling to learn to handle money. His lawyer brought it up to the judge and the judge did order it.

He still struggles a lot. I run the finances because he forgets to pay the bills, doesn't check to see if the ones on auto pay have ran through. Forgets that the amount at the ATM doesn't show what hasn't ran through (Daughter 2 was bank teller and said this was common and probably worse with kids growing up on a card that they don't put money in for(I am not sure he knows how to keep a checking account register as he won't and I do mean WILL NOT even list a written check in the register let alone something on the debit card.

I know he has talked to his friends and even some of the Amish about his struggles of not really paying attention to money matters. He even brought it up to his parents... and his mom said she now take care of the finances and his younger brother will do it if she dies first. His dad did tell him to think of the costs of not doing something or doing something first. Take a list to the store and if something he wants to buy isn't on the list to call home. He quit his bus driving job 3 months before he qualified for health ins during retirement. He is thankful MIL could put him back on her health ins even though  she was retired.

I am not being disrespectful when asking the price of him doing something or not doing something. I am working with him on where he wants to be in the manner he can deal with it. I think he has ADHD, his doctor is now looking at prodromal dementia aka MCI or does he have both.