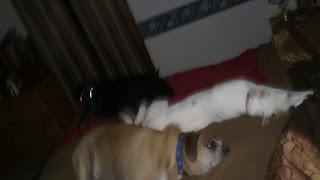 You can barely see Rascal (black dog)..just his eyes reflecting the flash LOL . It's a 3 dog night most nights but Rascal has always left the bed after he thinks I am asleep and Wilbur (boxer) has taken to getting up and going to curl up with Hubby on the couch. Hubby sleeps sitting up due to health issues. Charlotte (white fur) sprawls and she's only going to be 6 months on the 18th.She was suppose to be a medium size dog like her parents but the husky is coming out in her with her LONG legs . She's as long as Rascal and Wilbur and almost as tall.

Our days have been medical appointments as much as we can squeeze in this last month on the better insurance. Medical for the 5 infections I have picked up Thanks to having strep throat and not knowing it and another medical for my surgery arm that was doing good but has locked up now on Thursday. ADD dogs out (especially Charlotte as she is still potty training lol and does NOT bark will growl and yip but no bark) and dogs in.Add to that we are looking for a house...might have found one but still looking until the day it closes. Hubby has added attending a sporting event for each of the 3 grandsons that is playing. I've been able through the years to catch at least one for each but he hasn't with working. One of the positives of being retired. Plus he will be having breakfast with his 3rd shift coworkers once a month and breakfast with die cast coworkers every 4-6 wks

Pantry is over stocked... (I do have a place I can get boxes for the 1000 plus canning jars I have full ). I have canned goods where I don't normally have them so made a list and posted it on the side of the frig of what and where and the date I put it there. We have found a menu does not work for us as we end up stretching the meal for 2-3 more meals.Good to stretch the food might also be bad to stretch is as the food isn't getting used up LOL

Money is tight as we won't get regular income for a year maybe two. Add on to needing 2 vehicles and the down payment for a house.We have a budget, it's the amount Hubby would get if he collected social security at 62. Daddy was living on his investments and in 2008 lost everything except the assets so had to live on his social security. It was not a pretty picture but he did it. He still only spends $35 a week on his groceries, eating soups mostly. My niece does his grocery shopping once a week with her own shopping as she is within 5 miles of him when she is shopping. Gives her excuse to stop in and check on him also.

I am watching as we seem to nickle and dime ourselves by going to the store...so now it goes on a post it on the microwave and WHEN we go to town for another appointment we can decide to either go get it or wait until the next trip. I pitch the store ads when they come in the mail. Don't need to think wow ...that's on sale...I can shove it somewhere .

I haven't been to the store since Dec 1st. Mom O who has been retired now going on 20 yrs said this is really good. I have to make sure the milk expiration date is at least a couple weeks out to stay out of the store.

Deciding where to put the investments is hard. I read JL Collins The Simple Path to Wealth . I used to read the Morning Star online and I have watched CNN about the stocks. Stocks is risky but treasure notes. money markets and annuities are not going to make you money for the long haul. I interviewed 4 financial advisors and picked the one closest to my decisions that does sort of want to bang his head against a wall when I bring up paying cash out of investments instead of paying interest and private mortgage insurance for 10 yrs like they suggest we do.

I decided since Hubby is clueless and wants to remain  clueless (not really he just doesn't want the stress ) that we would be invested with 50/50 mix, 50 stock and 50 bonds. PLUS we were going to pull the down payment and enough money to get a new to us car (Daddy can't get in the truck) along with the taxes. I read JL Collins book The Simple path to wealth and read Frugalwoods blog about retirement. Might pay cash for the house. Then we wouldn't have to worry about a down swing (remembering 2008) and not having money to make the mortgage. We could easily live off Social Security.