Jan 3rd I have no clue

to why she thinks she has to be UNDER my legs when I am propped up on the bed. 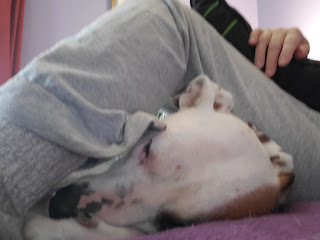 I was using the heating pad for my back. Guess she thought it was nap time.

Stopped to drop off stuff to late husband's daughter aka Daughter 1 who was in a car accident. Car total, she's bruised and has a swollen knee. Was supposed to start back to work from surgery on wrist and elbow the next day and now that is not happening.  We also handed her some money for groceries and such. Her insurance is getting her a rental.

Stopped to drop off stuff to Daughter 4's as they were celebrating Christmas on NY Day. The night before her car got TOTALLED along with a neighbors by a hit and run driver... cops are looking into another neighbor as the driver. Going to take a lot of evidence as no one has security camaras in that area. She is now driving her daughter's car and looking for a new place to live as that is the 2nd car totaled while parked in front of her home (no driveway). The other one was the city's trash truck.

Texted rest of kids about those two, surprised I was the first to know about both.  We are usually the last to find out as they don't want to worry us. UNLESS it is Son2 and then he has to tell us each and every detail. His new girlfriend said she figured out she does NOT have to ask how his day went as he will tell her immediately.

I went through all the seeds, glad I made notes of what to not reorder. Still spent 3 hours going through it, checking notes I made of what grew better and when. I have some that did horrible in the spring but wonderful in the fall.  Made a buy list with options of something we would like to try. This week I will be searching for what I need for the best price.

We saved $95.72 on propane as we prepaid for the year and it has increased by 35 cents/gal. PLUS we went 4 wks past our normal fill.

We went to the store for dairy only. Took 4 stores to get milk, large curd cottage cheese, plain yogurt and cream cheese. Hubby put the word out to local dairy farmers he is looking for dairy shares.

We saw an old friend that used to work with Hubby, his wife and him are preppers (actually it's his JOB to handle communities emergency's like wild fires, tornadoes floods etc). I out canned him and then gave him sources for canning lids and jars. He did let us know a local bakery has sales on Tuesdays. We got bread for 25 cents. It costs me 60 cents to make the same size loaf. We got four loaves for M as she had just got back in state so that took some pressure of getting bread on the table off her. We got bread, tortilla wraps, pita bread, buns, rolls, hand pies, doughnuts and bread sticks for 25 cents each for us and split it with Daughter 4. We finished off the pumpkin yeast bread and the homemade rolls first.  I spilt some of it up to freeze and eat.  We won't make it a habit to stop as eating processed breads are not in our best interest.

I am doing Frugalwoods Uber month (no spend except for necessities) and a pantry challenge (Good Cheap Eats) for the month of January. We both have several medical appts so we have tried to combine them so fuel costs are not so high as our medical out of pocket will be high. I am glad we have that money already in savings.