Surgery is Thursday afternoon.... I have bought clothes from Goodwill what I couldn't bum from others with acknowledgement that my son is buying some of what I bought off me when I am done with them. I might use what is left for paint shirts since I just toss what I had been painting in into the trash.Figured when the shirt is HARD after washing due to the amount of paint on it , it's time to toss it.

I dug through the medical equipment bag and found a mesh sling to use in the shower so my main sling isn't getting wet nor am I chancing messing anything up when I get the go ahead to shower. I think it was the youngest that had the sling. I have other supplies including the stool softener that seems to be number one with everyone that had the surgery that I talked to...makes me wonder if they didn't know that pain medication causes your digestive system to slow down and can cause constipation.Our friend that has had this surgery 3 times told me the worse was physical therapy and being able to reach above your head...he could only lift to the top of his head...I'm still hanging clothes on a line that is 6 ft from the ground... going to be some difference there I think. More worried about my elbow freezing up on me again with the lack of movement by being in the sling for so long.

Hubby doesn't braid hair and he's not the greatest on ponytails either even with his own ponytail, so I dug out my bandanas and tied them so I can pull them on with one hand to keep my hair out of my face while working in the gardens. 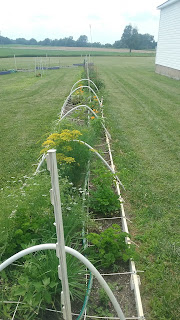 This herb garden is running me over daily with harvest...which is very good except for the lack of rosemary,basil and oregano...the rabbit must be Italian.Bunny sure hopped right by the lettuce and spinach to those 3 herbs and never touched anything else.

I have inventoried the pantry (not freezers) and wrote out what we need to be stocked so it doesn't matter which one of us is doing the shopping. I also listed the most I would pay for each item.

I have made a general menu based on what we have  with side notes of what is needed to be bought for the meal when it's made. We decided we would sit down on Thursday when we do finances and figure out a menu for the coming week as Hubby will be doing the prepping and I am trying to not over load him since he is doing my work in the gardens ...can't wait until he has to start doing the canning.  We decided on one meal a week either store bought made or eating out to give him a break.I don't think it will happen that often because of what I have prepped and put in the freezer that it's more of a thaw, combine and warm up type meals but I would rather budget for it than not.

We have decided for Aug since I am down and he might be buying one meal a week out that we would buy milk, eggs, in season fruit and lettuce as our lettuce  is done from Aldi's.Dog food for the dog as we are only doing 5 lbs at a time instead of the 40lbs as usually with the dampness we can't store it in the basement or garage. I've been using coupons and sales to keep the cost as the same as the 40 lb bags.Any other money goes for stocking up.

I mended some clothes, changed some buttons  on a couple things so I can wear them after surgery using buttons from my late mom's button can. I'm down to a flat sheet that the hem got ripped out by the wind on the clothesline, a skirt that needs a hook and eye on the waist band and a skort that needs a new zipper in the mending basket.

I have harvested and preserved spearmint, peppermint, choc. mint, chives, garlic chives, thyme, curly parsley, flat parsley, cilantro for coriander seeds, and basil. I bought a jar of oregano (maybe bunny will quit eating it) that was on sale from an Amish store.

I repotted 7 pots of flowers that were root bound and now have 7 pots plus 14 more areas in the gardens of flowers.All of them are doing fine.

I saved 10% on my MRI bill by paying it in full early.

I combined errands with tests being ran for surgery.

Used Kroger points and Speedway fuel card to save on gas money. Used sales and coupons when shopping. I shop Aldi's FIRST. We would use the motorcycle if it wasn't storming so much. Wet roads and bikes aren't the greatest either. We only have the truck right now besides the bike.

Helped a daughter fix her roof that her landlord was dragging his feet on doing (been 2 months). She'll be breaking her lease as she has already started court proceedings against him for not honoring the repair list he signed off on that he was going to do when she moved in. Well I guess that means HE broke the lease not her.Meantime she is living there until the court part is over. She likes where she is but you can't live with roof leaking and ceiling dropping, broken pipes and no furnace in OH winters. She paid for the supplies, and two meals and gas.Helped as we were bringing her car to our mechanic and she offered it to be used to go see my Dad after my surgery so I don't have to flip with her brother or rent a car as Dad can't get in a truck.

I cooked 10 lbs of hamburger and bagged it for meals and put it in the freezer. While doing that I had a bit more (not a pound) of hamburger so cooked it also, added a can of black beans that someone had given me, some leftover corn, homemade salsa and simmered for taco soup. Served it with cheese quesadillas and topped the soup with cheese and sour cream. Hubby thought it was really good , especially after I told him how I put it together.

I have two 2 x 2 square pots to plant for fall crops that I can do after surgery with one hand. Sort seeds is on the I'm bored list.

I have made a list on the whiteboard of things I need to get done that I can do with one hand so when I start the "I'm bored, I can't do anything" crap with Hubby he can pick something off the board and tell me to do it...Yes I can act like a whiney 2 yr old that needs a nap after I've had surgery...he's worse and he admits it.

I wrote out what I have to get done before surgery... each day is listed separately and priorities are noted. Keeps me on track and will become the list of what he needs to take care of after I have surgery.

I cancelled our Amazon subscribe and save as it is no longer saving me money.

I open curtains and windows in the mornings and late evenings (if not humid) and close them in the late mornings. Fans are on when we are in the room. Central air is off when I have a breeze and no rain.

I started my Christmas shopping from what I already have here.

I mailed out the rebate forms that  we had from this past week. Checked coupons and sales for this week's to buy for stock up. I am breaking it down to what is on sale with coupons only unless I am at Aldi's

Have a frugal week. Blessed Be