Frugal week with back procedure 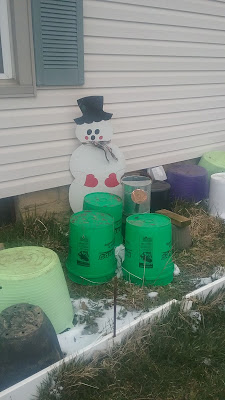 My grandson's mother in law to be suggested my snowman after I sent everyone a picture of my pots garden.

On Friday I had my back procedure, drove 2 hrs in snow, snow pellets, sleet, freezing rain and then rain...I don't think OHIO knows what season it is....my doctor had already given me my restrictions for the next 2 weeks before the procedure that I am to OBEY until the follow up appt. So we prepared for me to be down...It's not bad procedure, injections etc... I just am more limited than most because the injections flare up my cerebral palsy.We planned to eat at Golden Corral afterwards and was able to eat at lunch time so it was less than we had planned for. I put corned beef (bought on sale and froze), potatoes, carrots and cabbage in the crock pot for dinner that night which we were both thankful because Hubby wasn't really up to cooking since he hadn't slept that day and I was having problems walking.

I fixed the rest of the meals from the pantry.

I am hoping the weather forecast tonight is good so I can uncover my perennials this week and not continue to have a garden of pots.

We got haircuts while on sale and I noted on the calendar the next time they have their sale scheduled.

My son went to a coffee house and the one worker told him to rinse his paper coffee filter before putting the grounds in and he would be able to use less grounds. I tried it and have been able to cut about 1/4th to 1/3 rd of grounds in ours.

I combined sales and coupons to order the seeds I need to fall planting in late July/Aug.

I juiced some limes that were starting to get old and froze the juice. I zested them first.

Hubby moved our new washer in, I moved my wringer over to the side for now. I timed the first load that was for the longest wash cycle there is. About the same as what I do in the wringer washer but it took 1/2 the time in the dryer so the electric bill will be coming down. Plus I can toss a load in more often and use the drying rack for smaller loads which wasn't convenient to do with the wringer washer.

Did the usual of curtains open and closed, lights and power strips off,washing foil and plastic bags.

Hubby darned a couple of his socks. One of the things his grandmother insisted he learn from her.

My daughter's  been waiting to get moved into her new place. Her and the kids have stayed with friend as the landlord found busted water pipes and an issue with the furnace that stopped her from moving in. Her stuff is there though. He gutted the pipes and replaced them, fixed the toilet that he found wasn't working right after he fixed the pipes and is now replacing a couple parts on the furnace and making sure there is no carbon issues with it before letting her actually live there.Gave her money off next month rent. So we went to the store and got 2 lbs of spag, 2 jars of sauce, 2 loaves of garlic bread, and 3 lbs of hamburger saving over $16 on the total for the family that is keeping them until she can live in the new place. I also got 2 dozen of eggs at 69¢ a dozen, 3lbs of hamburger for $1.29/lb, tuna for 50¢ a can and bread for 59¢ a loaf along with rolls and some cin. bread and muffins that was marked down 50%. We had the muffins and cin. bread for snacks over the weekend and the rolls stuffed with meatballs pizza style (FB recipe) for dinner last night.

We paid on our loans that are against our life ins policies (taken out when Hubby went to 3 days a week working for 2 yrs , thankful his company kept him working those 3 days so we had health ins. and I was out of work). I have been paying more on his as his interest rate is higher than mine.It's the last 2 bills we had from those 2 yrs.

I finished inputting my coke caps and donated that money to USO. I am waiting to see what Coke does next for rewards.

We are planning to plant more in the gardens but not overwhelm me, which triggers back issues, with the upkeep. I would like an asparagus bed that is raised so that's in the plans also.

I have enjoyed the weather we had yesterday, since I was able to walk decent I took the dogs around the perimeter(carried cell phone in case I needed help since Hubby was in house studying for his EMT renewal test). Wasn't sunny but was high 40s so wasn't bad when there wasn't much wind.

What did you do?