Have you heard about the tomato shortage!!!!!!

I decided to look at what all that would affect...

Restaurants with salads, sandwich toppings, pasta, Mexican and other dishes that use tomatoes or tomato sauce.

Pizza places and BBQ joints would get hit also.

On the home front if you don't can it yourself...

Another thing I have noticed is in short supply/cost raised a lot. Campbells Fiesta nacho cheese soup and Campbells cheddar cheese soup. I noticed it when an Amish lady mentioned she was going to have to change her pantry soup because those two were hard to get. So I checked .... none of the stores around here have it...said it is on back order and it's through the roof in cost on Amazon.

It's not HERE WE GO AGAIN... it's more of HERE WE ARE STILL.

I know we will have a bill from the Urgent care for Hubby... but it should be the last bill we have to pay out of pocket, being the first time he has finished paying his out of pocket deductible. I can imagine what the Xray and lab will run let along the Urgent care bill

Solar water pump is paid for

The money for the chimney, coal, wood/coal stove, propane for this winter, 2 jumper boxes for trucks, 2 solar pump batteries , and 2 saw blades for the buzz saw are now in the savings.

We STILL need to save for next year's out of pocket. The company Hubby retired from puts out the health ins for their retirees mid Oct. about the same time Social Security puts out the COLA raise. So we will also know what we need to pay for health ins.

IRS is trying to change how those that inherited IRA's 2020 and after withdraw the money. If that changes I will have to withdraw more...and that is okay as Hubby will just not withdraw as much.

End of Dec 2018 Hubby retired, three months later we bought this house and as of Jan 2019 was pulling enough to cover doing this house  (Amish no electric, running water or heat) to ADA wheelchair accessible with propane, electric, running water, water heater, and internet. IF money gets bad we could slap plastic up on the windows in winter (like AMISH HA HA) and call it done.

At the end of the 1st year starting 2020 we reduced withdraws by $2000. Even with supporting Daughter 4 while fighting cancer.

2022 we cut it another $1000. even while supporting the business when the work wasn't coming in and buying the off the grid items.

2023... even with adding 25% increase in our costs as things are already up 10%( we aren't pulling more) and our financial guys are worried it will go up another 15% next year ... we will be cutting the withdraw by $3000...worse will be cutting by $2500 if we have to replace the truck sooner than later. Mainly it's only being used once a week if that. We really try to make everything on the Tuesday our chiro is on.

I am down to needing ham and turkey for stocking.

I am finished as of today with BBQ sauce.

Garden is still coming in so there is plenty of tomatoes to gather.

Posted by Chef Owings at 3:18 PM No comments: 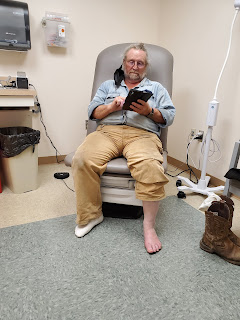 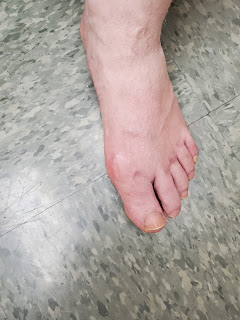 He thought he broke it at joint of big toe, I thought gout. NP thought both.

Was neither... still don't know. Put on steroids and to call his primary who he had called but couldn't get in to.

Primary got him in after hours on Thursday... thinks it's the beginning of gout so put him on gout meds. Hubby started them today(Saturday as Primary warned him they cause diarrhea and hubby is hauling during the week). It's only meds for a couple days. We think.... too low of carbs triggered it as it helps flush uric acid out of your system. He was eating less than 100 grams instead of the 225 he wasn't to go under.

Daughter 4 went to Urgent care for stomach pains. Found she had fatty liver , Type 1 diabetes, and gallbladder on top of her lupus. Her cancer screening results(test is the 14th) will be in Oct 21st, the day before her birthday. She had surgery for the cancer ON her birthday....said it was the gift of healing from herself. Diabetes runs thick in our family.  Her job is working with her right now, figures crossed they will continue to do so. Helps she works 2nd and can get appts done in the morning. BUT  it put a hold on her getting a promotion in the dept she is in (welding).