When needing a lift. 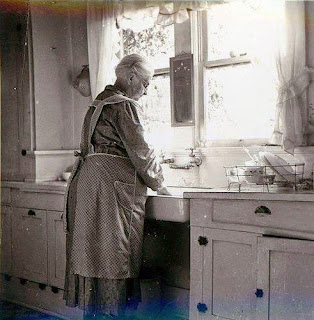 I found this picture on the internet several years ago. I wish I could find who posted it and thank them. The lady looks close to how my Nonna looked and that is my favorite apron style, more of a canning apron style. The kitchen looks like the one I grew up in. Not a kitchen she ever cooked in but she did sit in the rocker and watched.

When I am being over ran in the gardens, canning and freezing until I stumble in tiredness like today, along with a bruised knee due to Charlotte running head first into me. She was chasing a bunny. At least she didn't knock me down though she staggered herself .  I go down to my pantry and look at the full freezers and then the pantry shelves.If I have empty spots going into fall I do NOT have enough.

We decided to have at least 18 months solid of food in the pantry/freezers and with acknowledgement it could stretch to 2 yrs.

YES really... Hubby said something about the  freezers, I told him we have to eat 2 whole chickens, a pork butt, 6 lbs of  shredded turkey and two beef roasts before Thanksgiving. I need room for the hams that goes on sale at Christmas.

I know I need more tomatoes (which are right out there in the garden that needs cleared for winter and I need to do my own so if I need more I can let N know) I need green tomatoes which are coming in the end of the month or the beginning of next month when N clears his hoop house for the winter. I need 180 qrts of tomatoes for the year. If I can in pints, double that to 360. Pizza sauce is done and that's not in that count.. I have 30 of the 6 oz jars.I have a dozen of store bought tomato paste.  I have 63 qrts. I am short 117.

If I can the same amount as I did yesterday I will be done in a week... Need to really focus on that... 9 days as I don't can on Sunday. Means I will know if I am short before N closes down his hoop house. If I can I will go help him close it down so I get a discount on the tomatoes or even free.

E ran into the guy that built our home. He said the spouting on the south side of the house and off the east and south side of the barn should be running to the field tile that goes to the pond.The only thing that should be running to the county tile is the west side of the barn and it goes to the corner of the property towards the county line.  So E and Hubby went out and checked. They found blockage on two of the lines that was mud.... M remembered her brother who lived here before N did  used to wash the garden stuff in the pump house (main drain to the pond) BUT they wouldn't have used much water to do that so the dirt from the veggies blocked the line. N and E, when they lived here used the water they used to wash veggies to water in the hoop house so it didn't get"wasted". E helped Hubby unplug the two lines so we only have 1 line to repair and then Hubby can put in a field tile out at the corner of the property to run the barn tile to the pond. SAVING hundreds of dollars.

We decided to not turn the furnace on even though it was 42 this morning , high is to be mid to high 70's, until the house drops to 68. That makes the front room 64. Hubby can't handle anything colder when he is sleeping. I am hoping this year that room won't be 4 degrees lower than the rest of the house. As we keep insulating /caulking where we find air leaks.

I've had to use the drying rack a couple times at night to finish drying the clothes that didn't dry on the clothes line after hanging for hours.

I open curtains and blinds to the sun to warm the house, shut the windows and doors in afternoon before it starts cooling down to keep the warmth in the house.

Hubby got milk when he was picking up meds so no special trips to the store.

We got a free meal from an Amish couple. Hubby and they had went to an Auction... we didn't get anything but on the way back the wife asked if I had supper waiting. He said no, I would fix it when he got in. They asked if they could use his phone to order pizza. Sure , he even had the number in his contacts. They placed their order while Hubby secured the load. When he stopped for them to get their pizza , they had ordered 3 for their family and 1 for us. We ate it for 3 meals.

Instead of using the whole package of smoked sausage I split it between baked beans and jambalaya. Other wise Hubby would have ate 3/4 of the package by himself. I made corn bread to go with the baked beans and sausage (cooked it together) and Hubby ate the last of the corn bread for his bfast.

We bought 1/2 gal of orange juice. Daughter 4 bought a kit to make hot sauce for Hubby for Father's day. I have tomatoes and onions and lime juice but the one called for OJ. Hubby got the cheapest he could get. SO we will have to focus on drinking what we don't use. He was taking back a med I had gotten that I can't take due to blue dye. They found out the warning system they have wasn't working so they gave me free meds along with several coupons... they also switched it to cash payment instead of insurance as it saved me $200 as they used GOOD RX for the cash. I said something to Daughter 4 and she said she very seldom uses her ins for meds as she usually can get it cheaper with GOOD RX.

Even if it means there are dishes sitting in the sink, I do not run the dish washer. unless it's completely full. So instead of every day it might be every one and half days.

If I am washing pots and pans by hand, all gets washed by hand. Same amount of water is being used.

We are saving shower water, canner water etc to pour down the drain that goes to the pond. Even with the 5 inches of rain we have had last week , the pond is down 3 feet from where it should be but the fish are no longer in danger of dying from lack. I thought it was 2 ft but Hubby and E measured it when tracing for the tile. Scary thought as the pond is only 8 ft deep at it's deepest. We know because we had pump put in to circulate the water,aerate, in it for the fish that is tied to the windmill we had put in.

I traded a large "family" size of toilet paper I can't use due to allergies for a loaf of bread and 2 pies.

We are reworking our plans for the garden. Hubby now knows who will grow what on a regular bases and they water (hose and Honda motor ran by gas on their wells) so we can figure out what we REALLY need to grow on our own.We would like to add more fruit trees and get rid of 3 trees that are not making anything.

We bought some trees to plant last year. When I sent a picture to the company they refunded my money as there are 6 that didn't get get leaves or show any signs of growth. I really felt when they sent them, they were sending by zone not by what the weather was doing. I also let them know they were delivered when we had freezing temps and that's when they told me to send pictures to them this fall if they didn't do anything. Was nice they kept their word but I won't refer them or order from them again.

I started washing the winter bedding, did some of the sheets today and hung them on the line.

Are you prepping for the fall and winter to come?