How the year ended financially.

Use it Up, Wear it Out, Make it Do, or Do Without:

It was during this time that Calvin Coolidge was quoted as saying “Eat it up, Wear it out, Make it do, or Do without” (Later, the phrase became more popular with, “Use it up.”)

We live in our Ira's and what ever we earn. In Dec  Hubby started getting his Social Security.

We had several projects to do, some had the stuff here already.

Jan 2020 our investments were down to $300,000. Hubby decided to not work for Ohio dept of transportation plowing snow. SO he started a business hauling and doing odd jobs for Amish/Mennonites. We picked up some cash making ice blocks for E and M since no ponds or river froze for the Amish to make ice blocks. I picked up some selling asparagus, traded asparagus for 10 gallons of beets also (mother in law got half of it)

We had NO money put back for anything.

Car insurance stayed the same since Hubby bought a new truck $8500 a year.

Dogs (we did find cheaper food and meds that work better for Wilbur and Rascal, Charlotte still needs shots for her allergies), non food, pandemic crap, food, gardens, fruit trees and berry bushes etc . I did not track very well since the goal was to restock completely for a year.

THEN in Sept Daughter 4 was diagonized with ovarian cancer. The new job she had for only 25 days let her go as they would not cover her time off, they offered her to quit due to medical so they could hire her back when she is recovered as they don't do rehires any other way. IF she had stayed with her old company whose pay was about half of the new company she would have had medical time off, with pay and medical ins. That so called "change for the better" she thought she was doing, actually was for the worse. We figured out her budget...$24000 a year since a hit and run driver totaled her car she is driving and I CUT our budget so we wouldn't pull more from our IRAS to cover her. I am thankful I am completely stocked in non food and food before she went down.  The money we are using to support her would have been used to redo the front porch and add an ADA wheelchair ramp.

Within the last week we have put money back for emergencies so we don't need that now.

We put money back for the medical out of pocket needed for the year.

Hubby is now getting his social security to cover his business if needed as he did know there would be slow months. Any money he doesn't use is being divided by 4 between the mortgage, 2 loans and savings.

Any earned money gets divided by four also.

When Daughter 4 is supporting herself we will let the money divide the money by 4 until we reset for next year.

I need to keep  better track of the finances going out and in.

How are things going for you?

Son 2 came back negative in 3 tests. He did talk the friend into going to get another test and she told her dad she was not coming back to take care of him if he didn't go get tested. Her dad went with her to get tested.

Daughter 4 came up to get the car tags and some odds and ends and bring jars back to me. 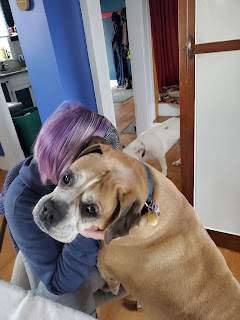 Wilbur was happy to see her.  Rascal gave kisses because Wilbur did as he is only friendly with someone if Wilbur is... and Charlotte who is actually the pup to Daughter 4's dogs kept barking at her and wanting her to play chase..you can just see Charlotte over Wilbur sneaking up to tug on Daughter 4 sleeve.

She had her hair dyed lavender because she let a person that was taking their tests for recertification for hairdresser...she flunked as she burnt Daughter's blonde hair to white with yellow burnt roots. Another hairdresser conditioned the hair, gave her special shampoo etc for her hair to use daily to help it get healthy again and then hair painted her hair lavender (Daughter's choice) ... actually as much as I hate to say it...the lavender does more for her than her natural hair of blonde as she looks to have some color in her face instead of being Caesper as she is called. Does not help she is starting to lose her hair due to chemo.Said she was thankful her hair was thick to begin with as it might be too thin or gone in 5 wks.

We all had masks on in the home, social distant, I sprayed her with lysol before she got in the car and sprayed the house with Lysol after she left.

She is tired and is having some side affects of Chemo...she knows it's the side affect as her doctor wrote out what they could be so she can just keep telling herself she is okay, it's just a side affect. Glad she takes it at night and usually sleeps through most of it but has had some visual hallucinations when she wakes up in middle of night to potty. She has learned to turn lights on and that seems to have stopped it. She can't wait to go back on her lupus meds and she really never figured she would say that.

We are figuring her recovery from the cancer and mine from hip replacement should be about the same time. Which is also about the time her daughter should be delivering Elizabeth AKA Lizzy.

Hubby put the cup she bought him on his desk and put his pens in it. He only drinks out of a travel mug from Speedway. She thought it was good since that is where he pays his business bills LOL.