Another week , the size of great grandbaby 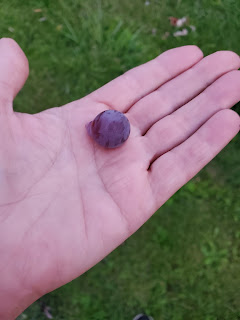 yep, baby is the size of a grape. My granddaughter tells me on a regular bases how big the baby is comparing it to food. She found an app for her phone that does that for her.  She said she hadn't checked this week as she was going to go to the doctor for a check up.

It's Monday, clean frigs, gather trash and take to road, do the weekend laundry.... normal Monday chores... add on 2 bushels of green tomatoes that got sat on my front porch LATE Saturday NIGHT.  I have one bushel sliced onto cookies sheets and in the deep freezers. Tomorrow I will vacuum bag them. I took the core out and then put the end pieces in containers to make green tomato relish (NO CABBAGE). That will be when I have 7 lbs of ends as that is what the recipe calls for. I also canned 4 pints of pickled watermelon rind. We have never had them so not sure we will like them. I washed another load from the Rubbermaids. All the clothes lines are full along with both drying racks of sweaters. I think I only have curtains and bath towels left to do along with decorations. dog blankets... Yeah I know they are still needing washed. I still have red tomatoes to harvest and can. I really need more cookie sheets LOL.

Homemade noodles and chicken over mashed potatoes and pickles

Hubby unloaded the dishwasher while he was making coffee and reloaded it and actually turned it ON.  He got a couple calls for rides. H and B needed a ride to go see B's cousin that was hurt bad in an accident. Then he had to take H to E as M's cousin in Indiana died from cancer. Funeral is Thursday. Trying to make sure the kids not going are taken care of and the farm animals are taken care. They will be back Friday morning.

I vacuum bagged 140 some slices of green tomatoes that I had frozen on cookie sheets. I reloaded those sheets with more sliced green tomatoes.

We batted around some thoughts on the finances for next year. Waiting to finalize it when we know what our health ins will be fore next year. We chose 2 different budgets also thinking things might change with the election.

I washed and dried another load of winter odds and ends

Hubby was "taxi" today but did help me clear 5 garden boxes and mowed the north garden down after I finished picking what volunteered grew there. I pulled 6 different dried beans that I can shell later on a rainy or  this winter. I pulled turnips, kale, some red leafy (I think Asian red mustard but not something planted this year) cucumbers and some red chard. I harvest the last of the fennel bulbs and started cooking it to put in the freezer. I pulled small carrots the size on my thumb that I will clean and toss in with the relish of green tomatoes. I harvested chives.  Chives, greens, and carrots tops went into the dehydrators and I'll grind them up for the "greens" jar

I washed the winter sweaters and let them dry on the drying rack.

Lousy day all around... the good news is I am not in the hospital... I ate barley flakes cereal and it triggered my tummy , thankful it didn't trigger the Crohn's but definitely can't eat a cup of that cereal and not end up in the bathroom most of the day. Doesn't help the tummy muscles are very sore with the amount of work I am doing that works the core.

Five out of the 6 kids lost friends this week. Three of the death's were mutual friends. There was a total of 7 funerals.

I finished the paperwork for the life insurance Daddy left through his old employer. Was strange to get something from a company he retired from 33 yrs ago.

I started the paper work to file for Social Security. I already know that I will get more (a lot more LOL) filing as hubby's spouse rather than my own. So I have to wait another month to file it. Since we didn't count on SS when we did our financial planning for retirement, it's an "extra". I

Hubby ate leftovers. M sent cookies over before they left for a funeral on her cousin who died from cancer at age 31.

Felt decent but knew if I went full force I would go right back down.

My uncle Sam is in the hospital dying from brain tumor that went into cancer. He has battled this for 2 yrs since my aunt died. They had gave him 6 months when she died.  We are praying he does not linger.

I washed half of the winter curtains and found some winter blankets (not where they should have been) so washed those also.

I shelled dried beans. But stayed out of the gardens since I knew I would over do it.

We had loose meat tacos... not taco meat just hamburger that I had cooked for the freezer.

All the winter curtains are washed and dried.

The storm windows for the front room are washed and installed except one that the wind caught and flipped as we had it propped up to dry after washing. Shattered the glass so it's now at the repair shop getting new glass. Should be ready for pick up by Wednesday if not sooner.  I took the screen out of the kitchen window and washed both sides of window of it and put the screen back in.

I harvest the sweet potatoes and treated the yard inside the fence for fire ants. Hubby mowed and did some trimming. He was hoping it was the last time but the back yard is already looking that it needs mowed and he did it 2 days ago. Hubby set a trap for a mole that is out by the road but working it's way up to the north gardens.

I sorted green tomatoes out of some that are just turning red. I put the green ones in the frig as I will be processing them on Monday.

We sat down , took a break and listed what jobs we NEEDED done by end of Nov. I broke it down to big jobs (all day or more than 1 day) vs small jobs that can be done in less than 4 hrs.

He did admit the business costs more than he thought it would to run, it takes more time to make the money to break even let alone make money than he thought it would and he broke his own rule of NOT scheduling work on Thursdays( that's appts, errands and work at home day THAT HE CHOSE) and being home by 6. He is slowly starting the "I can't do that today (when it's a late day haul) but I can do it at this time".  He had one out of 6 tell him they would let him know as they would try to find someone else. They called him back in an hour to do the haul. Two of the other haulers have started it also as they were going through the same thing. One of the companies that they haul to closes at 3:30 so they have to have the load to them by 2 to be unloaded by closing. Twice now Hubby has had the load on his trailer over night. He now charges extra when that person waits to load him too late to get to the drop off.  since he can't take a load until that is unloaded. He told the other drivers he was doing that... the person quit waiting to the last minute to have the load hauled.

Hubby picked up Wendy's since he was right across from it dropping off the broke window. Said he thought we needed to relax the rest of day. I think it was more he didn't want soup for supper and decided to take it out of his pocket money.

I did pull a ham steak, box mac and cheese and a pint of green beans for supper. I pulled dinner sausage patties for tomorrow to go with sweet potatoes and cucumbers. M sent over a loaf of bread late last night.

Hubby is updating some of his business files so when Oct hits he can just finish the last couple days and file. He has 2 reports to file in Oct.

I paid the last bill for Sept... balanced the accounts and transferred the next month's income into the checking.

How did your week Go?