Daily break time with Charlotte. Nice and sunny, I don't care how weird it looks or the laughs the Amish get when they go by and I am sitting like this. 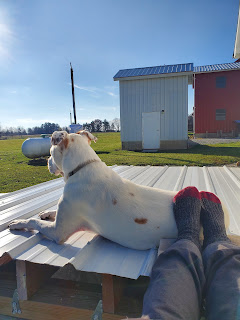 I'm with Charlotte. It's been a year since we lost Wilbur and Rascal. I still miss them daily. So glad to have this time with her. Plus the roof was warm and my feet were cold LOL.

Hubby was agreeable to the 2023 budget, then he noticed I cut it so we are mostly on our social security and my IRA.  HE spooked when I said I was starting it NOW. If we can't do it NOW, we are going to struggle when it's fact. I calmed him by reminding him we were still going to be pulling from his IRA. It will also let us know BEFORE he lowers his pull if we can actually do it. IF we can do it, then he might be able to go even lower on his pull. I have to pull from mine. Inherited IRAs have to be gone in 10 yrs.

I was going to do some decluttering, cleaning and last of tomatoes along with my NANOWRI today... BUT it's going to be mid 70s so I am washing bedding, throw blankets and furniture covers today. Not on schedule which threw him also. But I usually do that kind of stuff on Saturdays but they are forecasting gusts over 40 MPH and scattered showers tomorrow. It's a pain to put that kind of stuff on the drying rack or kitchen porch clothes line. It was nice to look across the pasture and see M had her bedding out on the line also.

We had gas station pizza the other night (it's decent pizza). Couple Amish paid for it  as their ride didn't show up to take them home (just got off the bus at the gas station) so he let them use his phone to let the late driver know he had them. Driver admitted he forgot about them. All of them happy Hubby was there for fuel.

We have been eating from the pantry. I actually caught myself thinking I don't want that, was on menu for Hubby and what I would have took to son2's so both of us would have ate it. Was enough to realize it can't be what I want or don't want. So we had what was listed.

We have enough beef stew left that I think I can add the leftover roast beef that was in freezer for Hubby while I was gone to make a large beef pot pie for us. We can eat the leftovers tomorrow as we are both home. I'll make taco soup for Sunday with corn bread. I need to make bread tomorrow also.

Daughter 1 is back to work but having issues from her carpal tunnel surgery. So back to the doctor for that.

Daughter 3 had her new neighbor move in Monday and died yesterday. They think sugar as he was a diabetic and he was found in the front room but his insulin was in the bedroom. Her oldest girl (in nursing ) heard  a loud noise and went over to check to make sure he was okay. She could see him through the window he was on the floor so called 911 when she found the door locked.

Daughter 4 got a call from her younger son's grandparents that he has been living with, his dad had custody of him when he died (both him and his brother died from inherited kidney disease with in a year of each other)  and he passed the custody to his parents as Daughter 4 at that time was bouncing around from home to home. She wasn't happy with it but since they didn't have anything in the paperwork stating he was to go back to his mother she agreed because her son said he wanted to live with them. He has failing grades in 2 classes (in high school) and blamed her (didn't bother to get him tutoring nor ground his butt when the first note came him from teachers about the low grades) and then tossed him out, didn't even let him wait in the home until she got there. YES COPS GOT A RECORD OF IT. The grandfather (step grandfather) did gather up most of his clothes and stuff  when she pulled up in front of the house. She filed of emergency custody. Glad her new job has legal insurance that she bought. Her health insurance wants a second test ran to see what stage the cancer is at for the hysterectomy. Her doctor had already told her he runs 2 tests a month apart as he has seen false negatives and positives on the tests.

Daughter 2 said ( I already knew but let her vent) her son 1 and his wife were separated again (4th time) And Son 4 was looking for his own place as he shares with older brother. Son 2 is better and released to go back to work and Son 3 in Army is only able to connect once a month now. Was in Italy the last she heard but his unit was on the move.

Hope things are calm and stable with you and yours