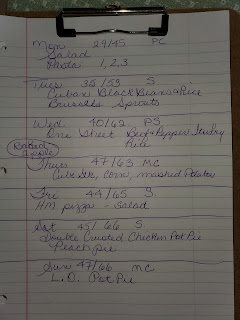 I sat down Sunday night and made the menu. We then decided to freeze the Brussels sprouts so I figured I would pull out the last roasting chicken this morning to make room for the sprouts.
There was 2 roasting chickens. I think one was Son 2's as its smaller than I buy. I told Hubby I was roasting both. They will take less room with the bones out of them and I can make the pot pie and a pot of soup from the birds after a meal of roasted chicken. They are in the downstairs frig thawing.  SO a change in the menu already.
I am definitely ready to be done with the green tomatoes. What ever is left after I can another 16 pints is going to be left to turn red... if they don't turn, sometimes paste tomatoes don't, then they can just go to the compost. No one else wants them.
I called Hubby's finance guy (since we now each have one) and asked it we could meet with him on the same day I have an appt within his area. He is two hours from us so this would save us a lot of time and money if he can. They are doing appt only and he was at an appt outside the office so we have to wait until the secretary gets a hold of him to find out. JUST an update, they decided due to our age and my surgery pending that we would do a phone conference. They offered ZOOM but we don't have that good of internet here for that.
I've hung clothes on the drying rack and clothes line.
Hubby went to the store for milk and heavy cream and brought home rolls and French bread that had been marked down. He felt since I couldn't bend over due to back injections that I didn't need to worry about making bread. They were priced lower than my cost of making them would have been.
I put the clean oil lamp wicks I used last year in the windows again to stuff in the windows were there was a draft. Hubby turned the ceiling fans to rotate the other way for winter. I closed the ceiling vent in the front room so heat would not go up to that loft and put a heavy curtain in the stairway to stop heat from going up that way.
Hubby went out and worked on replacing the old fence. He now has the south section done completely. That leaves the east section. He also mowed the yard mulching the leaves as he went. Two for one.
I used the leftover apple tomato soup to make sauce (added homemade sauce) and made pasta for supper along with meatballs that I made and froze. Sliced some of the French bread and made it into garlic bread.
I paid all our bills that was in or on auto pay (deducted, I just will check to make sure they go through). We have 1 bill still out, that is electric. Our propane company called as we had a winter fill at this time last year and asked if we needed propane... it's fine I have been turning temp down during the day and when we are gone. So that helps. PLUS Hubby got some air gaps closed up so that helps also.
Back to work for me as I am now taking the brussels sprouts down and freezing them
Posted by Chef Owings at 9:02 AM 8 comments:

I am thankful for our forever home that we designed for wheelchair as I talked to an older friend last night that has to walk the furniture as she can't get her walker through her home. Her youngest added railing so she can get out the back door from her bedroom if she needs to get out of the house from the bedroom.

I am thankful for the sunshine as it's always a better day with sunshine.

I am thankful the Amish man that put up a new rain gutter on the barn and hooked it to the field tile to the pond , checked the rest of the rain gutters and fixed ones he found not working right without add more to the bill. Now we have another section of rain gutter hooked to the field tile for the pond and the cubby hole gutters are one section instead of three and drain out the gravel of the driveway not under the front room and front porch. He also left a note that the birds had a nest in the north gutter but it was starting to down pour so he didn't mess with it. Hubby took care of it the next day along with putting screen in to stop it from nesting there. We had leaf covers installed when we put the gutters on... should have spent the money and got the one piece rain gutters.

I am thankful that I have my pantry over filled, having to store cases of home canned goods in the upstairs loft as it will allow me to pass organic food to Daughter 4 as she fights cancer.

I am thankful we can vote for our leader,we have a voice in who does win unlike other countries.

What are you thankful for?