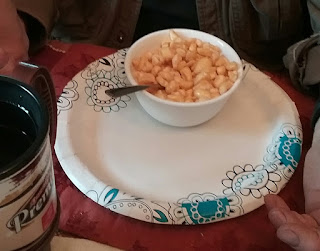 The paper plate was because Hubby was having issues with his hands so he uses a paper plate for a spill guard...it's about 5 days old in this picture.The cereal is the frugal....HA HA really it is as we didn't buy it. Daughter that was moving (the kids and her are staying with friends to keep the kids in the same school district while she hunts for a new place) gave us the cereal.She didn't know why the boys weren't eating it but it had been there a week so she gave it to us...might not have been eating because it was STALE. That didn't stop Hubby ...it is now gone into his tummy.

I went to Aldi's, spent $54 and got $5 off with the grand opening coupon they gave me last week. I have 2  more coupons for the following 2 wks (1 a wk). Not sure what will be on those lists besides another ham, maybe cream cheese . The only thing we need for stocking up I have a rain check for at Krogers and Aldi's doesn't sell it. I'll see, have to spend $35 to get the $5 off but I am not going to be buying something just to get $5 off.

I roasted the two turkeys today we bought at Krogers for 57¢/lb(Walmart at 68¢ and Aldi's was         99 ¢) We had turkey wraps for dinner. I made a small batch of white bean/Poultry  chili and we try that for Monday night dinner. IF we like it I will make more and can it.  I tossed both carcasses in water today and made bone broth. Will be straining it and canning that also.
The meat will be bagged(tomorrow in 2 cups bags and frozen for meals.By putting it in the freezer already cooked the meat from 2 turkeys takes up less room than 1-15 lb turkey would.

We ate out after going to viewing and before going to Aldi's, ate the special and used a coupon we had. Provided us dinner that night, lunch for Hubby that night and dinner the next night for both of us. I added veggies and melted cheese over the french fries (neither of us prefer french fries) along with some cooked bulk sausage that I keep in the freezer) . I would definitely say we got bang for our buck.

We are trying to set the frigs up to reflect how we will be eating from the pantry and not be wasteful as I know it's easy in the winter to get tired of heavy winter meals. We love variety so I need to keep that in mind.

I mended a shirt and pair pants.

I added water to my lotion bottle.

We ate from the pantry except for once. Our week's run Saturday to Sunday.

Tonight a couple friends called and asked if we could go out to dinner with them because they are leaving after Thanksgiving for about a month. I told them we would love to but it's not in the budget for this month due to spending extra money paying for the gas to move our daughter and the new vet bills, there was some silence but then oh , okay, we understand. They called back and offered to pay for our dinner as an early Christmas present so I accepted.Since they are retired and on a budget they understand the "it's not in the budget".

Blessed be
Posted by Chef Owings at 3:03 PM 7 comments: