Day 17 of the Pantry Challenge 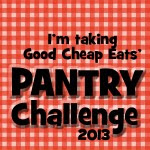 Day 17 of the Pantry challenge. I like this challenge for several reasons, first because it holds me accountable, second because I focus on using what is in the pantry and not running to the store and last I can clean empty shelves a whole lot easier than shelves crammed full when I do the spring cleaning.

I have a pork roast along with the extra bones from the roasts I ground pork from yesterday in the crock pot. I will shred some on flat bread for sandwiches and serve cottage cheese,applesauce,and pickled beets.

I need to deal with the ham we had last night. It made some good broth for soups and I can package it down for sandwiches and casseroles for later. I will keep the bone and toss it back in the freezer for bean soup later.I will strain the fat off the broth and put it in ice cube trays and then in the freezer so I can make gravy from it later or use it as "oil" when making corn bread or cooking.

I can hear those moans people...natural fats doesn't bother hubby or my cholesterol... shelled seafood sends his up through the roof and microwave popcorn (the oil used to pop it) sends mine through the roof. As long as we eat like we did as kids our cholesterol is good.Neither one of us ate processed food much as kids,coffee, tea and water was the beverages usually served. Dad hunted and fished so our protein was wild game or fish while hubby's family farmed so they had cattle and hogs to butcher. We both grew up with gardens that supplied the pantry for the winter.

I still stock my pantry that way for the year.