In the pantry .. close enough ... garden coming in 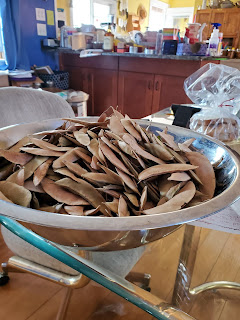 Henderson lima beans to shell... 2 1/2 gallons of these to shell. 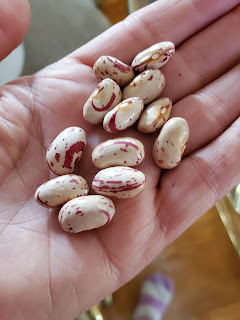 Italian cranberry beans ... have 2 1/2 gallons of these also to shell. 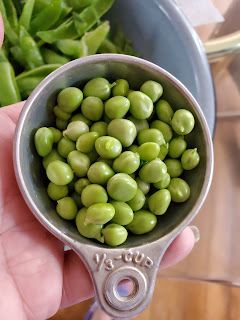 I got 1 1/3rd cup of peas off 24 feet of garden beds SIGH. I need 2 2/3rds cups more to have enough for ONE meal a month. It wasn't a good year for peas. I am hoping I get enough as they are still blooming. But if not, we will make do.

I have 11 jars of peach pie filling to wipe down and move to basement.

I have 13 jars of rutabaga to wipe down and move to basement.

I have 2 jars of turnips to wipe down and move to basement.

I was given 3 cantaloupes that need cut and frozen.

I have 2 small watermelons that need cut and frozen. I might make pickled watermelon rind.

I was given cabbage so I will add that to what cabbage I have to can cole slaw. Will also make fried cabbage, New England boiled dinner using smoked sausage instead of corned beef and cole slaw with mayo dressing.

I have apples,( some we bought but the second apple tree is almost ripe now) so that's apple pie filling. apple jam and apple sauce with cores and skins going into apple butter and jelly. Ham and apple Welsh rarebit (rabbit depending on who says it) is on the menu as Hubby's request.

Hubby got some extra $  so he bought 8 jars of 32 ounces mild hot pickled cauliflower. We go through a jar a month and I had 4. He called and asked how much I had. They were on sale for 25% off. The only condiments we are low on is Heinz 57 steak sauce and sweet and spicy mustard that I will get when I see a sale.

We are at the point we can go a year with out worry. We have what we need or can make do with.  I follow Daddy's advice to have at least a year, eighteen months is better and two years worth is great for hard times. M found this out when 4 yrs ago she stopped canning and gave produce away or sold it at auction because she had 1 year's worth. The following year they lost their main garden, not once but 3 times to flooding. Lesson learned. That year she had to buy peas at the store in cans so they could have peas once a month.

We still have garden coming in.

grape juice (not quite ripe yet)

cucumber (down to just enough to eat fresh)

Cannellini beans to harvest and shell

basil and sage. (other herbs need trimmed back)