started out being really frugal.

Monday we went to Wagner's IGA and hit the clearance cart to go along with the few odds and ends I didn't want to pay the Kroger's prices. Did a huge score on different breads and sweets for the freezer.Plus points for fuel and 5¢ each for bringing my own bags.

I stopped a FISH thrift shop and got 2 pillows to recover,scarf,2 skirts(one which be use to recover the one pillow)5 nightgowns of the style I love but never want to pay the price for and 1 pair of shorts for a total of $11.

I went to doctor appt... I had dropped my A1C from 6.4 to 5.8 (GO ME) and my cholesterol below 200, WITHOUT the statin ..haven't seem that low in a decade. Doc took me off 4 different meds as my blood work showed I was finally up to normal. Doc changed my one med from 90 days to 360 and sent it to a certain pharmacy because they sell it for half the price of getting it every 90 days for a year.. Saved me around $50.

I went to CVS to pick up Hubby's meds and the clerk caught I had been bumped out of the rewards for prescriptions so she put me back in.

I maxed out on May's pts at Walgreen as my FITBIT tracker is connected to their app. I now have a $10 credit but 3000 pts away from having a $20 credit.

I went to Ollies as they had fans in and  I had a 15% off coupons. I picked up 4 fans of different sizes and styles for 1/4 th less before the coupon than I had priced elsewhere.

Hubby called our phone company and complained that the credit we were suppose to get from April when both our land land and internet was out for a week wasn't on the bill like it was suppose to be. Took him 2 hrs to get it dealt with which didn't put him in a good mood at all but as I reminded him it got the credit If it's not on the next bill he will go through the roof.

I requested a credit from my GI office as they had charged me for her to file out family leave and she doesn't do that unless you are having a procedure and the front desk didn't know that as she had just started...also I found out my ins PAYS for that to be done so I shouldn't have paid anyways.She lets the hospital doctor do that instead. BUT Hubby's employer wants it filed in Jan so my primary was able to do it since he does all my blood work and meds to fight the malnutrition the Crohn's causes.  They were suppose to credit it to the Jan bill , then when that didn't happen it was send a check and then when I went in April it still hadn't been credited or sent . My GI nailed the billing office and stood over them until she saw that is was credited to my bill from April... GOOD DOCTOR.

I made potato salad, after I boiled the potatoes I just lifted them out instead of dumping the water and added some cold water and then put the eggs in to boil them.

Tuesday we had chiro appt and dogs went to vet.
I scheduled a manicure (not my norm) for Friday when we go in for another doctor appt at the salon across from Chiro. Since I'm not getting a gel just a regular manicure it wasn't as expensive as I thought it would be. This is my Mother's day present from the kids...it's going to cost them $5 each including the tip.
Our chiro was less than $6 for the two of us thanks to our ins now covering that .

AND THEN OUR WORLD FELL APART

Took the dogs to the vet to get their nails clipped (takes 3 of us to hold them down and clip). I always get the dogs weighed. Miss Kira...our older dog...about 100 yrs in dog years...had dropped another 3 lbs in one month... she did that in April and we didn't think anything of it as she was starting to run the perimeter more with the warmer weather... but this time I knew it was bad we had another dog, Cookie do that when she got cancer..Miss Kira has a tumor in her spleen/intestines that is already the size of a baseball. Doc felt it pretty good and she didn't moan, yelp or anything while he did it so she's pretty much pain free at the moment. She jumped down from the table that is 4 ft off the floor which bugs the crap out of me but shows she's stable in that area. No sense of doing a MRI as I wouldn't have her operated on at her age and there is a possible chance of the tumor exploding when they cut her open. Her quality of life means more to me. We almost lost her the spring of 2011 right after we moved here due to someone tossing rat poison out and her getting a hold of it. Almost put her into kidney failure even though I got the package away from her and her teeth was only through the cover on top. Law said the package had been coated with grease so everyone was watching out...our landlord had his dog poisoned a couple years ago and they never found who did it...anyways...she's moving slow,her perimeter walks are closer to half the perimeter in the morning and not much during the rest of the day. Her eating is slowing down unless it's people food then she can out eat me. Good thing we scored on bread as that with eggs is her favorite and french fries...She's eating grass at the edge of the garden pretty much every time she does go out. AND she finally didn't look away when I took her picture yesterday. 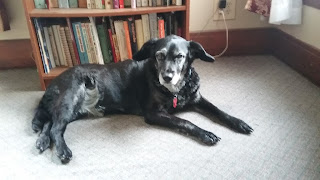 She is getting her way pretty much with what few weeks we have left with her. We know from Cookie that 4-6 wks will pretty much be the end and we won't let her go into pain . She still lays on her tummy so we know when she stops that or we can see the shape of it in her belly like we did Cookie it will be time to let her go... MEANTIME she has scored extra rides in the truck from her Daddy...

on the other hand Rascal... who loves getting his picture taken. 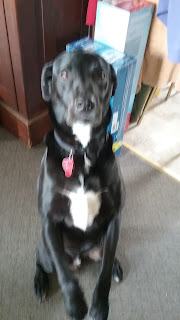 Yes he is begging,that's about as far as he raises his front feet unless he is wanting a hug. He has stayed close to me, he isn't trying to get her to play any more. isn't swiping the chew bone from her to get her to chase him. He is smelling her more instead so I know even though I haven't picked up the odor YET he has.He isn't playing 10 (fetch the ball) with me, just wants to be close but not play. When I walk the perimeter he stays with her most the time now. Protecting the weaker of our pack.

I did the wash on speed wash, tap water cold, homemade soap and then dried everything on the clothes line. She laid in the house on the hassock to watch me out the window (she didn't want out as I left the door open so she could come out whenever she wanted) and he laid under the tree watching her and me.

Hubby told me to feed her whatever she would eat. He didn't want her to feel hungry and she does let me know when she wants something but I think the dog food isn't going to be what she eats much longer. Rascal will definitely eat her share.