We spent $17 at the grocery store, 1 gal of milk, 2 cartons of sour cream, 1 carton of cottage cheese, a 3 pack of colored bell peppers, 1 bunch of celery,1 pack of white mushrooms, and 1 pack of portabella mushrooms. That should last us for two weeks.

We ate from the pantry except for a gas station $10 pizza the night we didn't get home until 7 due to waiting for appts an hour away from us. We have been combining appts so we are making less trips. The last one that day was running an hour behind and then took an hour. SIGH.

Daughter 4 had a company give her some money to help her buy her frig and stove. She passed that money to us to put on that bill. Now it's down to the same as if I have bought the frig on sale. Stove is now "free". Considering her old frig froze her milk, the new one is up and running just in time and she was baking a cheesecake in the new stove.

We decided to Not buy a live tree this year. but use the old little tree we had when we lived in the 800 sq ft rental. I bought a light tree instead 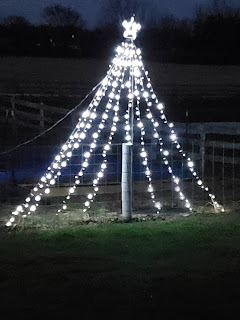 for less money than the live trees would have costs. We buy two, one for front porch and one for inside . I haven't decided how to decorate the deck yet. I should say I haven't found anything in the decorations to put on the deck yet.

The holiday dinner we usually attend for HAM radio was canceled so I did not buy anything for it as it would have been this coming week.

but my soon to be granddaughter asked me what I was thankful for.

I am thankful her and my grandson have one another.

I am thankful that my vein surgery has not been canceled, it is NOT cosmetic.

I am thankful that I was able to hang my laundry including all the Christmas towels, table linen etc out of the yard line.

I am thankful a company stepped in and gave us money to help pay for Daughter 4s stove and frig (which she is going to pay us back for it and all the money we use to support her).She had mentioned us buying it for her while at treatment. It's now down to the same amount of buying her just the frig with is being on sale.

Posted by Chef Owings at 1:56 PM No comments:

I know we are all tired of the covid and politics.  I've had a brother in law, 2 sister in laws, and nephews already go through this. They got off lightly.

I just lost a good friend... his sister tested negative for Covid and so did he. They spent the day together in his apartment as he is disabled.

The next day she had "allergy"coughing, her doctor tested her. She was positive( 2 day turn around on results), She called her brother, he was already in ICU as of that morning. He did not make it. She is in ICU on ventilator. We worry she won't fight it because of his death.

If you continue to have no symptoms, you can be with others after 10 days have passed since you had a positive viral test for COVID-19. Oct 27, 2020

Just because the test is negative does

not mean you do not have it. You canhave it and not had it long enough to test positive or are n

not showing signs of it.

But the infected person doesn't begin producing antibodies immediately. It can take as long as three weeks for a blood antibody test to turn positive.Nov 20, 2020 Harvard edu.

If you have symptoms, there is a 70 per cent the disease will be detected with a positive result, said Cheng, who recently wrote a scientific article summarizing research so far on COVID-19 testing. On average, symptoms develop five to six days after exposure, but it can take two to 14 days.

Son2 said a lot of people including MEDICAL do not realized they have it. He had a soldier in ICU on ventilator because his doctor thought it was bronchitis and did not send him to be tested for covid. YOU will most likely test positive until 5 to 6 day after exposure .My son has been guarantied for 2 wks due to others having it around him. He is NEGATIVE but still staying away most except at work as he has to go to work  and he is now wearing his mask even alone due to the heating system runs the whole building NOT just his office. The ones that were positive around my son, had NO symptoms. , except the one that was told he had bronchitis, which he gets often.

My kids told me they could not live with themselves if I got it because of them and put on oxygen the rest of my life because of it or died. I definitely know I could not handle giving it to my children, grandchildren or great grandchildren...

My grandchild whose wedding for next month is at "we will see"  said her florist who works from her home is now moving it to the garage due to her Hubby's health as he has Parkinson's and the CDC told her that the in home business was putting him at a higher risk even though she requires mask and has hand sanitizer.

Because of covid shedding.

Upon infection, a virus multiplies inside the body, and when that person sneezes, coughs, or (in extreme cases) speaks, it has the potential to be released into the person’s environment. According to WebMD, this occurrence is called viral shedding.

Knowing how viral shedding happens is beneficial in understanding how COVID-19 spreads, and it helps scientists figure out the point when a person with the coronavirus is the most infectious. Researchers reportedly use terms like “low” and “high” to describe levels of viral shedding.

you can shed for up to 20 days on the average.  There was a woman in Washington that did it for 70 days. Makes me wonder if she was what they call a long hauler of covid.

I really looking forward to cookies and candy for the kids and grandkids but worried about spreading germs. Grandsons and daughter working in culinary field said I could do it still, the only change I would have to do is wear a mask.