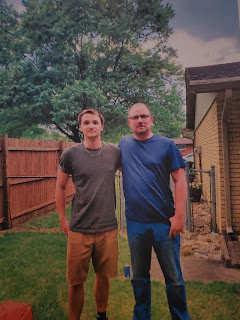 With permission from these two I post this picture. Son 2 is on the right. Grandson S on the left. Grandson started his 1st day in the Army today July 1st.He wants to follow in his uncle's foot steps.
I finished the gardens... mostly. I will be working on an irrigation system for next year. Hubby is looking for a better way to control weeds around the area. He does still have to put the electric fence up around the sweet corn in the south garden . That's about 4 hrs of work. I need to move the red rhubarb. I mentioned moving it up under the grape vine but Hubby really doesn't like that since he would have to do more trimming.
E came over with his boys a bit back and help move the metal frame (was a garage in a box that we lost the cover in a wind storm) to an area south of the barn, gets shade during the summer from the tree on the north west side there but will get light during the winter and the barn it's self will block a good part of the north winter winds. We think we have it set where it will be good, I pulled out the pots I am using and the cover so we can get it on this week.Goal is to be planted by July 15th.
We found some old wood fencing that matches the wood fencing in front of the house. I found a paint scraper in Daddy's stuff that I was going through. I told Hubby I could scrape it and paint it when I paint the posts for the deck railing and we could use it for the railing on the deck instead of wire fencing.  We just need to buy paint with primer which we need anyways for other stuff that needs painted. Something outside always needs painted.
Other projects..
basement ramp, Hubby wants to start on this as he doesn't want to lose that entrance.
kitchen porch after the ramp as the ramp will affect the south end of the porch.
tower for antenna in cubby hole (which means he might finish the weed barrier in that area. I am collecting field stone/rocks to lay in that area to have a rock garden (which Wilbur won't go on and do his business there ). E said to remind him when he plows this fall and I can go to a couple of his fields for rocks. I already did his pasture.
Gravel that is here spread out.
But my first project is to get over food poisoning that I got from my own frig. Neither of us thought about the deep fried onions I reheated was 5 days old not 3... I usually don't eat any leftovers over 2 days old anyways.SIGH. Doc was not happy with me and told me to not be surprised if it takes a month due to my Crohn's to get over it. Mean time every day is a bit better. I actually slept all night last night. I made it through getting my MRI of my knee. I was glad the worse part of the food poisoning was over before that.
I would love to have one of the parts completely cleaned in the barn, the pantry nice and clean and organized and clutter out of the mudroom (which reappears every time Hubby comes through the door carrying something that belongs in the barn that he just walked through and forgot to put it away out there). BUT realistic it is not going to happen this month.
Posted by Chef Owings at 11:09 AM 4 comments: