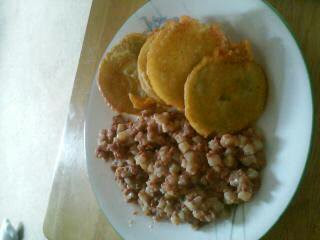 Corned beef hash bought for 70¢ a can. I did cook 3 cans , one for each of us and one for Hubby's lunch, ended up with leftovers for my bfast (love that) and fried green tomatoes from garden. Batter for tomatoes was Whistle Stop Fried Green Tomato batter ( reheated nice in microwave for Hubby and didn't get soggy)that I had bought some where on clearance. AND now am hunting for it  on sale or clearance because it's the favorite batter for all that we batter fry which isn't very often. I have found it at it's own store but still checking other places for it just to make sure it's the best price especially with shipping.

Leftovers have became breakfast and lunch.Appetizers have became dinner when we aren't really hungry for a full meal. We don't eat much soup as it doesn't transport well for Hubby to take to work and he takes leftovers from our dinner for his lunch.We also mixed a lot of leftovers with eggs for meals.

I had my back injections which brought processing tomatoes to a halt while I recovered and then got a flu shot which always brings me down a couple days also.I did get some older tomato juice etc cooked down for BBQ sauce and got that canned while recovering since I didn't have to stand on my feet much and Hubby could stir it for me. While down I sorted through 150 lbs of softball size candy onions for storage.I had to peel about 2/3rd of them to recure as they had drew moisture and would have rotted in storage also about 10 lbs wasn't good for storage, I am dehydrating some of them and will use the rest for fresh. Rather peel a layer or two and recure than toss an onion that went bad. At least with hanging them in panty hose with knot between each, the whole bunch doesn't go bad because of one.

I'm still picking up a few things that go on sale for our Tday dinner. I'm pretty close to just needing perishables and meat.

I am 2 mos ahead of where I usually am for Christmas savings and have started buying stuff for the Christmas candy and baking.

I have offered to help stock the kitchen for my grandson and his family when they get their first place. They stayed with parents (floated back and forth) while granddaughter was expecting but since Greatgrandbaby (LOL) is born they are looking to move out on their own once they have some extra savings up.I will help by using what we have in our own pantry.

I've not been doing any large shopping...mostly a few needed items that combine coupons and sales or milk. Haven't even bought bread as the last 2 loaves had to be pitched due to mold due to how long they sat there. Maybe when we get our 2nd frig back (son bought one finally, we just need to go get it). I'll bake some and we can store it in the frig.

I've started us eating from the pantry mostly....a couple months early for that but decided to go ahead and start it. I need freezer room for hams and turkeys this fall and right now I don't have any room.

Our trailer broke when we hauled our son's car to the mechanics (shifter broke and the mechanic said it was from resting his hand on it),. Our neighbor runs a fabrication shop and was willing to take a look to see if he could fix it for less than $500. He called today and it was less than $200 and ready for pick up. Better than the $1500 trailer we would have to buy to replace it and we use it pretty much weekly.

Propane is paid in full for the coming season. I still have some caulking and sewing to do to help keep that bill down.

Electric hit $120...still last year it was closer to $185. SO not bad with stove heating canners and the dehydrator running daily along with the AC which I usually don't run this much. I do shut it off in the early mornings and open all the windows to air out the house. We are looking forward to this coming weekend as it's suppose to drop almost 20° and we won't be running it at all.

I have been doing the laundry when I can use the clothes line.

Any thoughts of saving?