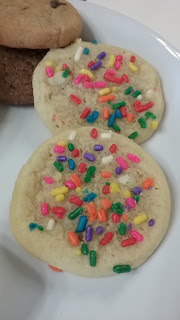 While at my GI appointment an elderly lady pulled several gags on me after she heard my doctor say something about the gag gifts I do for the kids and grandkids. I pulled them on Hubby and he thought they were good also.Inexpensive and very doable for the 3 dozen we make gifts for.

I found a couple gifts at a thrift shop after my GI appt.

We are still working on one large gift that we knew would be time consuming but not expensive.

I bought a strand of lights for the light bulbs as it was cheaper to buy a 100 bulb strand than the replacement bulbs for several of my window decorations.

I have some Christmas cards already bought so I will start signing them and getting them ready to mail around Thanksgiving as I want to include a short note.

Blessed Be
Posted by Chef Owings at 7:57 PM No comments:

We finally made it to Sam's club... saved 6 %. not including how much cheaper compared to other stores for what I bought. 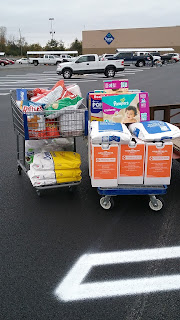 We got some funny looks with having 5 boxes of oil that weighed 35 lbs each. Turkey fryers take a box each and we always buy back up as more than one time had a fryer spring a hole or boil over. YES we have a fire extinguisher always on hand for that reason.

Hubby built a box on the back of our trailer years ago...has had to replace it a couple times but it keeps things from getting wet (like kids' furniture) or blown off (plants from auction). We consider this a "light" run as usually the box is full , the bed of the truck is full and the back seat is full... this time it was not even filling the box on the trailer. Got diapers for the great grandson with $8 off.It will take care of him for a couple months making his parents happy to not be forking out that type of money at the holidays. 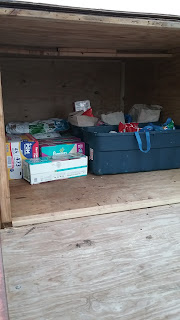 But it has pretty much wrapped up what we needed and a few things that was on the want list except for the items that come on sale in Nov/Dec. I check butter at Walmart... OUCH 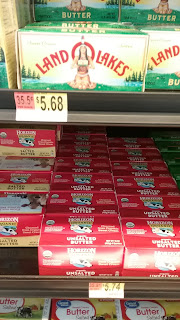 But I lucked out at Aldi's at their grand opening and got it for $1.99. We have enough right now with using powdered butter from Rainy Day Foods for baking and canned butter for the table. I got eggs for 59 ¢ a dozen so I can finish dehydrating the older eggs. I also got another roasting chicken for 95¢/lb. We had it for dinner and it's now in the stock pot so I can debone it tomorrow and toss the bones in the trash as it goes to the road in the morning for pick up.I will end up with 4 meals from it.

Krogers had digital coupon for 4 x points for gift cards. We needed gift cards for Christmas so we picked them up and then I did the survey to get more points for Nov.. We used 20¢/gal for the gas for going to Sam's club and  the other places we stopped at.

We went to Lock 16 steakhouse for a belated birthday dinner for Hubby.We went at lunch time to get the cheaper price. Brought home leftovers to make 2 more meals with adding veggies and a fruit.

We went to Dollar General where I had a $2 coupon off $10. I got cleaner for the swiffer mop that Hubby bought several years ago and he loves using. The cleaner was buy 2 get $1 off, bought 2 cans for the autospray for the kitchen that was a $1 off and a 2 cup glass measuring cup. Total paid was around $12 .

We went passed a house that was between stores that we thought we would be interested in buying. It was surrounded by a woods and not what we were looking for.

I washed foil, food bags, reused tea bags, opened curtains in morning and close late afternoon when there is no sun. Did laundry with homemade laundry soap with vinegar for the softener, used the drying rack for light weight stuff, dried heavy items first so if needed to be rebooted they were with the next load.  I did my surveys for Pinecone and worked daily on Swagbucks.

Hubby used gasbuddy for other gas for the truck, he packed his lunch(always has) from leftovers.Mended another pair of socks that his steel toe boots wear out in that area.His truck went in for both fuel lines to be replaced. Haven't gotten that bill but we already know we can make payments on it. SO blessed with the mechanic we have.

I dried more onions and eggs... worked on some red bell peppers... have the rest of what is in the mudroom to finish. All the tomatoes just finished turning red and I had some of them with the bell peppers as I heard that would help the bell peppers turn. Got a recipe for apple shrub that I have never had.

Hubby mentioned he only had 1 vitamin pill left so I went upstairs and brought down more for him and then decided to make sure all my meds and vitamins were full also. So nice to fill everything up and not have to worry about going back into town and finding coupons and sales to fill those needs.

A co worker of Hubby's gave us a Mc D's gift card that had $5 on it as no one in his family eats there. I saved it for later.

The curtain rod over the kitchen sink kept falling down every time I shut the bottom half of the curtains. Hubby suggested buying a different style rod, I put a clothespin on the end of the rod so it couldn't pull through the hook that holds it. Problem solved for the price of a clothes[in that I've had for years.

My GI who has really helped calm my Crohn's down is not going to be in network starting Jan due to ins changes. She prescribed me enough meds using 90 day supply to go a year so I didn't have to stress about finding a doctor right away as she can do phone consults at no charge to me if I end up in the hospital ER with an attack. She also referred a couple doctors that will be in network that she had worked with before and said she would go to them herself...She has Crohn's so she definitely understands.

I ordered a gift from Dad O for Christmas from Amazon and had them gift wrap it for me as I know I wouldn't be able to and do a decent job of it. Even Hubby thought it was neat when we got it in.

I had saved some older food safe buckets with Gamma seal lids which came in hand when we got home from Sam's club to transfer the 50 lbs of flour and 75 lbs of sugar. That was a $70 savings and not a worry of getting to the store to buy the buckets and put up with the flour and sugar sitting in the kitchen.

We always try to make a trip to town that is for more than one thing. Twice in the past week we had to drive over an hr to appts so I juggled the errand list so we could do at least one thing extra with those appts. This week is almost as busy with appts.

Have a Blessed Week.