Not Frugal but worth the price

Jan 15th... Monday .we had ham (from son 2 in exchange for part of the prime rib we had Christmas Eve) sandwiches and broccoli cheese soup...using up one bag of cheese that we really don't care for but was given. Worked well in the soup. I met my Swagbucks goal PLUS got 100 more for a survey that I did while BORED and didn't want to just surf the web or social media. NOT FRUGAL.. I ordered a skirt and a hoodie from J Peterman catalog...if you are not familar with this company I can tell you the clothes are expensive...some vintage or in the style of vintage. I ran across this company while reading Simple Abundance several years ago and have looked at the catalog for YEARS as I read Simple Abundance each year as a devotional . I saw a skirt and hoodie that I LOVED last year...but thought as a bit too much ...okay A LOT too much for my style of living...but every time I checked the catalog that was what I looked for.. It went on sale for 50% off...My birthday is in a few days...I have my spending money allowence (we give ourselves $50 a month for what ever we want) for Dec-Jan and now Jan - Feb....I have $25 in change saved.... I put in on my credit card ...knowing I HAVE to have it paid off in 3 wks... It was just under $200 with shipping. That's not frugal SIGH. Hubby said if I wear it like I have my winter coat ( 10 years )and my little black dress(now 30 plus years ) My demin skirt (20 plus years) then it's not a bad buy.Since I just got rid of the hoodie I wore when the Daughter 1 was in Jr high (she's 46 this year) I think I can wear both long enough to not regret the money spent.

Jan16th  Tuesday .Having leftover ham slices, mashed potato patties from leftover mashed potatoes , green beans from pantry and biscuits. I woke up cold this morning due to Wilbur 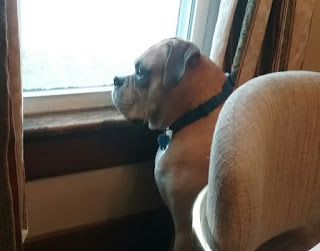 He must have gotten cold through the night and took ALL the blankets on the bed to make himself a bed. I woke up with a flannel sheet and Charlotte curled into me trying to stay warm herself. Thankfully since I am not willing to fight a boxer (LOL) over blankets I had a couple fleece throw blankets at the top and covered Charlotte and myself up.  Back is definitely not happy with having been cold through the night.

Jan 17th..Wednesday.We spent the afternoon measuring the rooms at the new house (209 is what we call it as it is on township road 209) , Ate lunch at Arby's over by the house since I didn't plan to be there nor had anything to pack to eat before or after being there. Thankful for the Amish family that allowed us to come in (didn't have to because closing isn't until March) and our realtor that took her lunch time to let us in.We had scalloped potatoes and ham casserole for dinner using the last of the ham.

Jan 18th... Thursday. My 59th birthday. Hubby asked what I wanted to do and I chose to go see my Daddy. Best birthday present ever was/is having Daddy as my dad and I made sure he knew I felt truely blessed for having him. Hubby bought 3 -4 piece chicken dinners from the local restaurant for dinner so I wasn't cooking as Daughter 2 didn't get in until 11 after her youngest ball game.

Jan 19th ... Friday, I caught a charge on bank account that shouldn't be there .. a bank fee so the bank told us to come in on Monday so we can sit down as they know what triggered it...Hubby only gets "paid" once a month instead of weekly and software didn't regisiter that he had more than enough to go in to NOT have that fee...they also think they have a better account for fit our needs. Daughter 2 vacuumed the house, I swept the bathroom and kitchen and Hubby did the dishes. Daughter 2 also did our laundry when she did her own so I could focus on starting to put the binders together for working on 209. We had summer sausage /pepperoni , cheese and crackers for lunch and leftovers for dinner.

Jan 20th... Saturday. Daugher 2 straightened up the frig (she has OCD so I ignore it when she straightens something as I have seen her pick up dog toys and put them in order of size where I toss the toys) and then since her boys were all at friends or doing something with their stepbrothers she went to have a PJ party at a girlfriends house... She borrowed a few DVDs and took some creamcheese with dried Italian salad dressing and crackers. She will roll the creamcheese in the dry dressing. Plus she took some yogurt and Grapenuts to make parfaits for breakfast. All what we had here. Hubby and I worked on drawling plans, making lists and starting 2 sets of project plan binders..one for the house the other for here. We ate leftovers and basically snacked. 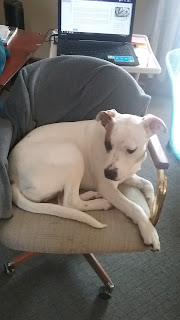 went out this morning and got mud(and cow poop) from her chin to her tail. Looked like she laid in it, might have crawled under the gate but what a mess. She got a bath...not thrilled but at least it wasn't a fight to keep her in the tub. Tub got sanitized and I then got a bath and everything got washed. Frugal part was I had kept the oatmeal soap I used on Miss Kira so I didn't use blue Dawn which is what I use on Rascal.

We had friends as us to meet them for dinner at Hong Kong today, but Son 2 wanted to go also and wanted it to be for lunch since he is furloughed and that was the cheaper meal. They were willing  so we are going for lunch instead. I have a coupon that we were going to use for us and decided to let Son 2 use instead. We will have bacon Sandwiches for dinner tonight.

I haven't done any grocery shopping this week.

Blessed Be
Posted by Chef Owings at 8:43 AM 2 comments: