SIGH I miss you Daddy 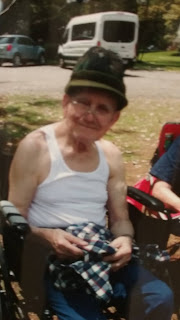 He would have been 94 years old on Monday. He was 93 years old in this picture. Right before he got pneumonia which ended up being his cause of death.

Yesterday (Tuesday) Brother brought out a stack of papers of 25 and a copy of the death certificate. Scared the crap out of me as he CALLED instead of texting. Which he only calls when it's bad. He has never been here even though we have repeatedly told him and his family they are welcome and we are not welcome at their home. Mother would "punish" him even as an adult if he had anything to do with me. If he mentioned I was at Daddy's when he stopped in that was okay. So we are like to only children but have a sibling. Sad even though she's been gone 10 yrs he still is that way.

He had gotten papers from an life insurance policy that no one knew Daddy had on Monday... hard day for both of us . So he brought out what was for me to fill out and he got the copy of Daddy's death certificate so I wouldn't have to make a trip to the court house that he was driving right by to come here (savings of $5 for me and he didn't want the money back),

He said he talked to his lawyer and has now given his lawyer a list of life ins policies, a copy of such policies and a list of where his investments are so if both him and his wife die, or she isn't well enough (has really bad health problems for last 20 yrs and then long hauler for covid) the kids don't get hit with this kind of stuff popping up as this is the second time a policy has popped up that we didn't know about. The one we did know about he cashed out to pay for his funeral when he made the arrangements when Mother died so we wouldn't have to go through that HADES again. Nothing like writing your parent's obit on Thanksgiving.

I will be making copies of ours to take to our lawyer when we update the will this year.

He stayed for 5 hours. With him "snapping" at me one time because I repeated what he said and he said he didn't say that.  Wanted to take a different way home, likes to drive and see the countryside we get that from Daddy. Hubby gave him a different route and wrote it out for him and then input it to his GPS on his phone for him as Brother is not all that great doing that.

After he left , I mentioned I might want to check with doc about my short term memory. Hubby said NO, your brother has Dementia and hasn't accepted it yet. He had said what I repeated to him. Hubby texted niece to tell her what happened because he got "snippy" with me and she said he was getting worse since he had covid( real bad  and got the "drip" (Same stuff as Trump got). That her brother (from her mom's first marriage) was checking in on the two of them in the mornings before he went to work, her uncles and one cousin during the afternoon and she was still living at home (actually they put her name on the house and her brother's name on the other house to ease that issue). Said right now he is still okay to drive, even has worked some short term jobs off and on. She has been keeping in touch with Son 2 (who didn't mention it due to overload of changing job and trying to train his replacement etc) as she felt she could use the wisdom of Son 2 to help guide her since he is the one to deal with us.  And she didn't want to "add" stress to me when I can't do anything about it.

I am happy she felt comfortable with Son 2 (she is my grandkids age ) to reach out to him for support..

Now I have 25 pages to deal with for this insurance. I am glad Niece volunteered she sat down with Brother to fill his out with the line she wanted to know how to do it when he or her mother died. Since he retired from teaching after 40 some years, getting him to "teach" you is a way to guide him she said.  She added that most the information they are asking for is already in the paperwork as she added that page for me. I just got to find the page in her handwriting LOL.