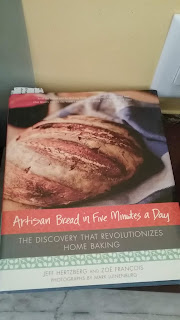 We used it for awhile and then I stopped baking bread as Hubby isn't a sandwich eater nor does he want bread at every meal. At that time I had a very small deep freezer and didn't have room to freeze bread dough. I have room now 😏. 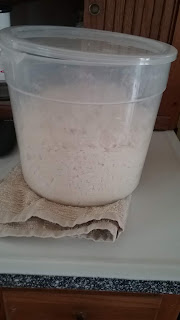 SO after I made the tortillas, I flipped through the book and decided to do the master bread recipe. Next one will be the one with buttermilk.
It's not hard to toss together, no kneading at all. 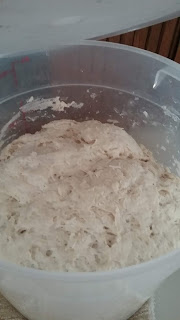 It's about ready to put in the frig until tomorrow. This should make 4-1 lb breads. It will hold in the frig about 2 wks.
Posted by Chef Owings at 3:24 PM No comments:

I used a traditional recipe from a friend with lard and no baking powder but I did add Easy Roll Dough Improver from King Arthur Flour. 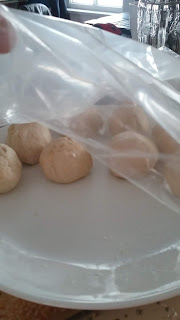 Making the dough was easy, flour, lard, salt and water along with the Easy Roll Dough Improver. You can let it rest 30 min before cutting and rolling into balls but I didn't. Rolled it in balls, covered it with plastic (bread bag) and let it rest 30 min. 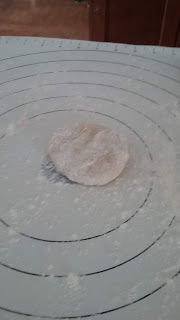 I used my pie crust mat. I do need to pick up a new pastry brush to brush flour off as my silicon brush didn't do as good as job as I wanted to get the extra flour off. I rolled it thin enough I could see the lines under it. Pioneer Woman does the same. 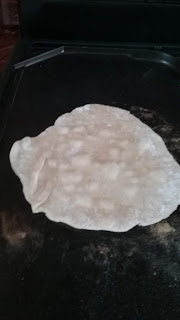 I ended up moving my griddle over to a hotter burner than the griddle burner as it wasn't getting the griddle hot enough. This is the first side down. 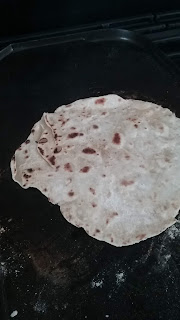 Maybe not even a minute later, I rolled the next one out while these cooked and it's was maybe 2 rolls on the one I was rolling out before I had to flip the one cooking or take it off. You want dark brown not light brown or burnt (yep got a few with burnt).

I had towel laying on a pan to lay them on as they came off the griddle (cast iron pan would work or a heavy dark pan, not nonstick) and then covered with  another towel. When they cooled they went on a plate and back inside the bread bag and put in frig. These can NOT be kept on the counter as there are NO preservatives like store bought. They can be reheated in microwave or oven (wrap in foil), they can be stored in frig or frozen. 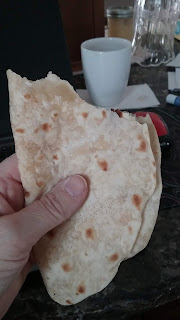 Considering I ate 2 with nothing in them and I sure wouldn't do that with store bought... YUM