Okay... Tuesday I did laundry and hung on kitchen porch line. I washed the curtains, shower curtains, bath mat of the wheelchair bathroom and shined the window and mirror. I washed the inside of the front room windows, took down summer sheers and curtains, washed them . Bathroom and front stuff went to yard line. I hung winter curtains in both rooms. I cooked the last of the 3lbs of hamburger and make taco meat. Divided by 3, put 2 in freezers for later and had tacos and tortilla chips with salsa for supper. I canned 8 pints of diced green tomato(first for doing this).

Hubby did his last haul for the produce auction and picked up a load for Friday to deliver pipe for fencing. He finished the field tile.

Wednesday... it's 11:30 and I am waiting for the second canner of diced green tomatoes to finish and then it's off to the gardens. Laundry is on the kitchen porch line and the dishwasher that didn't get ran last night is now running and I can reload when I come back in. I will check the dehydrators while waiting for the canner.

Wednesday after supper. Hubby flex sealed the basement casement windows. He covered the crawl space vents to keep the cold from going across the heater vents. He put away the garden hoses, did a fly bomb in the pump house (said there wasn't many but did it anyways), he covered the AC.

I reloaded dehydrators with more greens. Put laundry away. Set today's canning aside so I can check it tonight and again tomorrow. Cleared 40 of the 104 tomato plant. Was going to try to get half done but my back decide it had enough and I couldn't bend over. Guess that is better than not being able to straighten up or stand up.

Hubby had elbow mac with chili over it. I had it with butter and mushrooms.

And we have called it a day.

OH wait. Daughter 4 said during her check up (and weekly covid test) they did another ultra sound and her doctor is checking with another doctor about instead of doing a port and Radiation ... they might do IV with radiation. Less chance of her getting infection and there is a slim chance of doing External radiation... For her sake I hope the external.

My back is a bit cranky, Hubby suggested I wait another day before going back to the gardens for tomatoes. Work at winter curtains and dealing with what I have to process already in the house.

We need chili in the pantry... so that has to go on the list.

Daughter 2 gave me 2 cases of chili I had made her (her money and my time)she found when she moved that are too old to eat(five yrs to be exact). They were still in the boxes and she thought the boys had finished them, the boys didn't realize the chili was in the boxes and thought it was gone. SIGH. Said now she takes everything out of the boxes and puts the boxes in the garage to put empty jars back into. Lesson learned. Her man cooks so he is now making chili this week. She's the "Box and can" cook in the family.

Hubby started the morning (after coffee) turning the gas generator on and running the house on it as the "test" for this year. He will let it run low on fuel before turning it off to keep the fuel fresh during the season. He burnt another stoop. Cleaned out the purple martin bird house and covered it for the winter. He also cleaned out the other small two on the north side of the house the sparrows use. The only one left to clean is the wren house that is getting moved to the garden as that's were I found the nest. I don't think they like the dogs being that close.  He also moved more gravel around for the trailers to sit on instead of their back wheels sitting in dirt.

I put away summer dress clothes and brought down some sweaters and long skirts to wear. I have no closets in this home.  I use a pipe Hubby put up that will hold 7 hangers of clothes. The rest of my hanging clothes is on 2 clothes racks in the south loft. Hubby has 3 wardrobes for his hanging clothes, either in the wheelchair bath or right at that bathroom door. 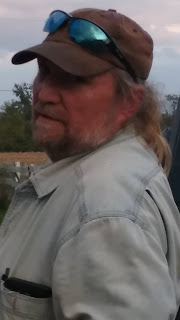 My favorite photo of him. Today  is his 62nd birthday. He is hauling pipe for fencing for the Amish. E is with him. M sent over caramel iced cinnamon rolls last night as she knew today was his birthday and it's his favorite that she makes. I told Hubby since we decided against going to Lock 16 for his birthday (we have a bridal shower and wedding coming up in Nov and Dec) He could decide what fast food he wanted to have for supper and I would order it, pay for it and go get it. He laughed as he knows I hate talking on the phone. I'm okay with paying or getting it.

We spent a quiet morning until almost noon since he wasn't hauling produce to the auction and talked about his personal goals for this coming year. It's something we do on our birthdays. He decided that he wants to lose twelve pounds, practice his welding this winter (he used to weld all the time at the factory) and depending on the pandemic go deep sea fishing next  year with his buddy.

Then he went off to haul pipe.

I have did the finances for the last part of the month. Checked his business finances so he didn't have to. Did the regular laundry, then started washing bedding, dog beds and furniture throws since it is a great day for that type of stuff. Ironed dining room curtains and marked where the button holes will go as these will be hanging with shower curtain hooks at request of Hubby. Actual sewing will be on a rainy day. Cleaned the iron.  I ordered my Humira, making sure they were sending it to CVS and not my home. Aired out the bed pillows. Checked Facebook, emails and here. Checked on ALL the kids and a few of the grandkids that was dealing with crap due to pandemic.  Swatted stink bugs and spiders more than a dozen times that seem to come in every time I open the door. I've ignored the 2 dozen spam phone calls but it takes my time to go check the phone...will be thankful when the election is over.

He chose Philly steak subs , I added a side salad for me. He was definitely on the dirty side and was thankful E went with him as they had to hand lift all 350 pipe over a 4 ft high rail off the semi. The pipe weighed 150 lbs each. DOG TIRED.

We called it an early night.

Leftovers are being ate today since there is enough of them instead of me cooking something else.

Hubby off hauling hay. I have the second load of laundry going as I had to wash what he wore yesterday separate as they were that filthy.

My morning jobs are, laundry, unloading the dishwasher and reloading the odds and ends,  clearing both emails, checking Facebook, checking here, vacuum packing frozen hamburger patties and frozen green tomato slices.  Updating our health insurance elections for next year.  THEN going to the gardens after that is done.  Be back later.

I finished harvesting the last 8 bags of potatoes. I won't be growing potatoes next year. Take up way too much space for the little bit we get. I can buy the from the Amish or the Mennonite bulk store for less than what it costs me to plant them. I've tried 2 yrs now. This ground isn't good enough >>YET.

I cleared 1 1/2 boxes of tomatoes before calling it a day.

Daughter 4 called to tell me I have been hacked on FB. I have yet to figure out how someone in Chicago can hack my acct without my password.

I rewrote our to do list as there was so much marked off that we couldn't figure out what was needing to be done.  Hubby did paperwork for the business. I in with Daughter 4 to make sure she is staying on track with her budget. Her son was there visiting and he double checked what she was doing. All 3 of her kids are doing what they can for her.

I wrote out the menu for dinner for the coming week. Hubby and I don't eat bfast very often and we  eat different times for lunch. Most time's he is walking out the door before dawn and doesn't come home for lunch . Since he doesn't do eat and drive, he might grab a couple granola bars or trail mix he makes for himself to eat while waiting to be loaded or unloaded.

Monday :Beef roast (saving some meat and broth for noodles in a couple weeks) with carrots, red onions and white potatoes. Will have pickles and peaches also

Thursday: Leftover pot pie and salad as we will be going to appts and the grocery store for the major stock for this month.