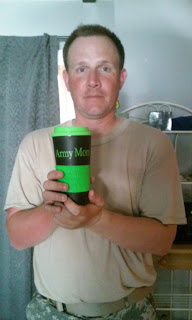 16 yrs so far of being an Army mom for a child that was looking to be a minister when 9-11 happened.Son2 works both sides... military and civilian and was a class  for the civilian side.So I got to babysit my 4 legged grandkids and thought Mini vacation. 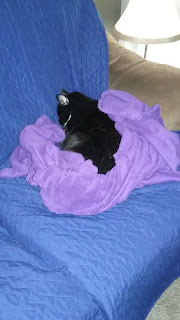 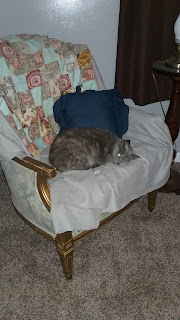 Black one is Cuddles and he does like to cuddle with you and blankets. Gray one is Bailey, she is timid for a bit when I am first around and then likes to play with my hair.

Son2 saved over $500 not having to hire a petsitter. I also cleaned his glass stove top that he had burnt noodles on and couldn't get off, cleaned the oven and his kitchen sink he was having troubles getting clean (baking soda works wonders). Replaced his halogen lights with LED(on sale and 11% rebate at Menards).Measured his sink so he can get a replacement(he wants a 2 bowl instead of one).Fixed 3 dining room chairs and removed several empty boxes to my car so I can take them home. He has to pay extra to have them picked up in trash and they don't have recycling in this area and I can use them for packing or break them down to take to our recycling for free. I also started stripping his china cupboard (was my mother's) but realized the stain was different stains, some looked like paint and the shelf I did get stripped doesn't match the door I got stripped.Hubby will be picking it up later this month and bringing it home for me to work on there.It's going to be time consuming. ... and I went home to get some REST LOL.


Hubby got to stay home with our 4 legged kids. He said bedtime was the same even though I wasn't there , they went to bed on their own  at 8 p.m. 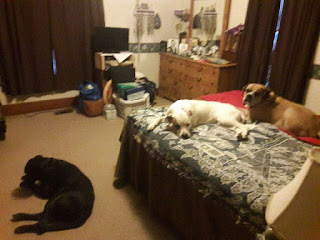 Wilbur brown,  Charlotte white, Rascal black. Rascal some times gets up and sleeps on the pillow beside me but pretty much has always preferred the floor since he can see out the door .

AND then Hubby had to deal with this 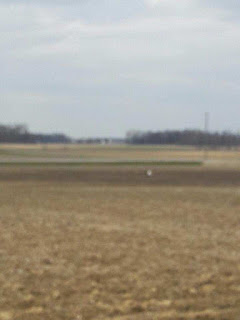 My first thought when he sent it was "what is he taking a picture of and that's 1/4th of a mile from us"
Well the white spot is Charlotte and Rascal was with her but he blended in with the dirt .... Hubby had to call them 4 times (which is unusual as it's usually just once and they will come for him, I'm the call 4 times and threaten to get Daddy). He let them out the back door and saw them hauling butt to the front of the house so went to look out the front bedroom window and saw this.... probably a flock of birds was in front of the house. THEN the landlord's son took the skidloader down the road and Charlotte took off after him barking... she isn't much of a barker let alone doesn't usually chase anything that is that far from the house. Needless to say the rest of the day Hubby had her on a leash which meant he had to go out with her every single time. She didn't take off again when the next day he let her out without the leash. He said he didn't want to put the shock collar on her because he isn't familar with it. He has pretty much taken them every where he went while I was gone.I just laughed because he complains about taking them when I put them in the truck when we go. Gets warm this summer they won't get to go much anyways. Hot truck and pets don't go together.

Neither of us bought any groceries except me picking up milk on the way home. Hubby ate from the pantry and a sandwich from Windy's when he was out at lunch time over at 209 and didn't think to stop at the local store that serves lunch specials ...we got this one Monday and I got mac and cheese, he got potato salad as sides and then we split them between us,$4.99.. we ended up having a whole sandwich left between us for dinner that night. 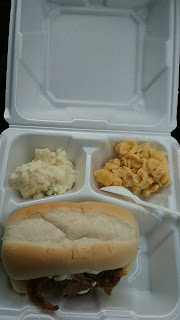 I took food with me as Son2 does a lot of nurtrisystem and low fat stuff.... I did get Chinese from the local restaurant as take out, the lady set up the order as a lunch order combo to give me a price break as I ordered extra crab ragoon and fried dumplings(AKA potstickers) to go with the chicken broccoli(brown sauce) with white rice and eggdrop soup. I did this the day before I went home so I could take the left overs home, add rice and eggrolls and have enough to feed us again. 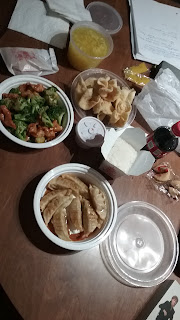 We have been going over to see Daddy on Monday mornings,  then 209 after lunch...This coming Monday it will be 209 first to go over the changes with the electric, then lunch and then Daddy and possible Hubby's parents before we go back home. No the dogs won't be going with us. I will try to have enough packed to fill the truck so we aren't"wasting" a trip and not taking anything with. Each load that goes now is 1 load that we won't be taking later.

Blessed Be
Posted by Chef Owings at 8:36 AM 2 comments: