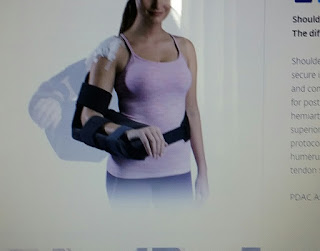 Yesterday I spent the afternoon in town getting fitted for my sling which looks like this. There is a huge wedge of foam between the arm and the body. The lady had told me I had a $44 copay...hum... I politely told her she needed to call my ins and confirm that because as of 2 wks ago my deductible and copays had been met and I was what Hubby's employer considers catastrophic and they pay 100%. She really didn't want to take the time, wanted me to pay it and then wait for a refund. Very polite but I politely insisted she call them and I would come back to get the sling after I went grocery shopping. She called me 30 min later and confirmed what I told her. Kept apologizing and then one of the other ladies that knows me told it that the young lady had got nailed the week before because someone told her their copay was at zero and she didn't confirm it and let them have the sling when in reality they were suppose to pay over $500 for it. Lucky for the young lady that they were able to get ahold of the spouse and the spouse came in and paid it or it would have came out of the young lady's paycheck. I told her that she needed to confirm the day before what the copay is because with our ins it can change in one day.  I didn't have a problem with her wanting the copay but I know that it would take me MONTHS to get that money back since they can't give me credit for it as all medical bills are paid in full from the ins as of now. After fitting me she put it in a case and zip tied it shut. If the hospital feels that it is over kill and I don't need that, we are to return it to the doctor's office as ins won't pay for it if we don't use it...it's $2500...talk about prices running wild.

Since I was in town and I had the grocery money on me with plans to stop after the appt at Krogers for the sales. I went to Aldi's had picked up this month's part of the "stock" up items.Scored as 4 of the veggies I was picking up was down to less than 50¢ a can.. We need 97 items restocked, that's 97 variety not 97 total... more like cases.I got 11 yesterday off the list. I usually restock Aug through Nov but I am not sure how I will be doing after surgery and during physical therapy. I've been warned I should  have someone take me the first week because I will be crying when I leave therapy from how bad it hurts.

I stopped at Krogers and got the sales. Came home and picked a few veggies out of the gardens.

Have my list of MUST DO BEFORE SURGERY for today and ready to get started.