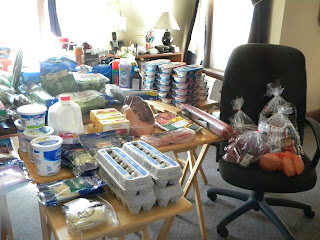 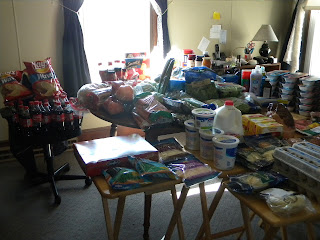 Snow, sleet , freezing rain with a few days of warm and sunny teases in between. Yep, Ohio in the Spring.

Top it with an acute flair up on my Crohn's which now I am on meds for. Low dosage and 2 out of the 3 are just as needed.

Since I was stuck in side and down with Crohn's I decided to figure out if we could cut the grocery bill. It had did a crawl up to twice the amount budgeted. I first thought, high prices of everything, too much impulse buys and I need to eat healthier.(Sorry doc not going Vegan, I am a cheese hound). Did some research on the internet, pulled some things I did when I was a widow raising 3 and feed half the county with their friends and raided the library on a "I can barely stand but I need out of this house"cabin fever day.

The picture are $327 of groceries (which leaves $23 for milk/bread etc for the rest of the month). That actually puts us almost half of the original budget amount.The only thing not showing is the 12 rolls of toilet paper. The packaged food to the left of the chair is 22 shelf stable microwave meals for Operation Thank You to send to deployed troops that had their chow halls shut down. I spent $27 and saved $32 on them and yes, they came out of the food budget.

The stick of deli pepperoni will last about 3 months. The ham is for Easter so it will help through next month.I have a meat slicer so I do my own slicing. I plan to get a meat grinder for my Kitchen Aid mixer and start grinding my own beef.

Everything was put prepped and put away with in an hour.Which surprised Hubby but I have a system and I keep my foods in the same place (or do until he moves them) in the frig.

The next day after dreams of not running to the store every week and having a good solid base for many meals...I woke up to my Crohn's. So for the past 10 days I've been telling Hubby what there is for him to eat that he doesn't really have to cook, just reheat or I reheated it for him if possible. He didn't have to buy anything out or go to the store and that made him happy.By the beginning of last weekend I was no longer able to eat, by Sunday I was no longer able to hold fluids down. Monday morning Doc with much regret gave me my first meds for Crohn's. Now I am home trying to replace fluids and get my energy back.I am not in full remission but things are down to a low roar, which is not what I can say for the wind I have been listening to for the last 3 days.

I have a mountain of things on my to do list but they will have to sit and wait until I have fully recovered. Already learned the lesson of not resting when I should.