When you read things like this
https://www.forbes.com/sites/investor/2020/07/16/stock-market-crash-2020-welcome-to-the-end-game/#253abe5b5782
and this
https://www.bbc.com/news/business-53407965  Big US banks set aside $28 bn in downturn warning.
I know there are areas of over 30% unemployment in our country. I know some that are unemployed are not longer being counted as they didn't qualify for it.SO I am willing to bet it's a lot higher.
I know that some banks are quietly closing credit cards and or lowering the amount you can charge. It's in the news and a couple friends already went through this.
I just read where Wells Fargo put some clients in forbearance of their mortgages without consent from the client and then reported it to the credit score companies... against the CARE act. https://www.nbcnews.com/business/personal-finance/more-wells-fargo-customers-say-bank-decided-pause-their-mortgage-n1234610
I understand the limits of things we having be dealing with... but when I walked into Mendards yesterday to get the household filters and cleaning products AND SHELVES are empty in a place that hasn't been empty in the first part of this pandemic. AND limits of disinfection products down to ONE per person. It was, a stop and think about this.
Hubby and I had already talked between trying to buy stuff as needed or stocking now (I usually start in Aug.) 6 months. We decided to stock for a full year. Money will be tight if the business doesn't stay stable (right now he is hauling farm equipment crops... animals). Taking the hit now financially, cutting other places as we see the prices going up, and inventory going down.
He asked for a list of what was needed to bring us up to a year's supply of everything except perishables. Six notebook sheets later with 2 having stuff on the back side... we sat down and went over it. I separated it out by over the counter medical, dogs medical, non food, household filters,booze , yes booze,extra for the cordial I will be making, food(evaporated and condensed milk etc , things I normally stock in the fall) and the veggies we don't have in the freezer.
Yes, I know how much of anything my home takes to run a year. I have tracked it for years. There as some differences in this home and during this pandemic I am using disinfectants not just cleaners. White vinegar does not touch this virus and bleach triggers problems with breathing (can't even be in the house when using it in the laundry)Lysol does, Mr Clean does, I have to watch what I use due to asthma and allergies.
https://www.epa.gov/pesticide-registration/list-n-disinfectants-use-against-sars-cov-2-covid-19.
Before my doctor appt about the MRI results of my knee (bad news articular cartage broke, good news the break is over 30 yrs old so no surgery, bad news it's catching when my knee is bent at a certain degree and my cerebral palsy doesn't let me catch my balance fast enough when it happens, good news back to cerebral palsy physical therapy AT HOME.) I stopped at Menards and used the last of our rebates. After my appt. I stopped at CVS in Sidney as it has a better selection of medical than here in Kenton. Then I went to Kroger's as that's the state liquor store and soda pop, club soda and hard cider for Hubby.
Then I went to our favorite pizza place and got a 16 inch take and bake and chef salad for dinner ...it's will make 2 dinners actually.
Hubby has been putting off getting new boots even though he needs them. I told him he had to get them now.
We took a hard hit during the storm that went through a couple days ago.... I probably would handle it better if we had gotten a decent rain instead of the .03 inch we got. 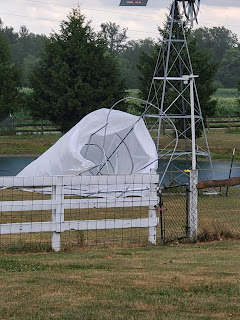 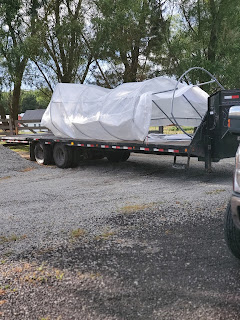 Hoop house that was going to be for fall and winter planting got ripped out of the ground , floated as a parachute (E saw it go and decided he should just keep himself and his boys in the equipment shed for a bit as hoop house was at the back of our barn he had a good view of it coming up), ended at the pond over 400 ft from where it was. The only thing that stopped in from going in the pond is the metal bar on the end hooked to the metal fence post for barb wire (keep horse out of the windmill) at the windmill. We were all thankful the horses were not in that pasture. Under deductible of our farm ins even adding to what got taken the last storm. Hubby looked to see if we ordered new how long it would take.. on back order until after end of Nov.  Metal frame completely destroyed. Plastic has a few hole that can be patched with screen and flex seal.I told Hubby to let it dry out and then we would fold it up and store it. I would work on a design over the winter  to build something next spring. Compare prices of ordering a new frame which might not work with the cover we got or building it.I might have enough scrap lumber to build with.
Are you reading/listening to the news or stocking for another down turn?
Posted by Chef Owings at 8:43 AM 13 comments: