this is the recipe for the bread I made when the kids were growing up.

some notes to be added to it,

lukewarm is close to the temperature of the inside of your wrist.

it says shortening but in this house that can be anything from lard,bacon grease,butter or crisco(few and far between)

I've lowered the sugar to 1/4 cup or even switched it to splenda using their guidelines but I wouldn't go less than 1/4 cup.

flour...I use bread flour for a heavier loaf(filled the bottomless pits up better) to all-purpose flour (for hubby and me). I've also used less than 7 cups to make the dough and a few times more than 8. Flour depends on moisture in the air etc when it comes to amounts you will add.

figure 10 minutes for kneading and I have used a rolling pin to "beat" the dough instead of just kneading it.

you can freeze this dough when you get it to the point of putting it in the pan to raise. Just shove it in the freezer in loaves.When you are ready for it, thaw in greased loaf pan and let rise then bake as you would if it hadn't been frozen.

1 TABLESPOON OF YEAST (OR 1 PACKAGE)

IN A MEASURING CUP, DISSOLVE YEAST AND TEASPOON OF SUGAR INTO ½ CUP WATER, LET IT REST 5 MINUTES.

IN A LARGE CONTAINER, MIX THE 2 CUPS OF WATER WITH THE SALT, 1/3 CUP SUGAR AND SHORTENING.

KNEAD UNTIL SMOOTH AND ELASTIC.

PLACE INTO GREASED BOWL (CONTAINER), COVER AND SET IN WARM PLACE (OUT OF DRAFTS) TO RISE UNTIL DOUBLE.

PUNCH DOWN AND FLIP OVER.

It's Wednesday. This is the day I try to take time for myself...you know the woman...no not the wife, the mother, the daughter, the friend ,the employer, the employee or what ever...time for the woman, me, myself and I.

OF COURSE I still have to do the laundry, cook the dinner, do my work (which isn't making a dime at the moment)wheither or not the "woman" is screaming for chinese take out or dinner at a real Italian restuarant, a new pleasure romantic book she hasn't read fifty million times already, a manicure and pedicure that she isn't giving to herself, flowers, candles and old soft rock music. Just naming a few there.

I want to curl in bed with junk food, good movies and a good book( so much for that because I have to wear 2 different pairs of glasses to do that)

I want to soak in a BIG bathtub that doesn't have doors on the tub.

why does that remind me of a whiney child??? LOL

so instead since I will be at the computer for most of the day. I decided to use the laptop. I can move it around the house and at least sit in the sun and pretend it is warm out.

So do something for your self that will make you smile today...have a ME DAY

Blessed Be
Posted by Chef Owings at 11:49 AM No comments: 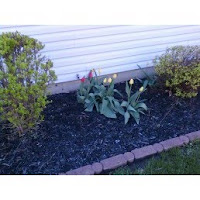 Spring has sprung and right along with it the pollen. But still I can look at the blooms of flowers and know that with in a few weeks I will be planting containers of veggies

tax day will be here in a couple days.We had to file for an extension as a few pieces of important papers didn't get to us since we moved.I guess calling and telling them your new addy doesn't count as changing the address.

SO in that process knowing that we are going to be owing big time for the first time ever(I am not worried since pop already had to go this route and can hold our hands) and add on top of it other debts from our medical proceedures required by our ins but not paid in full for ( I think if it's required it should be pd for in full and not by my health fund) and back debt on the house we lost in foreclosure.Sore subject and not one I am getting into today.

money is going to be very tight.We don't qualify for bankruptcy under the new rules in OH and I am not really wanting to do a chapter 13 slow pay BUT I have pulled their figures for the budget they put you on to live on for the Ch 13.

I plan on Hubby working 40 hrs, he would be one of the last to be laid off if the plant shut down and he has a month's worth of vacation we can use for cash instead of time off if needed.BUt I am not working. Between clients moving, economy and my heart failure, work is pretty much not there.

Some areas we are doing great in, others I just wonder where the figures came from and then others I wonder where in the world I went to.

A few weeks ago I inventoried all the freezers( got rid of one deep freezer) and condensed down any thing that there was two of in the refrigerators( we have 2 and the landlord has one).When I get back to the house( I am out of state for 3 wks) I will inventory the pantry.I plan to use everything up and start fresh with the new harvest that will be coming in this summer.

It's going to be an interesting couple of yrs in my kitchen.

go out and enjoy the weather,

Blessed Be
Posted by Chef Owings at 10:33 AM No comments:

In A CENTURY TURNS Dr.William Bennett, using his skills as an author, historian and educator has given a breath of life to the shaping history of 1988 with George H.W. Bush to 2008 to the election of Barack Obama. A CENTURY TURNS shows just how far we have traveled in the last 20 yrs.

Where and who we are stands on where and who we were and it gives us the bases of where we go and who we become. History is that bases BUT most times it is as dry as dust and boring to those of us that aren’t historians and history teachers like my own brother. Stating that, A CENTURY TURNS is a breath of life in history. Dr. Bennett’s personal thoughts, feelings and memories combined with the facts of the times were a joy to read.

I wished I had A CENTURY TURNS available when I was in school and again when I was home schooling my own children. I’ll be buying a copy for my brother for his birthday.
Disclosure of Material Connection: I received this book free from Thomas Nelson Publishers as part of their BookSneeze.com <http://BookSneeze.com> book review bloggers program. I was not required to write a positive review. The opinions I have expressed are my own. I am disclosing this in accordance with the Federal Trade Commission’s 16 CFR, Part 255 <http://www.access.gpo.gov/nara/cfr/waisidx_03/16cfr255_03.html> : “Guides Concerning the Use of Endorsements and Testimonials in Advertising.”

Posted by Chef Owings at 2:30 PM No comments:

rain on the way and today's meals

Rain is coming YEAHHHHHH.It will knock down some of the pollen and I won't have to shower and change clothes every time I've been outside for any length of time.I actually had a green cast to my hair yesterday from the pollen...yuck.

today for lunch I am having homemade beef and vegetable soup that I brought with me along with a ham sandwich. Tonight though I will be cooking chicken breasts,whole grain medley and asparagus. Not sure what spices I will use on the chicken since I have a really good selection on my herbs and spices with me.What ever it will be throwed in an electric skillet to cook.I have enough chicken to make 2-3 meals total. I'll marinate some of them with Italian salad dressing and cook them in the crock pot tomorrow. If any isn't eaten then they will go into wraps. pitas or on salads.

Have a blessed day, stay safe

Blessed be
Posted by Chef Owings at 10:37 AM No comments:

when you over load yourself ( or the boss does) with things that have a deadline.

At the moment I can take a breath...maybe two...oops overload is right there again.

Sitting in GA in a motel room, looking at my nice red car that appears green now that it is covered with pollen...YUCK

I am looking at attending 2 wedding receptions, 2 baby showers and 1 wedding anniversary with talk of an engagement party with in the next 3 wks right along with my deadline for the revision of my fiction book and my reveiw that is due for another book.

Dinner still must be served as none of us is rich nor do we prefer eating out anyways.

SO tonight is smoked sausage. kraut and leftover mashed potatoes I brought with me. Canteloupe for dessert, maybe some cheese and crackers for an appetizer, depends on how hungry we are.Simple, quick and not drive thru food.

Blessed be
Posted by Chef Owings at 1:02 PM 1 comment: