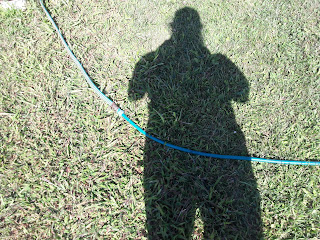 Hubby really doesn't know if he meant to take a picture of his shadow or if he meant to take a picture of the hose...I think he meant to check his phone for the time because he just turned on the water for the garden and we switch the controls in an hour to water the other gardens... Frugal to time water and frugal to take thousands of pictures and be able to see them without spending a fortune getting the film developed because he constantly takes pictures of the floor , his feet whatever when he checks the time on his phone.

We had enough rain we didn't have to water as much as normal. We don't pay for water (in country have water well and septic tank, leach bed) but we do pay the electric to run the water pump (yep no electric means no water for anything). I moved the flowers off the porch to get the rain also.

Windows and doors open every morning, I close them up if going to be very humid or hot with no breeze unless I was running in and out from the gardens due to canning. Curtains are clipped close with binder clips to keep some of the sun out. I see no point of closing them completely and then turning on the lights to work since the house doesn't get that hot with the curtains clipped.AC off at night after the sun sets and I turn on a fan but don't open the windows if it's not going to cool down or humidity is high.Lights are off as long as the sun is shining. If I need a light for something it's a light that shines only where I need it.

Harvested oregano ("Italian" bunny had a litter and they all like oregano, basil and rosemary but hopped right by the lettuce) and rosemary to dehydrate for the first time this season and probably the last because now her litter is coming with  her and they aren't afraid of my dog who bumps them with his nose to get them to hop..right under him.  A bird was picking on one and he chased the bird off and then brought the bunny into Hubby who carried it back out and put it in the bean field where Mommy bunny goes in and out while I sidetracked Rascal. An hour later Baby Bunny laying curled up with Rascal. I do not need a pet bunny. I don't think Mommy bunny is happy about it either as she was at the edge of the field hopping in and out.

I harvested eggplant, onions, tomatoes, bell peppers,2 small cucumbers and yard long red beans. I gave the beans and eggplant (she has bell peppers and tomatoes)to my daughter who is off work without pay due to having mono.She didn't have time off to cover being off sick so she lost the job. She has an interview on Wed so hopefully she is well enough to hold on to it as the doctor told her she could go back to work. She wants a full time job NOT through a temp service but most companies in her area hire only through a temp service.

I mended 3 shirts and a pair of shorts. Hubby darned two pairs of work socks.

I am out of the sling so I am back to doing most the cooking. Hubby lifts anything heavy and washes whatever I can't pick up yet.We gave the boxed food we bought that he was going to fix to our daughter to help her through this time. She has helped us more than once.

After rehab on Friday I went shopping to try to finish the stocking up.

I used my CVS extra bucks to pay for the Xlear spray along with a $2 coupon. I had enough left over to pick up the last of the calcium tablets I needed for stocking.OOP $3

I used my Reward points at Walgreens to pay for the Gold bond products that I had coupons for also. OOP $ 7.27.

I went to Walmart and got the different beans that was cheapest there along with some clearance items they had I needed also.

I went to Krogers, got buy one get one of pork tenderloin, beef roast, and chicken breast. Their frozen chicken breast was on sale for $2 less than normal and I had a $2 coupon. Bacon was on sale, I had one free coupons and 5 other coupons. Pasta was on sale, between the sale and my coupons I walked out with 4 free pounds of the 10 lbs I bought. I also got toilet paper, on sale and with $2 coupon for 2 -6 rolls...I got 2 packages of cheese for free. I saved over $100 and it took 30 min to check me out with the coupons I had.

I went to IGA and got the buy one get one sale of hamburger and sausage. They also had carrots and celery for half the price of everywhere else so I got 2 bunches of celery and 4 lbs of carrots. I will dehydrate half of it.The sausage is going into zesty chili to be canned. The majority of the hamburger will go into mild chili (using our tomatoes and onions) to be canned. IF there is enough left I will make some salisbury steak for the freezer. I did take some to make a bacon "sushi" roll with hamburger and cheese(free cheese) in it...google BBQ bacon sushi for different recipes. I weaved the bacon slices (the free bacon)and precooked in the oven until done enough to hold shape before adding the hamburger but not so done it was crunchy. I hate slimy bacon.

I canned pasta sauce and tomato juice and put onions to cure. I planted some onions...again.

I need to finish putting everything away and update stock up list.

We continue to research the best way to invest the retirement and how to deal with the funds we will be given for medical. Along with new(to us) vehicles.

We went to see my Daddy and took him to Bob Evans(he is housebound) to lunch. We used a gift card and Daddy paid the balance and the tip. We all saved. We listened to him talk about choices he made when he retired and had to use his assets for 3 yrs for daily living. Hubby's parents did it for four years including buying a house (they rented like we do) and 2 vehicles. Daddy also told me when I caramelize onions to save the juice/oil from them to cook potatoes in or add to soups.He knows I keep pretty much all my meat fats and freeze them.

We went to a friends' home for last of the summer cookout. I made a bacon sushi roll (free bacon, free cheese and cheap hamburger) low carb bread(friend diabetic and doesn't eat grain, on sale cottage cheese and on sale eggs) and part of a pineapple side down cake... I made it for Daddy but divided the cake into 3 round cake pans, cake mix was free and the pineapple was marked down to 59¢) I took a bag of blue tortilla chips (that had been free from Krogers) also. After we started talking about it we figured out NO ONE paid full price for anything that was there.

I bought a new pressure canner that was on sale for cheaper for the parts I need to replace on my old canner. I still kept the old canner, it can be used as water bath until I find the parts at a better price.

I followed WHIO tv instructions to make a way for me to "watch" the eclipse without buying glasses. I remember my cousin making one with the paper and foil also, and then nailing me when I turned to look over my shoulder instead of at the paper. I do have a blind spot in my eye but lucky for me it's not right in the middle to mess my vision up as bad as it could have if she hadn't stepped behind me and shoved my head back to not see it. Years later when the spot showed up Mother told me she felt like turning me across her knee again because of me disobeying my cousin...who by that time was deceased.

I sorted through my seeds for what I can plant for fall and what I need for spring to check with sales. It doesn't look like I need anything. A coworker of Hubby's gave us seedlings of field tomatoes...they are like Roma but thicker skinned because they are harvested by machine. He told us to get a hold of him in the spring and he will give us more if he gets any. He was given them due to a farmer running out of space to place them. He didn't know if they were heirloom or hybrid so I might try to keep some seeds and see if they grow for me next year.

A person at the cookout offered to share his apples with us when they are ready next month. Especially if we are willing to climb the ladder to get them as he doesn't like doing that due to bad knees. Our friend who is the guy's neighbor doesn't like to climb ladders either.

I made caponata from the eggplant and tomatoes from the gardens

I have the 2 beef roasts in the oven to slowly roast overnight to make beef veggie soup and beef and broth for noodles. I will can the broth and the veggie soup. Other canning this week will be zesty chili, mild chili, tomato juice and pasta sauce. Caponata if there is any left.

Can't think of anything else off the top of my head.

Posted by Chef Owings at 6:59 PM No comments: