kids update and I over did it

ER sent Son2 results to his primary, he will next have an appt with her and she will refer him to a cardiologist. IT will take him a month to get into the primary.

Daughter 4 has an appt for a MRI April 19th for her right hip. It's been hurting but she put it off. Figured she might as well get it dealt with now. She has surgery to remove ovary June 25th. The results came back that the cancer is GONE. Doctor is iffy about whether he will have her do more radiation after surgery. Did tell her that it would be 8 weeks after surgery if he does the radiation before he releases her to go to work. That puts her in the end of Sept. Means she is not going to be moving this fall like she wanted to as she has to have 3 months of work showing she brings home 3 times the rent. She is NOT A HAPPY CAMPER. He did put her in physical therapy to help her recover. She is to the point she isn't even able to walk her dogs and the kids have been helping her in that.

Due to Honda suspending production due to lack of computer chips, her earnings at Door Dash also went down. Granddaughter's man said he had to pick up working 7 days a week to make the same he did at 4 days a week to cover their bills as granddaughter is off work due to problems with her pregnancy, having some issues with sugar just like her momma did with her.

It was a nice day yesterday so I decided to clear four garden boxes and put the preen and green in them in south gardens to prep for spring planting in a week or so (snow expected Easter Monday). Yeah , well , I did 21 garden boxes that are 2 ft by 8 ft.  Did not have to really bend over, used a garden rack to smooth the dirt. Some are going to need to be refilled. I helped Hubby transplant 3 of the fruit trees to bigger pots , we have 3 more to do.

When I came in and sat down to drink some water before fixing supper I realized I had over did it. SIGH. The whole body ached and I was worn out. We had steaks off the grill, baked sweet potato, pickled beets and applesauce. I took Bayer back and body before bed. Achy a bit through the night but better. 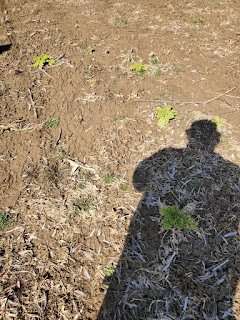 Hubby found these greens growing in north garden, red mustard can't really be seen, kale, frisse lettuce etc. growing again in the north garden. He had tossed some old seed 2 years go out in the area thinking the birds would eat it. It was actually rotor tilled last year in the spring. Daughter 4 got fresh greens every time I saw her. Sent this picture and she laughed.

I still have 2 boxes of herbs to clean up in south gardens. Sage is doing good already. I have 6 4ft x 4ft boxes of strawberries to weed. I was going to transplant them but Amish guy who stopped to see Hubby said to let it go until fall and then only transplant the runners. I would get a better batch of strawberries the following year as strawberries drop in production every 2 to 3 yrs and it's the runners that produce after that. Told me to say something to him or his wife and they would "guide " me to transplanting in the fall. They sell berries a lot during the summer.

I think I will go take a nap as I've been up since 2 thanks to Charlotte barking at a bunny.